Bandai Namco has announced its special editions for Tales of Vesperia: Definitive Edition in North America and Europe, with both regions’ editions up for pre-order now on Playstation 4, Xbox One, and Nintendo Switch. North America receives the Anniversary Edition, which is priced at $99.99 and includes: 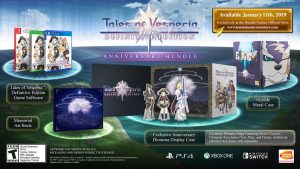 Europe, meanwhile, receives the Premium Edition. The edition is available for £64.99 (£74.99 on Switch) and includes: 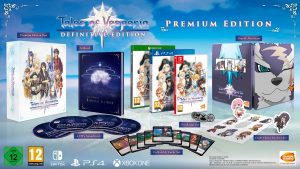 Tales of Vesperia was originally released for Xbox 360 in North America and Japan in 2008 (Europe in 2009), with Japan receiving an enhanced port for PlayStation 3 that includes two extra permanent playable characters. The Definitive Edition will include the content from its PlayStation 3 version along with both Japanese and English voice acting and will be released worldwide on January 11, 2019. The game will be available physically and digitally for PlayStation 4, Xbox One, and Nintendo Switch, and digitally-only for PC.