There’s always an incredibly rewarding feeling on both a mission gone exactly to plan or managing to extract a team out of a situation gone wrong.

Following the revival of XCOM, there has been a bit of a resurgence in strategic western RPGs. One of the most intriguing titles of the bunch is Good Shepherd Entertainment and CreativeForge Games’ Phantom Doctrine, which takes players back into the late portions of Cold War, with espionage and subterfuge being the primary driver of events as players tackle a global conspiracy. One of the key indicators of the quality of strategy RPGs is how hard it is to go against that feeling of “just one more turn” and in its early portions at least, Phantom Doctrine has been very difficult to put down; the main question at this stage is whether that feeling stays present throughout its full length.

There are a few options for players when starting a new game, the first — which comes along with the difficulty selection of three settings plus an optional ironman mode — offers an option between a standard campaign or an in-depth extended campaign that promises to “get to the bottom of things”. However, this second option is greyed out until at least one playthrough has been completed, a decision that could well be justified after the fact but may irk some players going in. The second such choice affects the start of the game, and determines which faction — CIA, KGB, or a third option also unlocked after the first playthrough — players start out aligned with as well as giving a slightly different viewpoint on the early portions of the campaign. These are clearly moves designed to prolong the life of the game and help encourage multiple playthroughs, but raise questions about just how much of the story players might be missing if they just play a single campaign.

Fortunately, so far the gameplay has more than made up for any narrative concerns going in. Players create their own agent, who leads a particular cell initially that ends up striking out on its own after a conspiracy gets going and begins taking steps against the player’s cell. Advancing the story is done by progressing through a particular set of missions combined with conversations with handlers and other contacts. The rest of the game is a mixture of unlocking these missions by earning intelligence, upgrading the cell’s hideout and agents, and taking actions against opposing cells. This is primarily done by sending agents to investigate suspicious activity across the world, which leads to plenty more missions involving tasks such as assaulting enemy hideouts, rescuing informants, and so forth. Time is advanced at the players choosing, generally in hourly-batches, while they view the world map and are highlighted to the various goings-on across the globe. 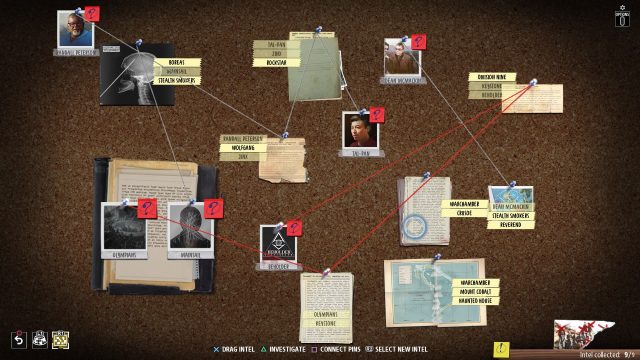 Adding all that string is quite satisfying.

Once players have acquired enough intelligence to progress the story missions, they will still need to tie things together on the investigation board. This sees players working through the various documents, finding important keywords, and then linking them together in order to find a specific location and/or person. The pieces of intelligence themselves are pretty generic and the actual contents don’t add much to the narrative, but there’s a nice sense of accomplishment in first finding those keywords and seeing the board progress from a few disparate documents and photos into a spiderweb of connections. The story itself hasn’t provided many huge surprises, if only because characters and the faceless opposing conspiracy haven’t been given too much chance to shine or explain their motivations and goals, but it’s more than made up for by the thoroughly engaging gameplay loop the investigation cases provides.

Turn-based tactical missions involve sending a squad of between two to six agents into various areas, such as compounds or urban buildings, to first accomplish particular objectives and secondly get out safely. Missions usually start out in a stealth investigative mode and it is encouraged to do things stealthily for as long as possible, because once the alarm is raised the chances that not all agents will be extracted unharmed (or even at all) increases massively. The alarm can be raised by cameras, enemy agents, or civilians seeing agents in areas that are off-limits, as well as any gunfire sounds, so players will need to think their actions and movement through carefully. If the alarm is raised then not only does the danger come from those enemies still up and around, who are now on alert and actively hunting the player’s agents, but reinforcements will be sent along with other potential dangers like air strikes coming down on agents left in open areas.

Phantom Doctrine’s movement is grid-based, though the environment designs do a nice job of keeping things looking natural. One thing that players will need to consider is that when combat breaks out, line-of-sight is not what it may appear to be; characters that are hiding around a corner and the like can still be shot at. There is no such thing as a miss in Phantom Doctrine, but those with high awareness, armour, or cover take much reduced damage and can potentially dodge an attack entirely. Characters have two movement actions per turn, and one attack action, but many types of special actions — such as unleashing a full burst on a heavy weapon — will also use up one of the movement actions. The flow of missions works very nicely, and there’s always an incredibly rewarding feeling on both a mission gone exactly to plan or managing to extract a team out of a situation gone wrong, even if it warrants more reloading during missions than the writer would care to admit. 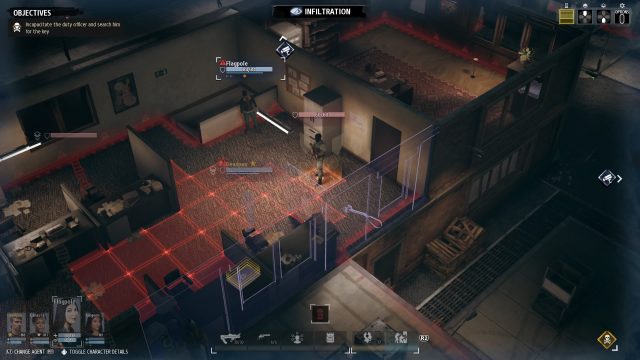 Some enemies aren’t very aware. They wake up quickly once the alarm goes off, though.

Agents do not heal after missions, instead they must be given time to recuperate back at base, during which time they cannot partake in any other actions. The difficulty options accommodate a vast array of abilities. The easy mode is more than welcoming for players new to the genre; its tutorial isn’t as adept as it could be at getting players accustomed to with many aspects, but Phantom Doctrine is one that players can get to grips with quite naturally as they play through its first few chapters. Those more familiar with this style of game are also catered for with the higher difficulty options, which require much more strategic thinking and risk-taking, limiting the advantageous options that those on easy have access to — for example, on all levels above easy, silent takedowns require the target has less health than the agent.

The hideout is where all mission preparation takes place, including recruiting new agents or training current ones, crafting weapons and tools, and forging new identities for agents that may have had their cover compromised. There are lots of options, though the deeper parts of this — such as the MK Ultra facility where players can plant sleeper agents inside enemy cells, or recruit enemy agents to their cause — don’t come into play much early on. They likely get the most use from experienced players on the higher difficulties — especially as the opposing cells become more active in trying to stop the player through their own nefarious means. The hideout has a danger level that increases in various ways such as mission actions, the presence of enemy cells, and recruiting agents, and once this gets too high players will want to move somewhere else before they find themselves assaulted by the enemy. Fortunately, this keeps all facility upgrades intact, as upgrading facilities and keeping agents at the top of their game is expensive.

During the campaign, players will get event prompts regarding agents caught in suspicious behaviour, which gives players a series of options to deal with that may have consequences good or bad. One example seen is an agent that appears to be double-checking all the intelligence that comes their way. After taking the lightest option of just surveilling them (the most severe always appears to be a paranoid execution just to be safe, which comes with the obvious cost of a lost agent), the agent was cleared and the fact they were left alone to do a thorough job resulted in affirmed loyalty to the cell.

After ten to fifteen hours, Phantom Doctrine has got its claws nicely sunk in. The loop of sending agents out to investigate suspicious activity, undertaking missions, upgrading the hideout and agents, and using intelligence to solve investigations has been thoroughly engaging. Provided the rest of the game keeps up with its strong opening, Phantom Doctrine is very well set up to be one of this year’s pleasant surprises and one that strategy fans be will happy to sink many hours into throughout multiple campaigns.