So, I hinted last week about the game I spent the most time on in June. In case you did not guess from my tweets or you missed our podcast, I chose Icewind Dale: Enhanced Edition. I feel many perceive this game as the bastard step brother of that supposed superior sibling, Baldur’s Gate. However, I honestly enjoyed this one a bit more. Allow me to explain. 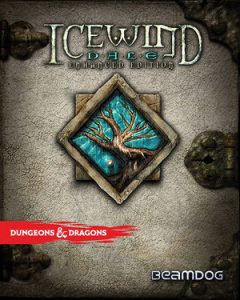 I watched a video recently that compared the western role playing game style (WRPG) to the Japanese role playing game (JPRG). The speaker in the video challenges us to consider an unorthodox perspective on these two sub-genres. He proposes that JRPGs consist of those games where you play the puppet master on another’s journey. When you think of games like Dragon Quest IV or Final Fantasy VI, the story and characters are largely predetermined. You simply experience their story while calling the shots from the back, so to speak.

In a WRPG, you play the role of the main actor. You call nearly all of the shots. In this sub-genre, you often make the character(s) from scratch, determine what to do next and you just feel that the story revolves around your decisions or your team. Icewind Dale: Enhanced Edition certainly exemplifies many of these characteristics. It does lack an open world structure that you see in well known WRPGs such as Skyrim, as it forces you to play through a largely predetermined plot. However, it makes up for this in other areas. Primarily, in this game, you create a party of six characters from scratch, choosing race, gender, class and appearance for each one. Personally, I found this very refreshing. I created myself (as a wizard), and created my wife and friends as party members and instantly felt connected.

The original Icewind Dale already allowed players to get pretty deep in customization with hundreds of spells, a dozen weapon proficiencies, and more. The enhanced edition goes the extra mile in this regard by adding numerous new classes and class kits. For one of my fighters, I chose the wizard slayer kit, which allows an innate resistance to magic, but comes with the drawback of an inability to utilize most magic items. While I did not always make the best decisions, this group felt like my team, imperfections included. 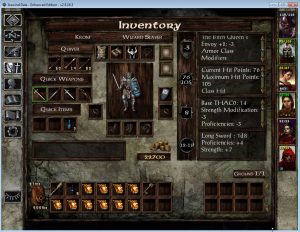 Krom has a low charisma score, but carries a big stick!

Icewind Dale: Enhanced Edition tells a fairly standard Dungeons & Dragons story about a great evil trying to take over the land, with a few twists and turns that most will see coming. NPCs in town will chat with you and offer plenty of dialogue options to work through, with many villains doing the same during confrontations. Most eventually lead to the same end; however a few conversations will allow the player to bypass a combat encounter if they choose wisely. I only paid half attention to the main plot, but I enjoyed the interactions and listened to every line of dialogue.

Of course, as I mentioned above, as a WRPG, Icewind Dale: Enhanced Edition feels like my story. For example, in speaking to friends about the game, I may mention how Sharlina, my rogue, would carefully scout out enemy groups, occasionally getting into big trouble when spotted. Or I may mention how Phil, my wizard, would constantly cause monsters to trip over each other through his potent combination of stinking cloud and grease spells. This allowed the other team members to tear enemies apart from a distance.

Along those lines, Icewind Dale: Enhanced Edition features countless spells, magic weapons, items and more. One of the awesome things about a single player focused game like this is that developers do not mind giving players truly awesome items that have the potential to change the way a character plays. Lothar, my dwarf, found a really awesome axe that returned when thrown. This made him one of our best ranged characters, as it allowed him to utilize his strength at a distance, something most distance weapons do not do. I had not planned on this, but finding this effectively changed his role on the team in many combat encounters. Then there was the scroll of farsight that Phil the wizard found. It allowed him to contact entities from other planes of existence. Normally, I would not consider spending precious coin on a spell like this as it seems somewhat gimmicky. However, since I just found it, I gave it a try. A spirit appeared and agreed to answer all kinds of questions for me. While others may look up treasure locations in an online walkthrough, real adventurers reach out to greater powers to obtain the answers they seek! Moments like this really made my experience memorable. 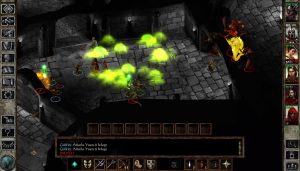 Who will win? Only the dice can tell!

Combat feels well balanced, with some difficulty spikes in places requiring the player to consider new strategies. One of the encounters I ran into had me reloading over a half dozen times. I walked away for a bit, pondered the challenge in front of me, and reviewed my team’s abilities. After much thought, I devised a new strategy and approached the fight from a different direction. It worked, and I enjoyed the satisfaction that came with a victory well earned. I honestly wish that the combat system stuck to its turn-based roots. I feel this pain especially in casting area of effect spells where groups of enemies can move to an entirely different place between the time I start and finish casting a spell, causing it to miss entirely. The series as a whole lost some tactical control and depth with the move to pause and play. However, I eventually adapted and really enjoyed my time with the game from beginning to end.

Icewind Dale: Enhanced Edition utilizes the Dungeon & Dragons 2nd edition ruleset. These rules have unnecessary complications and unintuitive design choices making it harder for new players to approach. For example, the lower your armor class is, the better you are protected. An armor class of -10 is vastly better than an AC of 5! While I did not review it, I recall that the instruction book itself had dozens of pages (many dedicated to spells and monsters). These elements make this game intimidating for most, but I highly encourage RPGamers to take the time to dive into it. The depth offered in character creation and combat pays off for those who carefully plan their parties. Given that I grew up playing these older editions, this felt like a comfortable old pair of slippers. I had little challenge just jumping right back into it. 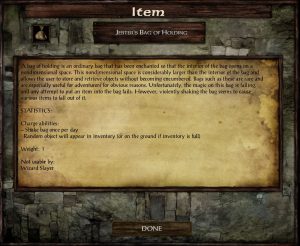 I daresay I even enjoyed this more that the original Baldur’s Gate. While I do not dispute that Baldur’s Gate had superior writing and memorable party members, they were not truly mine. The trade off for this, the ability to create your entire party from scratch, made for a unique experience apart from its more famous predecessor and for me, it had a more distinct WRPG flavor as a result. I totally encourage old school RPGamers to dive in and play this game!

Coming Soon: While my journeys include RPGs from many different consoles and sub-genres, I spend most of my time playing PC games. Expect a great focus on PC RPGs from the way back when, right up through yesteryear, here on the RPG Backtrack Side Track. Along those lines, next month I will be diving deep into the pool to find a radiant game that had a huge impact and influence on computer and console role playing games for decades after it. If you know what game I plan for July, send me a message on Twitter for YOUR chance to win a game from Good Old Games!