Murk Outside; Murk Inside

Prideful Sloth initially released Yonder: The Cloud Catcher Chronicles for PlayStation 4 and PC back in 2017, but has now brought the open-world adventure to Nintendo Switch. It’s not a game that will appeal to all RPGamers — for example, there is a distinct lack of anything remotely resembling a battle — but it does what it aims to do very well. Yonder is all about offering a relaxing open-world adventure, and that’s what it delivers with a setting that’s highly enjoyable to be in.

Yonder‘s story is pretty bare-bones; the player-created character finds themselves shipwrecked on the shore of Gemea, which is in the process of being taken over by a poisonous miasma known as the Murk. Fortunately, the player character has the incredibly rare ability to see and interact with special beings called sprites and is thus tasked with collecting and using them to wipe away the Murk and save Gemea, and that’s pretty much the entire plot.

The lack of substantial story also applies to the many sidequests and NPCs that can be found around the place. Some quest givers will offer a couple of lines to provide the mission objective but that will be it; outside of that there is just a base set of generic lines, mostly regarding what items towns are currently interested in buying or selling. The actual quest goals are also not very interesting, almost invariably amounting only to delivering certain items, and there is never any follow-up. The most narrative that appears comes at the very end to tell the story of how the Murk appeared in the first place, though it all feels a bit forced and doesn’t really hold up to much scrutiny. 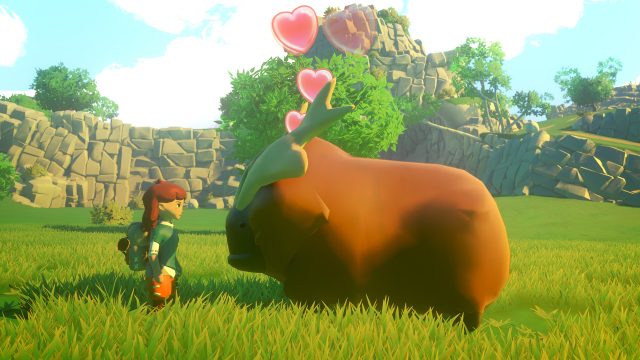 One of the more fearsome inhabitants of Gemea.

Though the narrative is weak, Yonder makes up for it by giving players a surprising amount of engaging and addictive things to do. The primary appeal of the game is in the relaxing way players can go about tending their farms, wandering around the beautiful landscapes collecting resources, crafting hundreds of items, planting trees, fishing, and so forth. Yonder is all about letting players just immerse themselves in Gemea, enjoying exploring all the nooks and crannies while picking up useful items, and the game rewards this with an ever-present feeling of contentment. Even when something annoying happens, it’s very hard for that feeling to linger in the atmosphere it provides.

Yonder doesn’t offer much hand-holding, though it doesn’t particularly need to given that there is no danger of players being waylaid by any enemies. The only issue with this is that it fails to properly give an example of how further sprites can be found, and what appears to be specifically geared as the second sprite — perhaps the only significant barrier to progress in the entire game — is very easy to miss. Outside of this, however, there is nothing that will prevent players from progressing; the game is quite happy to point players where they need to go, and more than enough sprites to deal with the most stubborn areas of Murk will be gathered through natural exploration after that early point. There are methods of fast-travel, but these are a bit restricted; however, considering a lot of the appeal in Yonder comes from simply wandering through its open-world and the fact that the world isn’t of prohibitive size, complaining about them feels pernickety.

The deepest parts of Yonder are its crafting and gathering systems, which look pretty basic on the face of things but have plenty of depth. Nearly everything players come across will be used in crafting in some way; whether this be items such sticks and stones lying on the ground, or resources that need a bit more work to collect such as by chopping down trees or mining veins. These resources can be used for many things such as building bridges, and more advanced things like livestock pens usually require multiple layers of crafting. Players can also pick up some materials through barter-style trading, and there is a light economical feature, as some villages will value certain things over others. There are multiple farmsteads that can be built to provide even more resources, with players able to plant crops and trees as well as adopt wildlife by crafting and placing the requisite items. Farms don’t require much looking after, just an occasional visit to reap the rewards and clean up, though even the latter isn’t needed if players choose to recruit a farmhand by simply giving the chosen villager enough food. 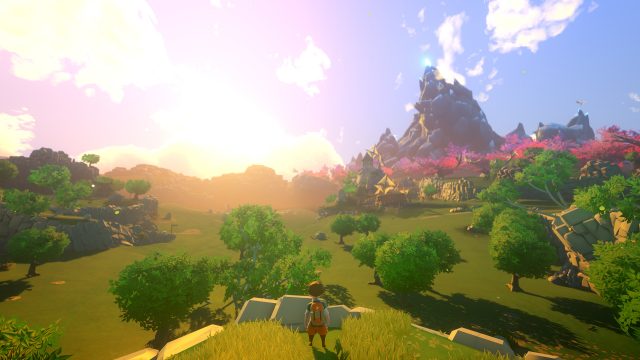 Yonder is a mighty pretty game.

There is plenty to do in Gemea; on top of the crafting aspects there are also collectibles, such as planting trees in all the available plots and finding the many cats scattered around. However — likely a side-effect of making the game more welcoming with straightforward controls — once all the exploration is done, things start getting stale fairly quickly. The methods for building or collecting different objects are basically the same. Nevertheless, there is more than enough to keep players engaged for the life of the main campaign, which should run around ten to fifteen hours for most.

The visual design of Yonder is great. The world is highly enjoyable to explore, with lots of brilliant views, and a good variation between all eight zones that run the gamut from a scorching desert to snowy mountains. The graphical style works to its benefit with some incredibly sweet wildlife adding to the graphical charm. The audio is strong as well; the music does a great job matching the environments, and there are strong audio effects throughout, such as when chopping trees and when it begins raining. Yonder is a nice match for the Switch, and both runs and controls great in TV and handheld modes.

Yonder doesn’t have quite the same lasting power that other crafting-focused games may have, but makes its experience notable with great presentation. It’s a game that welcomes players into its laid-back and relaxing atmosphere. For those just wanting to spend some time chilling out and exploring in a great-looking world, Yonder: The Cloud Catcher Chronicles is certainly one to recommend.