Virgo Versus the Zodiac Review

Fate Is Upon Us

Though coming at the end of 2019, Moonana’s Virgo Versus the Zodiac makes a strong claim to be one of this year’s more interesting titles. Some at first glance might dismiss it as simply a retro throwback, but doing so is a great disservice to a title that brings plenty of interesting ideas and system interactions alongside a story that oozes moral ambiguity. There are times when the sheer number of ideas starts to overwhelm its ability to properly convey them all, but the game keeps ticking along at such a pace that players are happy to get swept up among the stars.

Virgo Versus the Zodiac is set in a bizarre version of the Milky Way, where some time in the past the twelve Zodiacs changed from their rotating time-controlled rule to each running their own part of the galaxy. However, Virgo is aghast at this change and has set out to bring back the Golden Age of before by retrieving the crowns of all the other Zodiacs. The game begins with her and her cookie companion Ginger infiltrating Capricorn’s realm, which comes in the form of a construction corporation, before heading to other realms, encountering all of the other Zodiacs along the way. 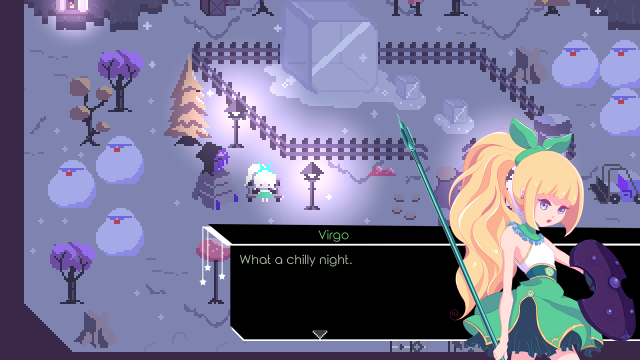 Virgo does a good job skirting the line between likable and villainous.

The universe is built on twelve qualities divided into the three astrological groups: Mutable, Fixed, and Cardinal. These qualities play important roles across nearly all elements of the game — not just in how all of the characters are written and how some of their interactions with Virgo end up playing out, but also as a key part of the combat system. These qualities are often taken to logical extremes, meaning that though Virgo’s quest is villainous by its nature, few of the other characters come off as being in the right either. Part of this is due to the game’s refusal to offer much context to what is going on in the wider scheme of things, only really revealing the point in collecting the crowns about halfway through. The game’s pace means that the story ticks along nicely, though the obtuse storytelling may cause some to tune out.

There’s clearly scope to change things in different playthroughs alongside the promise of multiple endings, but it’s hard to get a handle on how things might be different, particularly when certain events are written as though they were inevitable, and it’s unclear whether the melancholy ending received in the review playthrough is par for the course. The game is sized well for its content, coming in at a little under fifteen hours with a bit of time should players wish to devote themselves to the sidequests occasionally dotted around, so replays are certainly not the most taxing thing to undertake, but it’s not made as clear as it could be as to the effect players have on proceedings. But despite those quibbles, the story remains an engaging one thanks to its strong cast, the varied and often conflicted relationships, a few great emotionally-charged scenes, and good use of Virgo’s moral uncertainty and her reluctant teaming up with allies Spica and Algol.

The turn-based combat features up to three combatants to a side, each character getting their own slot in the order. Positioning plays a role, as melee attacks can only hit the character in front, with ranged and AoE attacks also present. In addition to the HP bar, there is a blue secondary bar known as the Purity bar, which is raised by defensive abilities but reduced by attacking ones. This principally acts as a mixture of a shield and temporary hit points, but crucially also provides the opportunity for a counter-turn. If a character is attacked while they have any amount of Purity and a relevant skill available, that character will get to respond immediately with a counter-turn. On top of this, the turn-based system is complemented by real-time inputs both when attacking and defending. This most often comes in the form of a timed button press; ideal timing will boost attacks and apply any relevant status effects when attacking or reduce damage and sometimes prevent a status effect when defending. 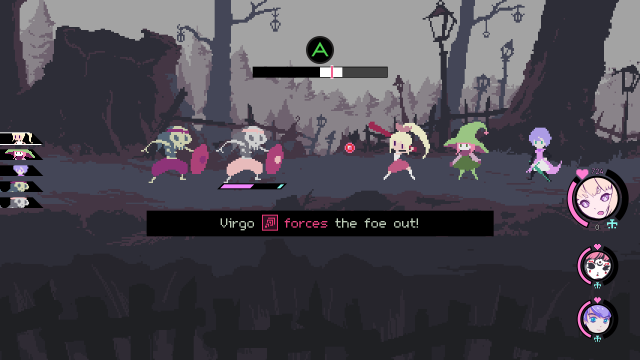 There is a linear leveling system, but character skills are determined entirely by their current equipment. Each character has four offensive slots and four counter slots, and each piece of equipment is unique to one of those slots. Each piece of equipment comes with three attribute modifiers, but one of these will always be negative, meaning players can either hedge with their combination of modifiers to not let an attribute get too low, or go all out on one particular area. Offensive skills are exclusive to each character’s regular turn, while counter skills are exclusive to counter-turns.

The three astrological groups’ role in combat comes from this skill and equipment system as each one belongs to one of these qualities. Each quality relies on a different attribute to determine its effectiveness, while a rock-paper-scissors triangle between the three of them adds another layer. Emergency healing is provided by drinking tea, coffee, or lemonade, which also gives a short boost to one of the three main aspects. In addition to potentially being countered, some skills have cool-downs, so combat is all about picking the correct moments to go on the offensive or knowing when to consolidate, which may even include skipping a turn. The combat strikes a great balance between pace, tactics, and ease to get the hang of, while the additional planning of equipment and skills will suit those who like to seek mastery and challenge.

The controls are set up so that one of the face buttons is used for each character. This adds a layer of attention when defending attacks, but is somewhat confusing for the turn-based inputs. This applies particularly to Algol, as the B button on the 360 controller becomes the confirm button on her turns, and there were multiple times where the desire to go back and rethink was scuppered by an accidental confirmation instead. Players will come across lots of equipment as the game progresses, especially if players fully explore their surroundings, although keeping on top of this can become a bit of a chore towards the end. The equipment is balanced so that there are  always trade-offs to consider, which makes it a slow process in figuring out and reminding oneself which ones work well in conjunction. Virgo Versus the Zodiac comes with a crafting and upgrade system that can at least help in getting rid of extraneous equipment. 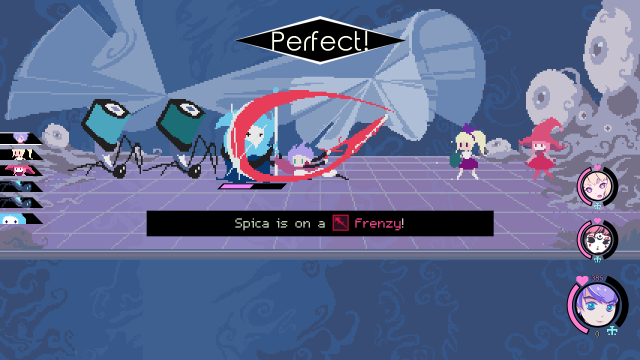 Enemies and equipment are colour-coded for your convenience, though there is a chance it will pose some difficulty for those with colourblindness.

Players can adjust both the enemy difficulty and pace of the real-time inputs from the pause menu, though there isn’t an option to automate the latter. The game’s standard difficulty options provide a strong challenge, and players who attempt to go all out will quickly find themselves defeated. If players lose a battle, they are given the opportunity to retry immediately with no cost, but there is no opportunity to change equipment or difficulty between retries, so players may need to return to the previous save if they go into a battle too disadvantaged. Boss fights are a definite step up from regular fights, and almost invariably consist of multiple stages. There are no random battles, though players can go into special Black Hole realms at certain points in order to grind and earn some extra bonuses if they wish. The game also features a sh’mup mini-game that can be attempted between chapters, though doing so is entirely optional.

The pixel art graphics feature lots of adorable designs and the effort put into each realm is clear in the layouts and the small, often entertaining comments when interacting with many of the fixtures. This comes with a few fun animation touches, such as eyes in the walls that will follow players when close. Combat is decently animated, but there is a possibility that the game’s reliance primarily on colour to signify damage and defense types affects those with colourblindness. Many of the events and all of the character portraits are static, relying almost solely on the writing to convey, but the writing is strong enough to carry it off. Virgo Versus the Zodiac’s music is certainly a strong point as well. The game features many catchy tracks that mesh nicely with the general pace of the game as well as its varied locations, and players can expect to catch themselves humming along multiple times. There is no voice acting, with speech using retro blips, while the sound effects complement the combat nicely without becoming grating. It feels like the game makes a smart choice in having its great music as the foreground of the audio.

Virgo Versus the Zodiac does a fine job of standing out from the crowd. Its ideas and characters remain engaging throughout, aided by the highly enjoyable music and varied designs. There are times when its inscrutability comes to the fore, but the game pushes past those quickly enough to remain enjoyable. It’s an easy recommendation for anyone who either wants to try something a little bit different or just wants a strong RPG experience.

Tags: DegicaMoonanaPCVirgo Versus the Zodiac