Though Utawarerumono: Mask of Deception had some significant issues with its pacing that prevented it from being a standout experience, it showed more than enough potential in its second half that the concluding part of the duology had the promise of being able to bring the overall tale right to the top. Utawarerumono: Mask of Truth has made good on that promise. A much better balance between combat and story, more consistent pacing, and a fascinating story full of excellent characters make the tactical RPG-visual novel hybrid a great and memorable experience.

It’s impossible to give the premise of Mask of Truth without massively spoiling the second half of Mask of Deception — which players will really need to have played through before tackling Mask of Truth — but it picks up right where the previous game left off, wherein the party is having to contend with the aftermath of the events that have split the Empire of Yamato. What follows is a civil war story that comes with considerations of outside influence, leading to further surprises as both sides attempt to deal with what is thrown at them, but which maintains a strong attachment to the stories of its individual characters throughout, impressively tying it all together.

One of the major issues of the first part of the duology was that it didn’t utilise the strong battle system enough, particularly in its first half. Mask of Truth rectifies this, featuring a story that works as a better complement to the battle system to provide opportunities for players to enjoy it in a more consistent manner, rather than leaving multiple-hour gaps without combat as its predecessor did. It should be noted, however, that it is still more heavily weighted to the visual novel side of things. The battle system is pretty much exactly the same as its predecessor, appearing as standard turn-based tactical fare with characters going individually. Characters can move and either attack or heal once per turn, though certain characters pick up abilities allowing them to both attack and heal or move or attack twice instead.

Instead of selecting single actions, each character has between one and three action chains — an attack combo — to choose from, often with different ranges or areas of effect. Action chains are interactive: when an attack is launched, a prompt appears, either requiring a timed press of the X button or for it to be held down for a certain period, and succeeding at a prompt causes a critical hit. This also works on defence, as party members (and enemies) will sometimes be able to brace themselves for, or even completely dodge, certain attacks. In addition, combatants have a Zeal meter that is boosted (or can be reduced) by actions, critical hits, or successful defences, and when it reaches 100, that character enters an elemental Will state. Entering this state causes that character to act immediately, or again if it happens on his or her turn, with various stat boosts and the potential for a special final strike. 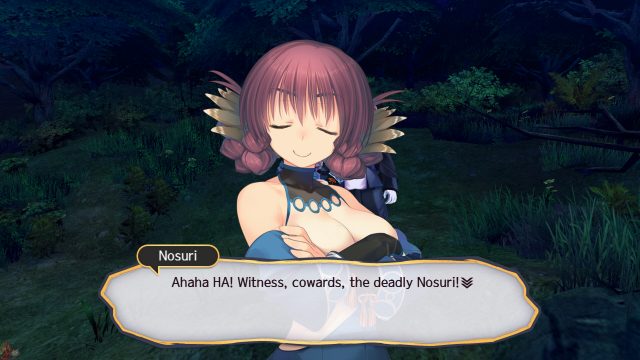 The Nosuri is one of Yamato’s most feared apex predators.

Like its predecessor, Utawarerumono: Mask of Truth is very player-friendly with its combat by allowing a complete rewind option, letting players go back to any point in the battle if they realise a tactical error has been made. In fact, the game actively encourages players to rewind and try again if they fail an action-chain prompt, though it’s not usually a disaster if they do. The combat system initially appears straightforward, it is clearly very well designed and there are a lot of tactical considerations to be made in combat. Enemies will happily punish players who send weaker units out too far, and the well-timed entering of a Will state can turn the battle. There are also times when not attacking a certain enemy may be the best option, particularly if attacking might cause that adversary to enter a powerful Will state at an inopportune time. The designs of the battles are well thought out and nicely varied between large groups and powerful bosses, and though some characters often feel immensely powerful, there is a strong, consistent balance throughout.

There are no equipment shops or items to be used in the game, a decision that works well by making players consider the characters and tactics a bit moreso than just stocking up and winning through sheer attrition. The only things that can be equipped are skill scrolls given as post-battle rewards that provide passive bonuses, as well as potential options to defend action chains as mentioned above. Leveling is automatic, with even those who don’t participate receiving decent amounts to keep them fairly in line with everyone else, though players do have the option to further boost certain stats using Battle Points obtained in combat.

Of course, it’s no use having better utilised combat if the story doesn’t hold, but Mask of Truth‘s is up there with the best of them. As Yamato breaks out into civil war, there is a greater focus on the highly intriguing military and political machinations. Mask of Truth does a great job with tactical decisions believably impacting both sides in positive and negative ways, albeit with a bit of leeway given for a couple of exciting unlikely victories. The story takes many twists and turns, and though some of the more high-concept aspects introduced in the latter parts of Mask of Deception take a backseat for much of the game, the way they are pushed back by the more immediate concerns of the civil war makes complete sense and is smartly handled. 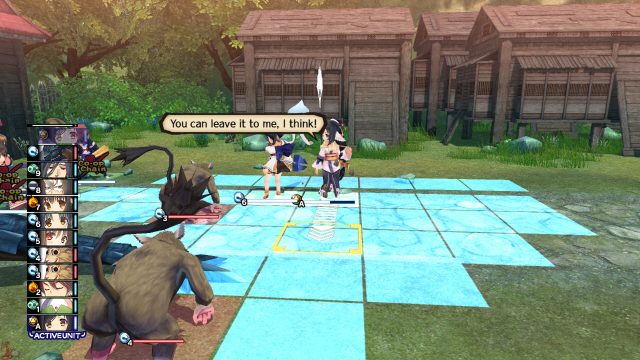 You think? Thanks for the confidence.

The story is helped by an excellent and memorable cast. All of the returning characters from Mask of Deception get even more worthy development to their personal stories, while the new cast members introduced in Mask of Truth only add to the tale. There are more solid connections to the very first Utawarerumono game, an initially adult-only visual novel released just in Japan, and these should provide an added bonus for veterans of that game. They aren’t necessary to understand the current title’s events and backstory, however.

One potential knock against the story is that it does still rely a bit on the tired “oblivious to love” and “unwanted harem” tropes. These are thankfully a lot less pronounced than in the previous game, but there are still times where they make appearances. The greatly improved blending of events and overall pace of the story mean that at least these are much less of an issue than they were in the first part and don’t actually hinder a fantastic and hugely rewarding story. The usage of some complex Japanese proper nouns may fly over players’ heads a bit, and while translations to English may have been possible, keeping them simply Romanised has a good effect with the game’s style and the theme of Haku’s background. Again, it’s a minor quibble in a superbly told tale that offers great depth throughout.

While it’s certainly not one of the most technically impressive visual experiences, the game’s overall style is effective. The UI and the character and background art are very pleasing. The 3D models used in combat and event scenes admittedly aren’t brilliant, though characters are easily identifiable and animated well throughout. The audio work is also very strong, with excellent Japanese voice acting meaning the lack of an English option is not missed at all. The orchestral soundtrack is a pleasing listen throughout, with the game making good use of various songs performed by Japanese artist Suara during many of the more emotional events.

Though it still won’t appeal to those who don’t like reading lots of text in their games, it’s amazing how much an improvement in pacing can do. Mask of Truth takes what Mask of Deception‘s second half had finally started to do and gives the characters and story the telling they deserve. It must be said that without the slow build-up to put everything in context and build the emotional connection between the characters, the latter parts might not have paid off as well as they did. In the end, it’s highly satisfying to be able to say that across its combined fifty-hour total, the Utawarerumono duology has been a hugely rewarding experience with a story that will linger long in the memory.