First of a Two-Part Tail

Utawarerumono: Mask of Deception is a bit of a strangely mixed bag. Like a previous title created by Aquaplus and Sting, the PlayStation 3’s Tears to Tiara II: Heir of the Overlord, the game combines visual novel storytelling with tactical RPG combat. However, the game doesn’t hit the possible heights for either of these two aspects due to too long being spent wasted on meaningless events in its first half and a simple lack of natural combat. When things finally get going in the second half, it suddenly becomes a much more engaging experience, but the change will come too late for many.

Mask of Deception is actually a sequel to the original Utawarerumono, a Japan-only title which was initially adult-only before an all-ages version came to be thanks to popularity. Fortunately, though characters reappear for supporting roles, knowledge of what they did in the prior game is not necessary to follow things and the game is perfectly enjoyable without it. The game is also the first part in a duology, with Mask of Truth set to tell the conclusion to events in September 2017, and the second game could well end up being key to how the pair is remembered.

The game follows Haku, a young amnesiac who wakes up wearing a hospital gown on a snowy mountain. Fortunately, before he either freezes to death or is eaten by fearsome creatures, he meets a girl called Kuon, who sports animal ears and a tail like virtually everyone else in this fantasy world. Kuon helps Haku find things to do, and he proves adept at tactical thinking, which leads to them joining up with a mercenary band lead by Ukon and traveling with the group to the Empire of Yamato’s capital. 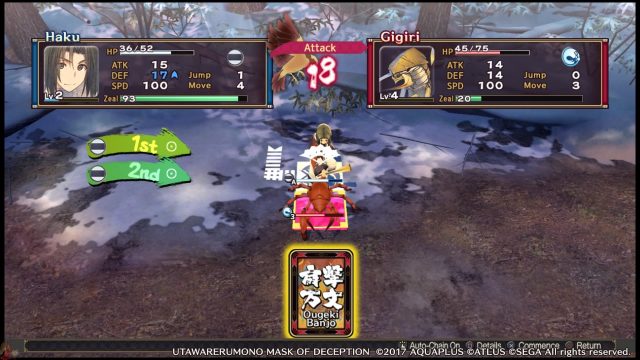 This is one of the world’s smaller scorpions.

Unfortunately, once they get to the imperial capital, the plot just decides to wander off for a lengthy break. Instead, players are introduced to scene after scene of irrelevance. There is clearly an underlying intention of these scenes to try adding depth to the characters and get players to care about them, however, the way it is paced just doesn’t work, especially as any combat that could help break up the monotony is conspicuously absent during this time. There really did not need to be five event scenes about making sweets. These parts also seems to harken back to the days of Aquaplus’s adult-oriented past, as Haku suddenly appears to get loaded with a harem, especially a pair of characters that go about it in a way that many will find to be rather off-putting.

Eventually, Mask of Deception‘s plot manages to get going thanks to outside invading forces, and when it does it shines. Reveals and turns start coming thick and fast, and the full story behind Haku and his presence in the world proves to be fascinating, along with the way the machinations of the important players in Yamato start coming to fruition. The way things conclude will very likely make those who do stuck with it through to the end eager for the second part of the tale, as things are clearly just kicking off. It also should be noted that Atlus did a great job with the localisation, and it really pays off in the second half and the finale. Unfortunately, the handling of the earlier section of the game does the latter part a great disservice.

Combat, when the game actually gets into it, is straightforward grid-based tactical fare. Turns are individual rather than team-based, with most characters getting to move and attack once per turn (though a few characters get more options at certain levels). Many attacks feature a combination of individual strikes, with players able to boost the power with a well-time button press. The button press can also be used to defend or dodge in certain situations if the character has the ability to. Each character only has a select number of skills or attack combos, so most tactical thinking really comes down to choosing whom to attack and sensible positioning. The primary stratagem is not to charge ahead blindly, as both player characters and enemies hit very hard. The game features some user-friendly options, including the ability to wind back to previous points and save during combat. There are options to undertake free battles, but it’s certainly not needed to get through the game. The combat does the job it needs to and is enjoyable, but isn’t utilised anywhere near enough within the base game to stand out. 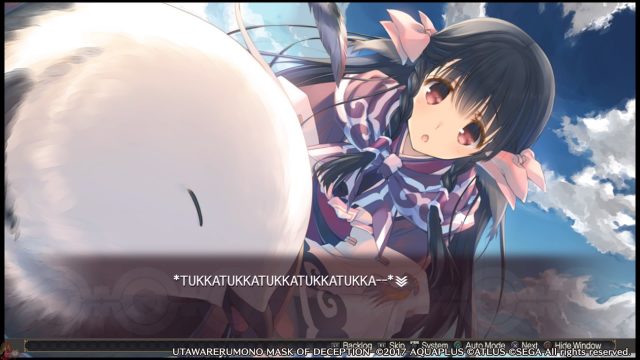 Not quite Tears to Tiara II’s elephant, but an acceptable replacement.

Character development is also very straightforward. There are no pieces of armor or weapons; the only equipment to be found is picked up as rewards for winning previous fights that confers some passive bonuses. Leveling up is automatic, save for some extra bonus points that can be assigned to one of four base stats. Utawaruremono: Mask of Deception is very much a visual novel first and foremost, with some tactical RPG attached on top.

On the visuals front, all character and background art displayed throughout the game is pleasing to behold. The UI style works nicely with the setting and artwork, and all the combat visuals work well, albeit certainly nowhere near the most impressive technical feats. The audio side of the game is also strong. An orchestral soundtrack provides a pleasant backing to everything. The Japanese voice work is good throughout, and as a result it never feels like the lack of English voice overs affects things.

My experience of Utawarerumono: Mask of Deception went through some distinct phases, starting with interest, then devolving into boredom as nothing significant happens for a long while, before finally sucking me back in once things finally got moving. Those coming in expecting a deep tactical RPG simply won’t find one. However, as a visual novel, and ignoring the problems of the first half, its second half did exactly what it needed to do to suck me in. Thankfully, the ending at least implies that the missteps of the first half should not be repeated in Mask of Truth, so taken as a package the two games could end up being a very worthwhile experience overall.