One Wore Black and One Wore Green

Ackk Studios’ Two Brothers evokes fond memories of early adventure games, while providing a few fresh ideas to the genre. Unfortunately, it’s also a title where some of the pitfalls of being a small, indie studio rear up. There are a lot of interesting ideas and a fair share of enjoyable gameplay lying underneath, but the technical issues and lack of execution on some of the ideas take a lot of gloss off the experience.

Two Brothers follows the tale of Roy Guarder. The academic is exploring some ruins with his wife before tragedy strikes and both them are cut down. Roy finds himself in what appears to be the next world, full of colour and vibrancy that is indescribable to his drab world. However, Roy is prevented from moving on with his wife when he is told it is not his time yet, and he is kicked back down to his original world. The memory of this vibrant world stays with Roy and he and his brother Bivare decide to devote their lives to bringing proof of these marvellous colours to their world. Roy discovers that he has the power to freely return from the afterlife whenever he dies, and can even return some of those who might’ve got there a bit too soon. The power is pretty neatly reflected in the gameplay by simply dumping Roy in this next world in lieu of where other games would places game over screen. Here he can explore the afterlife before returning to his previous location by walking off the edge.

Despite the interesting premise, colour doesn’t have a wider effect on the game itself as it might have. Instead it gets somewhat relegated to the position of plot coupons for the vast majority of the game. This is a pity, as when the game gets colour treatment, such as in the afterlife and the final dungeon, it looks good. Instead gamers have to make do with the standard two-tone Game Boy era graphics, which are decent enough and used pretty well but are too lacking to impress. The story comes up a bit short for most of the game as well. It starts off fairly decently, if a bit rushed, but for a large section in the middle, when Roy’s quest to find the colours has been fully established, it all feels rather directionless. When the story does come back to the fore towards the latter stages it does a pretty good job reaching a climax, but until that point it doesn’t hold all that much interest. 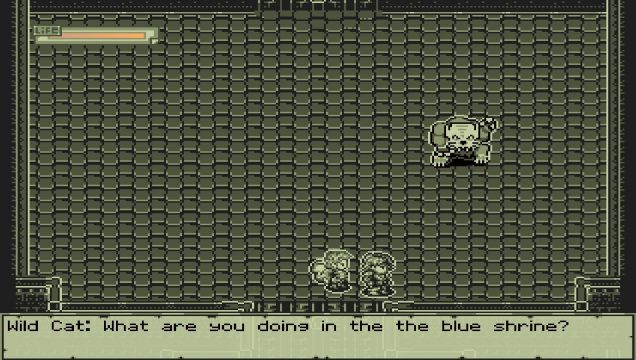 I imagine being about to fight some form of wild cat?

In keeping with its visual cues from the Game Boy era, the top-down real-time adventure gameplay is unashamedly retro. Controls involve using the directional buttons, one button for primary melee attacks, and another for secondary, usually ranged attacks. A more powerful melee attack can be used by pressing both attack buttons at the same time, but this is usually too slow to be useful in most cases. One more button allows Roy to dive into the ridiculously spacious bag carried around by one of his companions in order to change weapons or keep track of what has been picked up, but that’s it in terms of controlling Roy. Roy is often followed around by a companion, who will often attack any enemies that come within range. They’re nice to have, but don’t have much impact, good or bad, on the combat as a whole. The combat is alright; it does the job without being anything spectacular but there are some annoyances. For one, Roy isn’t particularly quick, which makes dodging and positioning quite difficult in some case. Timing and hit boxes also aren’t quite as clear-cut as players might like, especially against the few enemies that can block Roy’s attacks.

The game also harkens back to the older days in terms of its expectations on players. Players are required to figure out where they should be heading next with just a few clues from NPCs or signs to guide them. Fortunately, exploration is enjoyable, with lots of chests or other things to find in the many nooks and crannies. There are no modern conveniences like quest logs or maps, although an overview of the world is at least viewable from the afterlife. This gets some usage as the best way for players to establish where to go next, although the direction as the required order of traversal isn’t as straightforward as the map might imply, requiring at least one track back and then forth again. Players will need to travel to the afterlife to pick up a hint from one or two of those who can no longer be found in the “real” world, although an opportunity to travel back is never far away whether or not players actually want to at the time. At least the journey back is very quick in those many cases the trip is unwanted.

Where the game performs best is in the dungeon exploration. All of the game’s dungeons are good challenges, often requiring lots of exploration, and getting through each dungeon or solving a puzzle provides a great sense of achievement. The variation amongst the game’s challenging bosses also helps keep things interesting, with the most enjoyable ones easily being those that focus more towards puzzles rather than straight out combat. This is partly thanks to the aforementioned difficulty with hit boxes and timing, but also because the puzzles are just the right level of challenge to figure out. Most will probably require at least a few attempts of experimenting before figuring out the correct tactics needed for victory, but there’s usually a nice sense of accomplishment when the bosses do go down. This is another area where the autosave and lack of actual game over is a blessing, as players will be dumped straight where they left off rather than being forced to traipse back for another attempt. A number of bosses or sections reward more experienced gamers with some amusing references to games from the past, such as one that takes several cues from a well-known glitch from Pokémon Red/Blue. 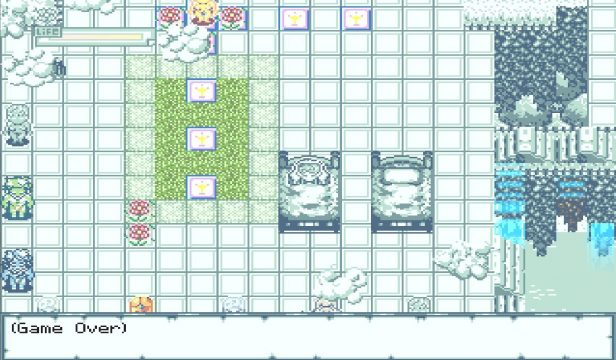 If only I could just jump down and resume from where I died. I can? Excellent.

There is a decent chunk of side content, although most of it is either obtuse enough or requires players to go a bit too much out their way that only the more hardcore completionists will find that much interest in it. There is also a sense the game has been released before it was fully ready as at the time of writing PC users are effectively the game’s beta testers. Almost all bugs were minor, such as out-of-date speech appearing in places, or can be immediately fixed with a quick restart without losing any progress thanks to a near-constant autosave. Ackk Studios has at least been quick in releasing patches since the game’s release, and the one issue that did glitch the save file (the single time the autosave proved a hindrance rather than very helpful) and prevented further advancement through the game was quickly repaired by the developers with no loss of progress.

The game’s chiptune soundtrack is on the whole pretty good and enjoyable to listen to. That said, there a few dud tracks that are pretty grating, but at least the music can be muted with a quick button press when they do appear. Track repetition isn’t at all a problem as there over four hours on music in total over the fifteen or so hours the game takes to complete, allowing all locations to get their own distinct tracks.

Two Brothers will find most appeal with those who grew up in the earlier periods of adventure gaming, when players had to make their own way through the world. Some more recent gamers may take issue with the lack of more current conveniences, but there are moments when the simple enjoyment of exploring a dungeon and its puzzles shines through. The current technical hiccups and weak direction in the middle prevent a full recommendation, but there are good ideas to be found here and Ackk Studios has shown some decent potential that it should be able to build on well in future. 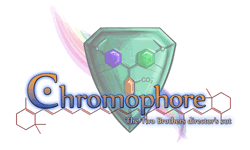