Do you remember Bastion? We here at RPGamer sure do. This beautiful, unique hack’n’slash RPG from Supergiant Games captured our hearts and earned our 2011 Game of the Year award, the first and only indie game in our site’s history to do this so far. It’s been nearly three years since then, but Supergiant Games has finally launched their second game, Transistor, in the hopes of recapturing the magic of its debut title. There’s a lot to love about Transistor, and it does a lot of things really well. Unfortunately, there are also several things it does poorly, and ultimately, Transistor just feels like a weaker game.

The game follows the flight of Red, a singer and entertainer in Cloudbank City who is attacked one night by a mysterious organization. Someone close to her is killed by a strange, glowing blue sword, and somehow her voice is stolen. Red manages to take possession of the sword, the Transistor, which speaks to her as she travels and seems to know her very well. At the same time, strange creatures called the Process are infesting the city and attacking anyone they find, and Red has to battle through them as she flees and then seeks out those responsible.

Like Bastion before it, Transistor features a near-constant narration from Red’s sword, though unlike Bastion, the Transistor isn’t simply telling a story, but is speaking directly to Red herself. As a result, the storytelling feels a bit different from Bastion — it’s more personal in nature, but also less cohesive. The fact is, Transistor‘s story is incredibly hard to follow, to the point that it makes Blade Runner seem heavy handed. The story begins after Red is attacked, and the details of the attack aren’t shown until well over an hour into the game. Even then, they’re spotty and poorly explained. We never learn how or why Red’s voice is lost, or what, exactly, the Process actually is, and the mechanisms that govern the world itself are never entirely clear. Terms like “Trace” and “Specialization” are never really given a definition, though the game suggests they’re important. Even after completing the game, it’s still unclear if Cloudbank City and its inhabitants are real, virtual, or some weird mix of the two. Finally, the ending just comes out of nowhere and will undoubtedly make a few people raise an eyebrow. It’s a shame, because it seems like all these details do exist, but are never shared with the player. A glossary of terms or a journal for players to glance over for more information would have gone a long way to improving the story. 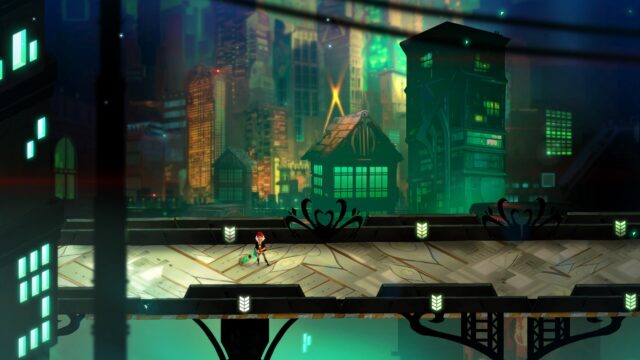 The backdrops of Cloudbank City are stunning.

That said, even if players don’t fully understand what’s going on in the game, Transistor does an amazing job of setting its tone. There’s an impressive sense of hopelessness that grows thicker as the Process spreads throughout the city, and the deep, melancholic speech of the Transistor coupled with the subdued, electronic soundtrack makes it clear that Red’s relationship with her talking sword is far more important than the details of the plot. Players will find snippets about the city’s current events buried in terminals throughout the city, and watching them slowly degrade over the course of the game only heightens the mood.

Even though the story takes a few missteps, the gameplay is actually a big improvement over its predecessor. Transistor features a unique combat system that combines elements of an action RPG with those of a tactical, turn-based one. With her sword in hand, Red has access to a wide array of functions, more of which become available as she gains experience and levels. Each function is unique and has a number of different properties. Players start with Crash(), which deals damage, stuns the enemy, and make it more susceptible to subsequent attacks, and Breach(), which is a powerful, long-range attack, and gain a new function with each level. Players can equip one function to each of the controller’s four face buttons, which make up Red’s move set in battle. Players can customize their functions even further — in addition to equipping them for battle, functions can be combined as upgrades to other functions, altering the attack’s parameters and abilities in startling ways. Every function can eventually hold two upgrades, and finding new, powerful combinations can be a lot of fun. Functions can also be set to one of four passive slots, which provide constant bonuses. The customization possibilities are impressively diverse, but also limited by a resource called MEM. Every function has a MEM cost to equip, and Red only has a limited amount of MEM at her disposal, so players will often have to leave slots empty and functions unequipped in order to make use of the more powerful ones in the game.

In battle, there are actually two separate ways to play the game. Players can approach it like a typical action RPG, moving and attacking in real time, but this isn’t always effective. Some enemies can move too quickly for players to catch up to them, and most have strong, long-range attacks. Because Red has few ways to avoid incoming projectiles, players will have to couple this with the Turn() function, a unique ability that is always bound to the right trigger. While in Turn() mode, players can plan out their attack while the action is paused, but each action, even movement, eats up the limited turn bar players have to work with. Once a plan of attack has been decided and executed, the assault happens nearly instantaneously. Unfortunately, it also leaves Red in a weakened state — while the Turn() function recovers, she is unable to use functions and can only run. There are some exceptions to this, however: certain non-damaging functions like Mask() and Jaunt() are usable even while Turn() is recovering, and the Jaunt() function can be used as an upgrade to make any function usable during Turn() recovery. The battlefield is usually rife with cover that players can use to avoid attacks, but it’s also destructible, so the best course of action is often to keep moving. Players will have to learn the best times to use Turn() and the best times to play normally, and will only be successful by combining the two methods. It’s a unique system that works surprisingly well. 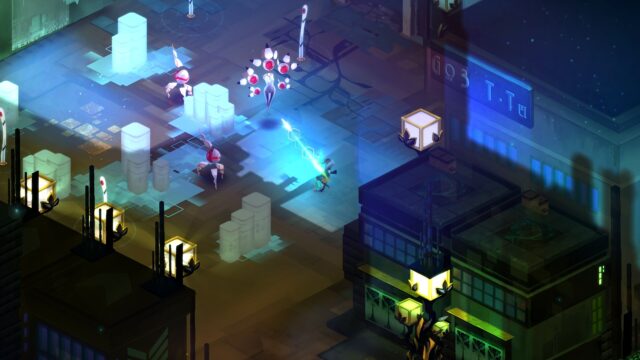 Red has to use all her powers to defeat the Process.

One of the most interesting facets of Transistor is how it handles death. Though Red’s health is automatically restored at the end of a battle, for the most part, players will be unable to heal her during combat. A few functions provide very limited healing ability late in the game, but for the most part, damage taken remains that way until the battle is over. Luckily, if players do exhaust their life bar, the game doesn’t end. Instead, one of their functions, usually the one with the highest MEM cost, will overload, restoring Red’s health bar but becoming unusable until she reaches two more access points — special locations used to change her function loadout. Losing a powerful function to an overload is a major disadvantage, and makes the remainder of the battle much harder, but it also prevents players from seeing an untimely game over, unless of course they overload all their functions.

Like Bastion, Transistor also has a unique way of handling difficulty customization. As the game progresses, players will gain access to special Limiters, which, when equipped, increase the amount of experience earned at the end of each battle. This bonus comes with a drawback, however, as Limiters also cause the Process Red will be fighting to gain new powers, some of which are mere curiosities, but others are dangerously powerful. Players will have to balance risk and reward when deciding which Limiters to use and which to leave alone.

Unsurprisingly, Transistor is a visual treat. Cloudbank City is beautiful to explore, and the world is constantly changing as new pieces of cover grow or shrink out of the ground. The character and enemy designs are excellent, and the animations are fluid, and little details like the sparks that trail behind Red’s sword as she drags it across the ground really stand out. The game makes use of still artwork surprisingly often, and these moments can sometimes feel out of place, even if the artwork itself is excellent. The game’s soundtrack is much more subdued than Bastion‘s was, melting into the background and keeping out of the way rather than popping to the forefront, but it works extremely well in context with the game, and there are notable exceptions to this general rule, such as the game’s wonderful vocal theme.

While it would be hard to call Transistor disappointing, it’s also impossible to say that it’s as good as Supergiant Games’ previous title. If the game had taken more time to explain its story, characters, and world, it probably would have been a more enjoyable experience. Luckily, the design of the combat system is a huge step up from Bastion‘s comparatively simple hack’n’slash battles, and the game’s Recursion Mode — basically a new game plus — is designed in such a way that multiple playthroughs are required in order to see all the various functions and even to unlock all of the game’s upgrade slots. A single playthrough will likely take most players roughly eight hours. It might not have matched up to their last game, but Transistor is still a great title that leaves me excited to see what the studio has planned next. 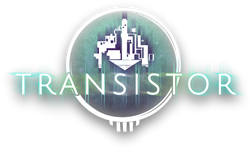