Nihon Falcom’s success of the past few years has been driven by two main series: the fast-paced, exploration-focused Ys and the turn-based, plot-heavy The Legend of Heroes. Looking to try out something new, but not too new, the company created a title in the form of Tokyo Xanadu that looks to combine various elements of those two series, with an urban fantasy setting greatly reminiscent of the Persona series. In addition to its original Vita release, localised by Aksys Games in early 2017, the developer also produced an enhanced version Tokyo Xanadu eX+ for PlayStation 4 that arrived in the west just before the new year. The game provides lots of entertainment, complete with the charm and strong characters that Falcom games have come to be known for, though the extra content might not be as substantial as owners of the (previously-reviewed) Vita release considering a second purchase would like.

Tokyo Xanadu eX+ takes place in Morimiya City, a fictional suburb of Tokyo. Ten years prior, the city was shaken by a devastating earthquake that was caused by an entity from a mysterious other world called the Eclipse, which is home to hostile beings called Greed. Main protagonist Kou Tokisaka becomes embroiled in events surrounding the Eclipse, when he attempts to come to aid of classmate Asuka Hiiragi and discovers his ability to both see and manifest a special weapon within the Eclipse, as well as her secret role in an organisation investigating it. With the Eclipse usually taking the form of dungeons with an especially powerful Greed at the end, and having a penchant of snatching up people through the gates it manifests in, Kou and his expanding group of allies look to investigate and prevent disaster as it encroaches on the real world or others try to use it for their own goals.

The game is divided into a chapter structure lifted almost wholesale, along with some minigames and the passive ability system, from The Legend of Heroes: Trails of Cold Steel. There is a bit of a greater focus on being more episodic content, further embedded by an opening movie that appears near the start of each of them. Chapters generally start with introductory event scenes before Kou receives some free time, where he can wander the city, talk with the many deep NPCs living there, undertake quests, and increase his affinity with allies through events. Aiding with these are Xiphones and a social media program called NiAR that take the role of quest logs and providing an always-expanding glossary as players interact with characters, reads books, etc. Thanks to their manufacturer’s connection to the Eclipse-related organisations, the Xiphones are also the primary method of summoning weapons used in the Eclipse, though for those with the nebulous potential to do so. 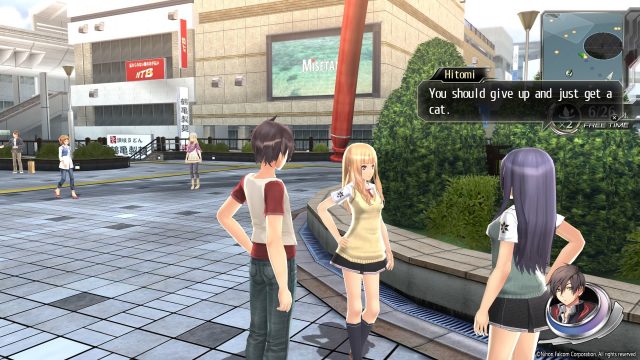 Each chapter tells a fairly self-contained story — usually focused on an upcoming party member — but also helps to build up the overall narrative, and this structure works nicely from a pacing standpoint. However, chapters can start out a bit plodding, as there is an awful lot of talking between leaps into the Eclipse, especially if players want to do all the quests and fill out their Xiphone. The large questions left at the end regarding the nature of the Eclipse may also disappoint some, but Tokyo Xanadu eX+ succeeds at providing an engaging story. The game provides a strong cast, with the wider city and its inhabitants ably assisting in building a highly charming setting. Heartwarming moments are present in abundance, and Kou himself is a great protagonist throughout.

The primary additions to the eX+ version are the side chapters at the end of each original chapter and a post-epilogue After Story. These don’t add anything especially substantial by themselves, offering some character-related event scenes and a bonus dungeon with the characters involved in the scenes, though it does provide some hints for the special After Story chapter set some months after the main game. The extra content probably won’t be enough to justify another full purchase for those who have played the original, but it is a welcome addition, further adding to the charm of the game and affording the characters more fun interactions.

Combat doesn’t quite reach the stratospheric bar set by the most recent Ys games, but it is nonetheless highly enjoyable. Players take a party of up to three into each dungeon. Only one character is active, but the others can be switched in immediately with a single button press. Changing characters is a key part of combat, with each character having their own attack element and virtually every enemy having an elemental weakness. The active character has a pretty standard selection of controls: dodge, jump, standard attack, charged attack, ranged attack, and aerial attack. On top of these there are three special attacks or bursts that can be easily activated.

Some enemies can hit hard if players aren’t paying enough attention, but in general the game is quite forgiving. Players can freely adjust the difficulty so if things are becoming too tough or lack enough challenge on the Normal difficulty it can be bumped up or down. There is usually enough telegraphing of incoming attacks by enemies so that players can time a parry-esque dodge, or simply run out of the way completely, and the various special attack options hit very hard and are especially useful for getting out of tough situations. All the different enemies are appreciably different in how they attack, particularly bosses, so players do have to take note of what enemies are likely to do. 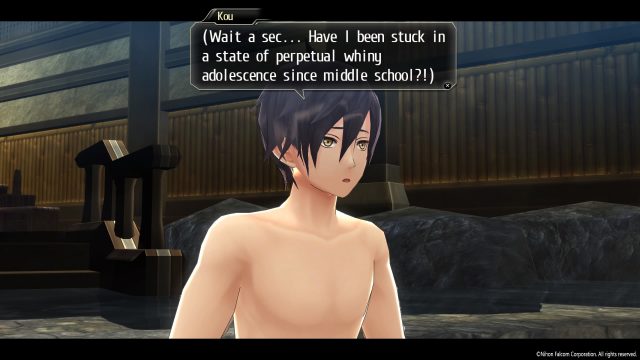 At least he figured it out on his own accord.

Dungeons themselves are nicely sized to provide good bursts of action without becoming a drag, while the ranking system and various chests encourage players to investigate all the nooks and crannies but to not spend too long doing so. Character progression is pretty standard, with accessories and gems used to provide the most customisation. Instead, variation is provided through the significantly different ways party members control, and with the game’s direction geared at frequently swapping between them, this helps keep the combat feeling fresh throughout. In the end everything combines nicely to make for engaging and entertaining gameplay that never overstays its welcome.

As per usual for the developer, the soundtrack is provided by the Falcom’s JDK Sound Team, and maintains the very high standards that have come to be expected of it. The upbeat themes used around Morimiya City are a pleasure to listen to. Voice acting is Japanese only, and like other Falcom titles is a bit more sparingly used for more innocuous scenes, but does a good job with all the important events and the in-game chatter. The upgrade from the PlayStation Vita to PlayStation 4 works nicely, with the game looking good and running excellently throughout. Character models aren’t as incredibly detailed as they might be in other games on the console, but the designs and locations are pleasing to behold and are nice and crisp.

For those planning to pick up one of the versions of Tokyo Xanadu, eX+ would be the recommended one for the extra event scenes and character interactions that come with it. Its improvements — including an assortment of minor quality of life upgrades — mean that it is the better release, but those who prefer to play on handheld shouldn’t feel at all shortchanged by the original; the extras are more a bonus than anything and players are getting a substantial and greatly absorbing experience either way. Nihon Falcom’s charm permeates throughout and its incredibly easy to get attached to Morimiya City and its residents.