The Dungeon of Naheulbeuk: The Amulet of Chaos Review

It is extremely common for games that are set in fantasy worlds to have a solemn tone that includes a party of heroes trying to save the world (or at least part of it) from imminent danger. The Dungeon of Naheulbeuk: The Amulet of Chaos challenges that standard, combining a medieval setting with a comedic twist and unpredictable characters who question the roots of fantastic stories. With both a humorous script and great voice acting, The Dungeon of Naheulbeuk offers hours of fun for those who want to dive into quests, challenging strategic battles, and a twisted sense of humour.

As the name suggests, the story takes place in a dungeon called Naheulbeuk, with seven characters unable to exit and very little in common to bond them together. These misfits — The Ranger, The Wizardess, The Ogre, The Barbarian, The Dwarf, The Elf, and The Thief — must join to explore the dungeon, lift the amulet’s curse, and meet a colourful array of dungeon denizens along the way. 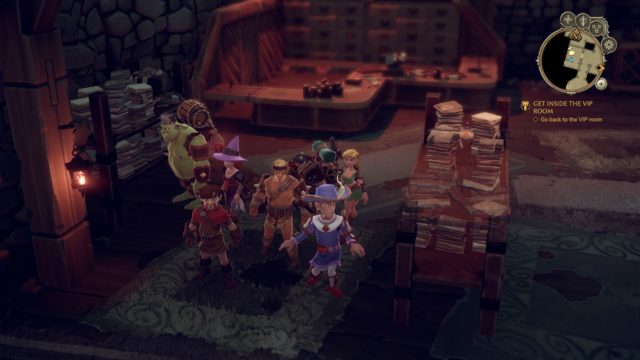 Unlikely heroes need to join forces with strangers to lift the curse.

The parody of classes, strange creatures, dungeon masters, and exotic worlds never stops thanks to the comic script and constant remarks. Party members have no names, instead being referred to as their class or race, and each has clear personality traits that affect their story choices, mostly in hilariously bad ways. Characters question the journey that controls their fates and the quests that they have to complete, suffering the adventure most of the time and teasing each other constantly. Even when every stereotype is exaggerated and ridiculed, the story makes sense and it takes the player from one place to another in an enjoyable trip.

Aside from the satirical elements, exploration and battles are the core of the game. The inglorious band of heroes must deal with hidden traps, locked doors, treasure chests, merchants, and assorted characters begging for their assistance. There are also puzzles and riddles that need to be solved in order to advance or access chests with helpful pieces of equipment. The exploration elements don’t add anything not seen before but are engaging enough to hold interest. Outside of the main storyline, the party can also complete side errands, which involve routine trips to toilets. The game allows players to be good or evil due to its many choices, which include taking sides in dilemmatic situations and deciding whether to act selfishly and retain the loot or keep their word and earn experience. Additionally, an eighth member can join the party, which means splitting experience and gold with another weirdo, but they make up for it by being incredibly useful in battle as well as offering a couple of quests and additional funny remarks.

Combat is a turn-based experience most Dungeons & Dragons players will find familiar: each character can move and take an action each turn, which includes basic attacks, special abilities, and defending. While agility defines the number of squares each ally or foe can move, the other stats and the position of each fighter define how effective actions are. Some commands can be used each turn, but special techniques need to cool down before they can be used again, so timing is crucial. Luck plays a key role, as both critical successes and failures can drastically alter outcomes, making battles extremely interesting and avoiding repetitive results. Although a faster pace in the enemy actions would make the battles smoother, they’re definitely fun and can become highly challenging at higher difficulty settings. 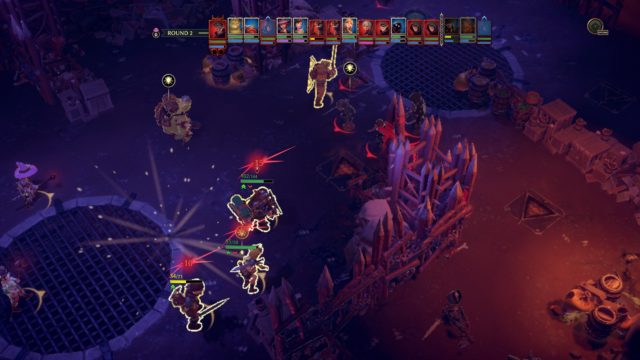 Just as in traditional Dungeon & Dragons games, each character has a personal sheet with stats that can be augmented and a unique set of abilities that can be unlocked when they level up by completing quests or defeating enemies. The Ogre is assigned the duty of carrying the party’s loot, but space is limited, so players will need to consider carefully what to keep, sell, or throw away regularly. To be consistent with the laughable approach, most weapons and armor have silly names, and books include funny alternate stories about the creation of many fantasy-story staples.

The sound design is where The Dungeon of Naheulbeuk shines the brightest. An immersive medieval soundtrack contrasts with the game’s silly sound effects; the voice acting is top-notch and includes memorable performances by Felicia Day, John Lang, and others. Additionally, players can choose between a male or a female voice for the narrator, who maintains a sarcastic and funny running commentary. The irreverent humour also continues through the game’s visual design, where deformed chickens and dirty toilets are a staple of the ridiculously designed dungeon, and RPG cliches are regularly mocked.

The Dungeon of Naheulbeuk: The Amulet of Chaos has no fear of pointing out the absurdity within conventional fantastic stories while offering an enjoyable game with many possibilities that can invite players to have more than one playthrough. The battles and puzzles both offer a fun challenge, and the dungeon has plenty of rooms to explore. For those who enjoy constant satire, subverting expectations, and enchanting voice acting, there’s no better place to stop and use the toilet.