Dungeons and a Couple of Dragons

The Lost Angelic Chronicles of Frane: Dragons’ Odyssey is a mixed bag, in addition to having one of the world’s longest game titles. Originally created in Japan, Exe-Create brought the 2D action RPG to the West complete with English voice-acting and a brand new soundtrack. The fast-paced battle system and well designed dungeons make for good periods of enjoyability, but the mediocre story impress, plus balance and control issues show up to smother the enjoyment with frustration.

Dragons’ Odyssey takes place on the world of Kalenthia, lying below the realm of Venneth, inhabited by God and the protagonists. After their angel friend Escude disobeys God and leaves for Kalenthia, the dragons Kunah and Riel are tasked with retrieving her. Their search for Escude begins after managing to construct a fully furnished house before nightfall. An early conversation indicates tension between the angels and a supposed clan of demons, but this seems to have no impact on the story other than supplying the presumed reason Escude must be found. Kunah and Riel’s status as dragons is also underplayed, as they remain exclusively in human form except at the beginning and end.

Fortunately the battle system is much snappier than the game’s title. Effectively it can be split into two almost wholly distinct versions, one used for the normal dungeon crawling battles against numerous respawning enemies, and another for boss battles where many of the assisting features are removed. Unfortunately, the game contains no documentation, instructions, or tutorials so players are left to figure out all the button presses and battle mechanics themselves. Dragons’ Odyssey provides gamepad support and easily works best when one is used. The game can be played on keyboard or mouse, but both have issues that make controls awkward, particularly in the boss battles that happily punish the slightest mistake.

Players take full control of Kunah, with Riel automatically following close behind. The pair operates in a complementary fashion, with Kunah physically attacking at close range and Riel firing magical projectiles. The button for Kunah’s physical attack also allows Riel to lock onto enemies, even if out of Kunah’s range. This thankfully eliminates the need to manually target projectiles. Kunah and Riel both have meters that fill up as enemies are defeated and allow them to use a special attack when maxed, easily wiping out any opponents in range. Kunah’s can be activated at will by the player, although Riel’s appears to activate automatically if Kunah finds himself surrounded by enemies. The battle system is very much a button masher, with large numbers of enemies appearing during normal dungeon exploration. 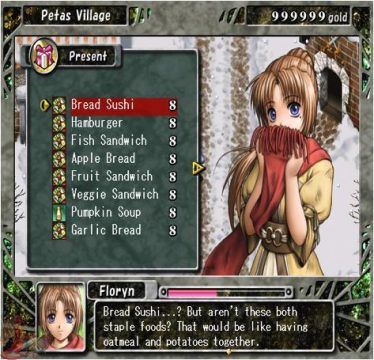 Some flavours work well together. Others perhaps not.

Attacks come in two elements, fire or ice, depending on which weapon or spell Kunah and Riel have equipped. Enemies usually are aligned with one of these elements, and with occasional exceptions such as bosses, using the opposite type of attack is the only way to deal good damage. This does mean that players will have to switch equipment fairly often, but usually each section requires only a single element, meaning that at least the need to switch mid-battle is very rare. Overall the battle system remains enjoyable to use while going through the game’s dungeons, helped greatly by some excellently designed locations.

However, in order to make Dragons’ Odyssey’s boss battles more challenging a number of the assists are removed, including deactivating the pause menu. This makes the boss battles stand out, but has the added effect of making them punishingly difficult at times, with even the slightest error ending in death. Without Kunah’s auto-targeting, Riel becomes incredibly awkward to use as an attacker. She does learn homing spells of her own accord, but these are learnt well after the first couple of bosses have already caused incredible annoyance. The final boss changes things even further, becoming effectively a straight-out shmup. The difference in difficulty between these battles and the standard dungeon crawling is staggering, and while on Easy difficulty Kunah’s special attack does effectively become an instant win button allowing players to at least progress the story, there is no such luck on higher difficulties. Fortunately, being defeated simply returns players to the previous screen rather than giving a game over, but the perfection required to beat each boss is jarring and without much justification.

The story does the job of giving players a reason to go to the next dungeon, but outside of that it’s somewhat unimpressive. Humour is inserted frequently, and while it is rather hit-and-miss, it does make the game much more accessible and takes some pressure off the central narrative. There are a number of plot holes and scenes that seem to come from nowhere, so the humour’s role in encouraging players to just go along with things is very welcome. Characters aren’t particularly memorable, and although there are attempts made to develop them, it often occurs all too quickly without any real setup. The world is also rather underdeveloped and results in a good percentage of events appearing to occur randomly and without proper cause.

Dragons’ Odyssey contains a number of sidequests, including a casino and a simple crafting and cooking system. Food or materials can be bought in shops and combined into gifts for NPCs that can raise or lower their affection for Kunah. NPCs can also be talked to, although frustratingly the talking is automatic and appears to have a chance of lowering affection instead of solely raising it. Gifts and talking both seem to have a fairly small individual effect, so players should expect a fair amount of repetition if they wish to max out affection. The game can be completed within ten hours, assuming players can defeat the bosses, although restarting the game at a higher difficulty should provide some replayability. 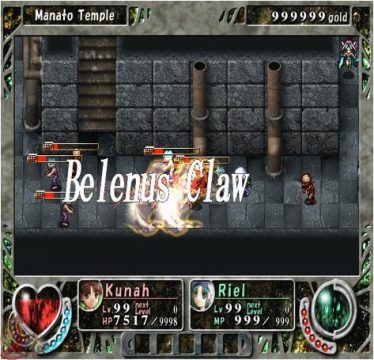 The game’s sprites and artwork look very nice, with locations appropriately varied and well designed. Although the world map is fairly dull and only draws attention to how underdeveloped the world is. There are also a few areas where Dragons’ Odyssey doesn’t make it clear that something is subject to interaction instead of just wallpaper, and the old developer’s cheap trick of hiding occasional items in area the perspective makes invisible is employed. The game features a 3D-animated cinematic for both the opening and ending of the game, which doesn’t add too much, but is a welcome touch.

Voice acting appears throughout and, like the rest of the game, it too is variable. A fair number of lines don’t sound natural, and over-exaggeration often afflicts the performances free of oddly times pauses and emphasis. There are still a decent number of good performances, notably Kunah, and this inclusion is certainly preferable to silent text. The localization also provides a brand new soundtrack by Jordan Steven, which is an excellent listen that brings some much-needed life to locations and is definitely one of the game’s highlights.

Dragons’ Obyssey is a decent enough time-waster, and those looking for some fast-paced dungeon exploration and boss battles that ramp up the challenge should find enough to keep themselves entertained for a good while. On the other hand, the story, while having a few moments, is a disappointment and the lack of even a screen explaining the controls is an oversight at best. There is certainly replayability in the game, and enough sidequests to break up the pace if necessary, but overall the game doesn’t quite manage to stand out in the way RPGamers may hope.