The Legend of Heroes: Trails in the Sky the 3rd Review

It’s been a long time coming, but with the release of The Legend of Heroes: Trails in the Sky the 3rd, XSEED Games has accomplished something that many people believed would never happen. Despite the final entry being a decade old as of this July, the entire Trails in the Sky trilogy has finally been released in English. So was it worth the wait? Well, yes and no. Trails in the Sky the 3rd is a fun, surprisingly challenging RPG that gives players a welcome final journey with the characters they’ve grown to love over the previous two games. At the same time, in many ways it feels like more of an afterthought: a bridge between the now-completed story of Estelle and Joshua Bright and the future entries of the Trails series. This in no way makes it a bad game, but it’s likely not what you’re expecting.

Trails in the Sky the 3rd breaks away from the previous games by placing players in the shoes of Kevin Graham, a priest of the Septian Church and a member of the Gralsritter, a special organization within the church dedicated to hunting down artifacts from a long lost civilization. Those familiar with the previous games may recall the group appearing within the in-game novella Carnelia, and in fact this novella ties into the events of 3rd in many important ways. During one of his missions, Kevin and his squire/childhood friend Ries find themselves trapped within a strange otherworld, taunted by a masked figure who calls himself the Lord of Phantasma. Together with friends old and new who have become trapped alongside them, they have to unravel the mysteries of this world and find a way to escape. 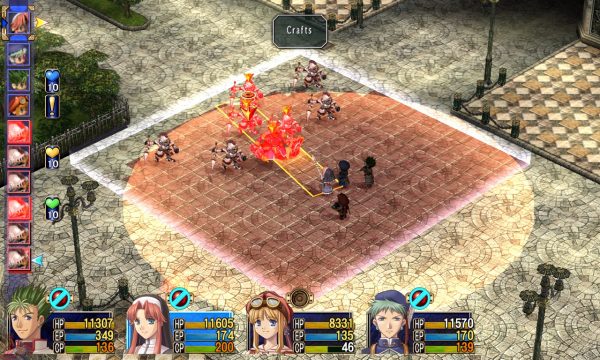 The Trails in the Sky combat system is at its best in 3rd.

While the story of 3rd is tied directly to the events of the prior Trails in the Sky games, the entire structure of the game is radically different. Rather than exploring the Kingdom of Liberl and completing quests for the people there in traditional RPG fashion, 3rd takes place entirely within the confines of the aforementioned otherworld, and is structured entirely as a dungeon-crawler. The world is divided into seven planes which Kevin must traverse, defeating bosses and saving trapped comrades along the way. There are no towns or sidequests during the main adventure, just a straight route towards the end. Thankfully, the level design is quite good and includes a number of twists and turns, with lots of treasure to be hunted down.

If this sounds somewhat monotonous, the game breaks it up with the inclusion of mysterious doors that can only be opened once certain conditions have been met, usually by having the correct characters in the party. Each of these doors contains a short side story about the various characters throughout the Trails in the Sky series. Some of them serve as a “where are they now” style epilogue to the events of Second Chapter, while others provide additional backstory to the series as a whole. A few of them are little more than mini-games, while others introduce characters fans of Trails of Cold Steel will immediately recognize. All of the doors are structured a little differently, for better or worse. A few are nothing but non-interactive short stories that go on far too long for their own good, but others are brilliantly designed and even include their own dungeons and battles. Most of the game’s best moments come from the doors, but the main story has its moments as well, particularly in its final chapters.

The combat system of 3rd is, by now, readily familiar to Trails in the Sky fans, but it’s at its most intense in this latest entry. Players begin the game already at level 90, and the battles are all designed to make full use of the combat system’s features. Battles take place on a tactics-like grid, and each turn characters can move around and launch attacks on the enemy. Normal attacks and special crafts can be used immediately, while arts — the Trails universe’s version of spells — take some time to cast before being launched, during which the caster is vulnerable to being interrupted — or, as is often the case in 3rd, flat-out killed. Many of the battles throw some shockingly challenging obstacles at players, including enemies that reflect arts or physical attacks, status ailments, powerful area attacks that need to be dodged, and more. The game’s final boss fight is impressively intense, and this is saying something in a game crammed with fantastic boss fights. 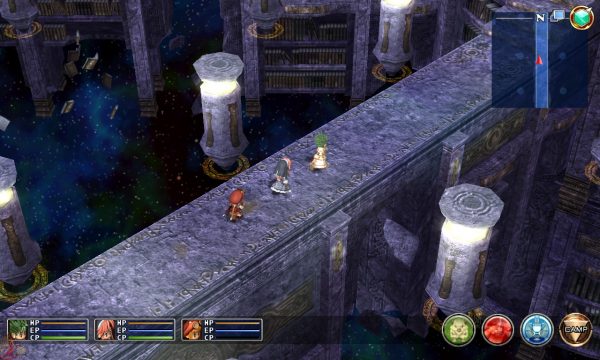 Any world that includes a giant space library is bound to be really weird.

The Trails in the Sky orbment customization system also returns, allowing players to collect and equip a wide variety of quartz, unlocking powerful passive bonuses along with new arts to use in battle. Most of these will be readily familiar to fans of the previous games, but there are several new ones that make an appearance as well. Each character can also use a variety of equipment, and with a huge cast of sixteen characters to outfit, players will need everything they can get their hands on.

For a ten-year-old game, 3rd also looks pretty decent, though it doesn’t improve any from the previous two Trails in the Sky games. The sprites are terrific, particularly when animated, and the lighting engine remains one of the most detailed around in a sprite-based game, with characters casting shadows of varying lengths and even multiple shadows depending on the location of light sources. The game still suffers from a number of technical issues, including random drops in frame rate and a few bugs that haven’t been squashed yet. With that in mind, XSEED Games has been impressively diligent about patching and repatching the game since launch as it finds and fixes these issues, so it’s difficult to say if this complaint will remain relevant even a few weeks down the road. The music, of course, is terrific, but largely recycled from the past two Trails in the Sky games. Thankfully, these pieces were already fantastic to begin with, and easily mesh with 3rd‘s new tracks.

Trails in the Sky the 3rd is bound to be a very divisive game among Trails fans. Its radically different structure is such a departure from the prior games that it’s inevitably going to turn off some players, but at the same time, the fantastic boss battles and charming moments still manage to keep you hooked through what would, in any other circumstance, be a rather monotonous dungeon crawler. Had it not been for the two prior games of history, I doubt it would be able to hold up as well as it does; indeed, if you haven’t played the previous titles, Trails in the Sky the 3rd would be a confusing mess. If, however, like so many Trails fans, you’ve fallen in love with the cast and want one last adventure with them, Trails in the Sky the 3rd does an admirable job of providing just that. 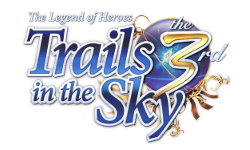