Happy Trails, Until We Meet Again

I imagine only those closely following the Japanese RPG scene knew what Eiyuu Densetsu: Sora no Kiseki was before it was announced for localization. Those who did know of this title praised it for its great cast of characters and wonderful story. Being such a story-centric game is also one of the biggest reasons that it took so long for it to make it to North America, as the sheer volume of dialogue to translate and edit was too much for most publishers to want to tackle. However XSEED Games took up the cause to release this massive RPG, now titled The Legend of Heroes: Trails in the Sky, nearly five years after it first hit the PlayStation Portable in Japan.

Trails in the Sky has the unfortunate problem of dealing with the stigma of the three prior, horribly localized, Legend of Heroes games for PSP. Thankfully, it is a completely different product developed in-house by Falcom unlike those other lesser titles. This game is the first of a brand new trilogy, and it will leave fans satisfied, but longing for more.

Some RPGamers may bemoan the lack of quality RPG storytelling, but they need only to look to Trails in the Sky to see a great example of how it still can shine. The game follows the tale of Estelle Bright and her mysterious adopted brother Joshua. The pair travel around the nation of Liberl as part of their training to become full members of the Bracer Guild, the country’s non-militaristic peacekeeping force. During their travels, the duo encounters a wonderful cast of villains and heroes alike, though it’s not always clear who’s good and who’s bad. The highlight of the story is the characters and their interactions. Be it the hilarious dialogue of the ever flirtatious Olivier or the naive persona of Estelle, the characters are the key to this game’s success as they weave perfectly into storytelling and character development.

I don’t always hit on the ladies…but when I do, it’s my adopted sister.

While the game is steeped in fantasy, it has a modern feel to it and the characters all seem to have solid and believable motivations for their actions. The cast seems honest, with each character playing their part for a reason, not just because the world needs to be saved or the bad guy needs to be defeated. There are no throwaway characters here. This connection is the heart of Trails in the Sky and what makes this story one of the most endearing in recent memory. While it does take a few hours for the plot to really get rolling, once is does it is tough to put the game down. In a time where there are loads of RPG stories that are either realistically gritty or way over the top, it’s nice to see a down-to-earth plot with a relatable cast that will have you caring about what happens to them. Trails is fairly linear, but does offer many optional side quests and lots of NPCs to interact with. The localization is fantastic, especially considering the vast amount of text. And while it does end with a clear lead-in to the second game, it does not feel like an unfinished cliffhanger. It will absolutely leave fans with a strong desire for the next game, though.

Story is clearly the main focus of Trails in the Sky, but that doesn’t mean that everything else takes a backseat. Much like the story, the game’s battle system might start off slow, but it builds as the game progresses into something very enjoyable. After enemies have been encountered on the overworld map, it transitions into a turn-based combat system on a gridlined field. Characters have standard melee attacks, magic spells called arts, and special moves known as crafts. Basic melee attacks vary by character. For example, Joshua has a sword with a small range and Scherazard has a mid-ranged whip. Arts are equivalent of magic, and each character can be customized with elemental Quartz that enhance skills and combine to create spells. The creation formulas of these arts are not transparent, but there is a handy notebook available at any time in-game to see what is required to make every spell.

Crafts are available in two types: normal and S-Crafts. Each use craft points (CP) which build up as characters deal or receive damage. Normal crafts vary by character, with some being more attack-focused and others taking more of a support role. These are gained periodically as characters level up. S-Crafts are extremely powerful special abilities that require CP be over 100, increasing in strength all the way up to the max of 200. For some characters these are powerful attacks that hit all enemies, while for others it might be a life-saving, heal-all spell. Another benefit to S-Crafts is that they can be used at any time to jump a character to the top of the turn order. This helps add yet another layer of strategy to the battle system. 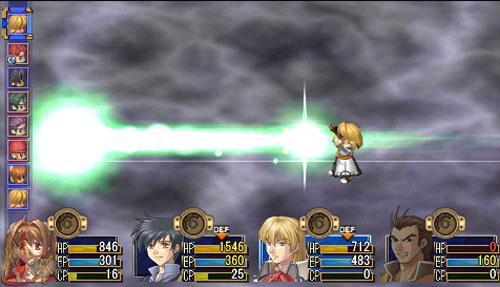 Olivier firing his weapon all over the place.

Variety is a big plus in Trails in the Sky. For most of the game, party members are placed with Estelle and Joshua based on what’s going on with story. Each character offers a unique style and help to shift the party dynamic, yet the game never handicaps the player. The battle system offers a nice challenge throughout, though it is never too difficult. Early on, some of the battles can be tough since the characters are lacking in combat options, but that ramps up nicely as well. If players ever do run up on a battle that is either too difficult or that they are unprepared for, the battle can simply be retried at a lower difficulty if the player dies. So not only are losses easily worked around, but players can also save anywhere, making things even more convenient. The game is very well-balanced, even if it takes a couple hours to get there.

The one downside to the game taking so long to come out in North America is that the visual presentation is nowhere near up to par with current PSP titles. That’s not to say that it looks bad, but the quality difference is clearly noticeable. That said, the character art, environments, and sprite animations are all at least well-done. Now, while the visuals might not be up to par with newer titles, the soundtrack is just the opposite. This fantastic collection of music is fitting, memorable, and emotionally evocative. The battle themes are catchy and the other pieces mesh perfectly with their scenes. So even if the visuals are dated, the soundtrack is timeless.

The Legend of Heroes: Trails in the Sky almost missed out on ever seeing a North American release, and that would have been a true shame. Trails is a fantastic game that takes a little time to warm up to, but once it does it will likely set you on fire. With a great story, fantastic characters, humorous dialogue, a fun battle system, and a wonderful soundtrack, it towers over better looking games in terms of content. Trails focuses on telling an interesting story with loveable characters, but it doesn’t forsake gameplay to do so. The only painful part about Trails in the Sky is the agonizing wait for the second game. 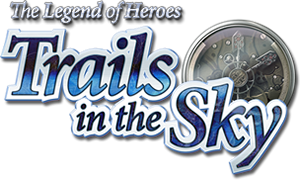