Sometimes a game can look simple at first glance, but after taking a deep look there’s plenty to interact with. Tainted Grail: Conquest by Awaken Realms is one such game.  On the surface, there is an engaging and fun roguelike deckbuilder with multiple character class options and a simple story.  Playing the game multiple times reveals that there are layers to everything that add to a motif of slow realization and discovery.  This is not a game in which the full grasp of the story or gameplay can be understood in a single playthrough.  It is rare to see a game weave the story they are trying to convey into the mechanics of the game so capably.

In Tainted Grail: Conquest, the protagonist is a person living in a small village on the isle of Avalon.  Avalon is rife with constant war, and filled with people too greedy or selfish for their own good.  One day the protagonist wakes up and encounters a mysterious goat person in their empty village.  This goat tells them that everyone they knew is gone but there are survivors in this dreary world if they choose to go look for them.  Leaving town has the player enter the Wyrdness, a living magical fog that plays on a person’s insecurities.  Staying in the Wyrdness for too long has driven many people mad, physically altering them based on their experiences.  Avalon features stories steeped in Arthurian legend and references to them are made throughout the game.  However, this is a story that looks intimately at regular folk and what makes them tick.  Stories for these NPCs involve multiple parts and talking to various individuals to gain the full story, and cannot be completed in a single playthrough.  These side-stories are all worthwhile and interesting variations on self-doubt, self-loathing, or otherwise falling prey to poor decisions. 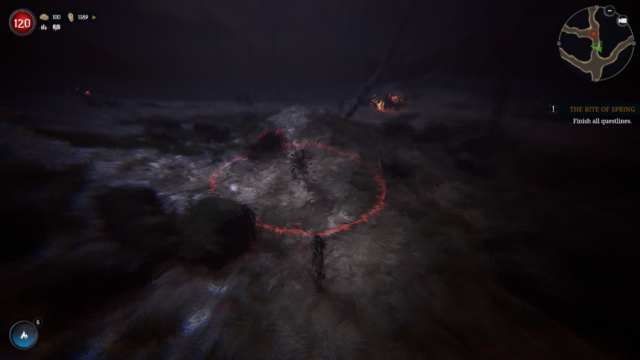 Avalon is definitely out of focus without the light of a Wyrdcandle to show the way.

The village is the main hub for each foray into the Wyrdness.  There are four gates in the village, which open one at a time, each leading to a new zone.  Zones look the same with an eerie landscape and increasingly strong enemies to face to reach the next area.  This landscape alters from being easy to see, to a blurry mess depending on the Wyrdness’ brightness levels.  Wyrdcandles hold the Wyrdness at bay and makes traversing easier, but burn out quickly.  After leaving to explore, the way to town is gated, forcing the player to survive the Wyrdness.  In each zone there are roughly a dozen fights the player can choose to undertake with the first few serving as introductory fights to the area.  Each also features a tough fight against a treasure guardian that acts as a mini-boss as well as the final legendary encounter that blocks the way back to town.  The remaining fights are split equally between odd locations such as bloody altars or taverns full of ghosts and lone NPCs traversing the Wyrdness.  The only area that does not follow this structure is the final area, with only a simple path straight to the boss.  NPCs can function as any variation of merchant or just give treasure to the player.  Sidequests can appear or continue at any location or play out when the Wyrdcandles fully burn out.  This entices the player to defeat every enemy to find out what they are guarding, though the quest menu provides a hint to where to look next to continue a found story thread.  The correlation between each of the denizens of the Wyrdness is the source for the biggest flaw in the game as NPCs and locations only appear once per playthrough at most, making progress on some story threads locked behind random chance.

At the start of each playthrough, the player chooses a class for their avatar.  Combat styles can be broken down into melee, ranged, or magic types, which are splintered into three classes apiece.  Combat begins with the player having three energy points and a deck of cards to draw from to attack or apply buffs and debuffs.  Ranged classes have access to quivers that use charges from their ultimate ability to draw more attack cards, while magic classes’ attack cards are replaced by minions that are summoned to attack, defend, or buff.  Every type has its own set of cards they start off with.  Each class has an ultimate ability, a once-per-round special skill that needs charges to be used, which can be gained by following a specific style of play.  For example, the Berserker and Pathfinder are both melee. but one gains ultimate charges from taking hits while the other gets them through using buff and debuff cards to avoid them.  This makes cards that are less useful for one class very effective for another.  The game features a good balance to make sure the enemies are tough but fair each step of the way.  Enemies have an intent icon overhead to show what they are planning to do and if it is an attack how damaging it will be.  This makes planning for each turn efficient and playing methodically often leads to outsmarting the random chance and usually prevents disaster. 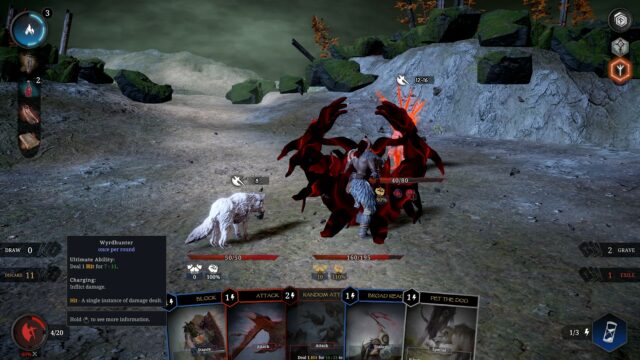 The Wyrdhunter’s ultimate ability in action.

Cards are added to a deck through levelling up, with players choosing one card from a selection of three.  There is also the option to take no cards, but this is not advisable at the start as crafting a deck that fits with the class is something that takes more than the default cards.  At every even-numbered level the player also gets to choose one of three passive skills that will benefit the class and further specialize it within their own field.  At levels ten and twenty, instead of a regular passive, the player obtains a mastery that amplifies a class’ power or alters a weakness to a strength.  All these systems look daunting at first glance, but gaining a grasp on how to construct decks is easier than it looks and is a ton of fun.  Deckbuilding does not end there as legendary and neutral cards are huge game changers that any class can use and can be found or purchased.  Tainted Force cards based on Wyrdness levels also occasionally pop into a player’s hand and do different things depending on whether or not they are used or not during the turn they’re drawn.  These cards are more likely to be beneficial if Wyrdcandle brightness is high, but can still force a player to play cards strategically to avoid taking annoying debuffs.  Consumable combat items are joined by runestones that can be slotted into weapon or armour slots to further add to the customization options.

If the player is defeated, they do not have to worry, as any quest progress carries over.  When each run ends, there is also a score that is tallied by the game that leads to additional classes and cards.  Currency specific to each village member also carries over.  As the village grows members can improve runestone drops, consumables, base stats for the player, and Wyrdcandle effectiveness.  Certain facilities use their own resources, with one of the simpler examples being tallow gained from burning Wyrdcandles, which is used to improve them.  Wealth, the currency used for purchases, does not carry over, yet one of the villagers even uses this to upgrade consumables.  This system ensures that even if a bout of even if a bout of bad luck happens there’s still some progress towards taking on the challenges the game has to offer. 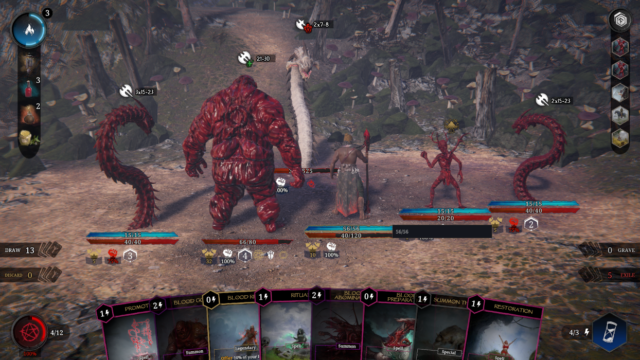 Tainted Grail: Conquest gives players a dreary landscape to move around in.  Wyrdness creates a fog-of-war as brightness levels dim, giving a sense of dread that continues to increase as the light decreases until only blurry shapes are visible if wyrdcandles burn out, which is a cool visual.  While the environments aren’t the most exciting, where the game excels visually is in the designs of some of the enemies and NPCs.  An example of this is the NPC Elderly Archer, a man that has fused to the bonfire he sits in front of through vine-like veins.  Enemies feel straight out of a horror movie, including infected humans that are bloated mutations featuring jagged mouths for shoulders.  Adding to these visuals is some superb voice acting, with every character getting a capable voice that is punctuated by dictation from a smooth female narrator that would feel at home in a creepy audio novel.  Joining this is a soundtrack with driving moments to push the player forwards.  Particular mention goes to the boss theme, which is an amped-up and energetic Gregorian chant featuring an addictive beat that makes every boss fight feel special.

There’s a lot of things in Tainted Grail: Conquest that show the developers knew what they were doing.  It is rare to see a game so fully embrace the type of game it wants to be, as the roguelite nature symbolizes the growth of the protagonist to fully understand their surroundings.  The game has a forgiving nature as it does not punish players for dying too often and in turn makes it accessible to pick up and play.  All the tinkering options with classes and deckbuilding make it daunting at first glance, but after getting the hang of it, each playthrough feels unique even when using the same class.  The realm of Arthurian legend has never quite been explored this way before, and seeing the psychological wear and tear on the denizens of this trapped world is addicting.  Get ready to dive into the Wyrdness, just make sure to have enough Wyrdcandle ready to light the way.