The Sword Art Online games have a curious history; the titles have never exuded much quality — particularly in the localisation department — but have successfully skated by on the franchise’s massive popularity to ensure good sales numbers. Though the latest title could have marked an improvement in quality, being in the hands of a new developer, complete with a switch to a heavy focus on third-person shooter mechanics and an upgrade in production values including a more competent localisation, Sword Art Online: Fatal Bullet sadly still suffers many of the same issues as its predecessors. A complete failure to make the setting interesting, insipid progression, and mediocre gameplay make for a thoroughly underwhelming experience, with the primary appeal being to fans of the franchise who simply want to see the characters extol the unshown virtues of fictional VRMMORPGs.

Fatal Bullet‘s premise marks a couple of major changes for the series, with players inhabiting a new fictional VRMMORPG called Gun Gale Online and taking control of a new customisable character. While refreshing on the face of it, the actual upside of doing so is debatable. If the story and setting had provided some engagement then this would have been a worthwhile endeavour, but the story is milquetoast at its finest, the customisable character is just a generic blob, and Kirito and his bevy of female admirers still take up huge chunks of screen time.

Gun Gale Online itself appears to have no plot, and everything is driven by an incredibly rare ArFA-sys AI that the player character manages to stumble upon in his or her first foray into the game. For reasons never adequately provided, parts of the AI have been scattered across the world and need to be collected for a new dungeon to open up. There is no logic behind any of the progress requirements in the game; players either go somewhere because the map tells them to, or because another character has come up and said that something can be found there.

The story has some small things going for it. The AI character manages to be entertaining in spurts, and there are some heartwarming interactions between the characters. However, the game goes overboard trying to be as heartwarming as possible for the vast majority of the game — often in what appear to be attempts to service franchise fans — with the result being that the rare somewhat successful moments are massively diluted by the rest of the waffle. Players have occasional response prompts in conversations but applying the term choice is almost laughable, as they affect nothing and more often than not amount to two slightly different ways of saying the same thing. 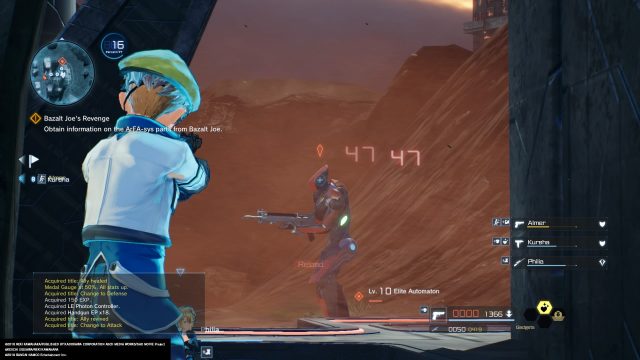 Get ready to shoot many robots.

Immediately after the game reaches an initial conclusion, Fatal Bullet becomes enamoured by the mainline series’ Death Gun arc. This is followed by the option to once more control Kirito and play out an incredibly abridged version of the arc where players again appear to get killed after dying in-game. Completing Kirito’s brief mode is optional, however, doing so is one of the ill-conceived true ending requirements, albeit by far the least offensive of them. The biggest problem lies in the other side of those requirements, which have no logical narrative basis and force players to spend many hours simply abusing a loophole in the superficial affinity system — in order to raise it sufficiently on every character — if they just want to do it the “quick” way. When this actual narrative is finally interjected, as the game decides to suddenly switch from puppies-and-rainbows fun times to some fairly preposterous life-or-death drama, the clunky way it is handled fails to mount any sense of believability in what is going on.

Fatal Bullet still attempts a token facsimile of having players inhabit an MMO, but it seems to have abandoned attempts to make that MMO appear remotely popular during regular play. There are much fewer players wandering around the main hub area, and very few, if any, to be found in the various zones. Though there were certainly flaws in the previous approaches that broke the immersion, Fatal Bullet‘s step back from that without any attempt to replace it is an even bigger breaker.

The brand of shooting in Fatal Bullet is fast-paced, without any cover mechanics. There is a very friendly auto aim, which feels necessary on the smaller, quicker opponents as well as certain mechs that like to hover in areas untargetable by the manual aim. There are melee weapons available, but they can be awkward and have clearly been added primarily so Kirito’s appearance in GGO can be emulated. Players also have access to a sort of zip-line that can move them around quickly, but the way the camera flies around makes its use in the thick of combat very limited. It certainly isn’t going to greatly challenge the top shooters around, but running around and downing enemies that dissolve into a puff of polygons can be enjoyably cathartic, while some bosses provide some interesting mechanics. 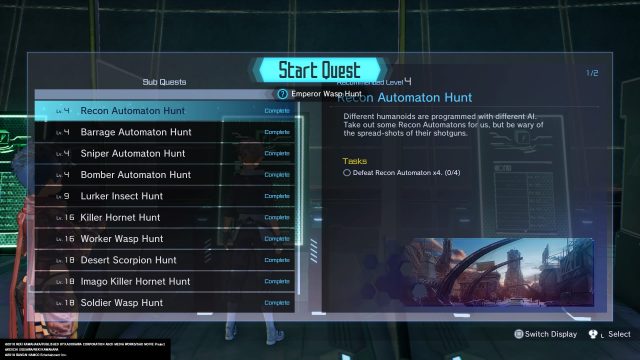 The difficulty balance swings throughout the game, though there is leeway to adjust it. Early portions are fairly easy, with players simply able to get by as long as they keep moving. However, it starts to ramp up things by throwing enemies at considerably higher levels into each new zone, seemingly under the impression that its generic hunting side quests and uninspired combat would be enough to have players grinding up several levels in between story events. The game also starts adding enemy designs that are mostly challenging due to their incompatibility with the combat system, as well as highlighting the flaws in the AI allies, resulting in combat that actually manages to get less enjoyable as time goes on.

Going through dungeons, there’s very little reason to explore. The chests that may be slightly hidden away don’t provide enough to justify actively seeking them out. Virtually none of the in-game excitement happens on screen. This makes it all the more grating when large portions of the character event scenes appear to take place during or immediately after events that sound like they would have been exciting to participate in. Dungeons also shamefully share an identical theme and template throughout the game. Every time players enter a dungeon they will be met with a nondescript abandoned facility populated by pretty much the same hostile robots, even those dungeons whose names indicate that they clearly shouldn’t be anything of the sort, such as the Abandoned Road.

The loot system is another aspect that fails in adding interest, particularly on the weapon side. Though there are different rarities, a rare weapon will simply be a version of a common weapon that has better stats rather than being unique, leaving players with just an unexciting, heavily-repeated list. There is no armour, instead players can find ingredients to craft (or can just outright buy) a single outfit item that can be dyed. There are also a couple of accessory slots that provide both aesthetic changes and passive bonuses, but these aren’t much better than weapons for variation. The way the UI is set up also makes it a pain to try and compare items to figure out which is best. Other systems, such as skills and crafting, also suffer from lack of clarity and just provide an obtuse mess that is difficult to interact with. 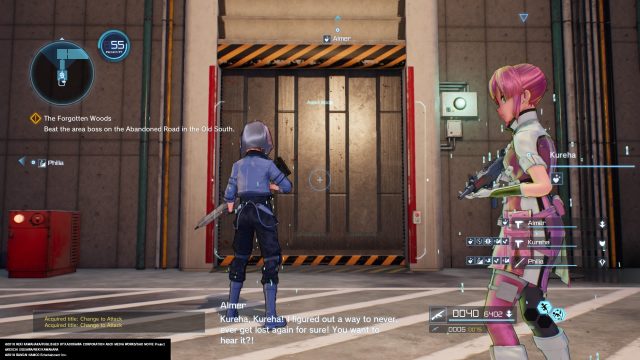 This is view you are met with when you enter the “Abandoned Road”. It looks like that all the way through.

Though production values are improved, not much effort has been expended getting the most out of the system. The vast majority of conversations simply amount to a row of characters staring at the player with a generic background behind them. In addition to the aforementioned lazy dungeon templating, the rest of the locations fail to make any visual impact despite the sci-fi setting. The visual effects behind the action are decent enough, but certainly nothing to write home about.

Unfortunately, all the in-combat chat is entirely in Japanese (with the exception of the word ‘sniper’) and none of this is subtitled, so is generally completely useless for non-speakers. Quick side conversations that are subtitled between a couple of party members can come up during exploration, but that actually amounts to the same couple of conversations for each combination of characters being repeated umpteen times. The Japanese voice acting generally is fine, and the same goes for the music and sound effects. They do an acceptable job but are immediately forgettable.

Saying that Sword Art Online: Fatal Bullet is at least playable is the best compliment I can give it, as there’s occasional fun to be had from running around and shooting things, though not nearly enough. Almost everything else about the game amounts to a sterile waste of time. The story is vapid, the variety of locations and enemies is practically non-existent, and everything you do in the game feels completely pointless. It’s not even content I’d recommend to diehard fans of the series, as there’s not really even enough of that here to matter. Fatal Bullet was a chance for the game portion of the Sword Art Online franchise to step up and shine under a new developer with a new gameplay focus, but instead the entire thing shamefully fell flat on its face.