Sword and Fairy: Together Forever Review

A Tale of Three Realms

Three years ago, I reviewed Sword and Fairy 6, the first game in the beloved Taiwanese-developed RPG series to receive an official English release. I praised the game’s narrative and music, with the Chinese mythology feeling like a breath of fresh air compared to other RPGs. However, I also criticized it for its poor optimization as the game itself could never maintain a stable frame rate. That, combined with the game often crashing or freezing, made the act of playing it incredibly frustrating. Despite this, I still have some fondness for it even if I think it’s difficult to recommend. This made me curious to see if Sword and Fairy: Together Forever would manage to be a more playable experience while having the storytelling chops that made the previous entry so refreshing. I’m glad to say that, while it still has some rough edges, it is a noticeable improvement in terms of production values and playability.

Yue Qingshu is a disciple of the declining Mingshu Sect — serving under the tutelage of her grandfather — who has the ability to form contracts with spirit beasts. After rescuing a child named Ziqiu, who is the vessel for the Deity Lord Aoxu, she is forced into a symbiotic connection with the deity warrior Xiu Wu. The situation is further complicated when strong monsters called Vicious Beasts mysteriously start going out of control, attacking the human realm and endangering innocent lives. Under the command of Lord Aoxu, Qingshu and Xiu Wu are tasked with investigating the cause of these attacks and are joined by Xianxia Sect disciple Bai Moqing and her admirer Sang Yo. From the get-go, it’s clear that the story is the most involving aspect of the game, with a sizable cast of characters who get their fair share of focus.

While the involved storytelling can be overwhelming to those not familiar with Chinese mythology, the narrative does a good job anchoring the proceedings with an engaging cast of characters that are sympathetic and fully realized. It’s hard not to feel for characters like Qingshu and Moqing, both of whom are forced to confront the sins of their upbringings. Even Sang Yo, who initially only seems like a goofball with a borderline infatuation with Moqing, is shown to be someone who wants to protect those he cares for due to events in his past he feels guilt over. The way character relationships — especially the forbidden romance between Qingshu and Xiu Wu — develop and the various multitude of plot threads that weave around them make for a story that is compelling from beginning to end. 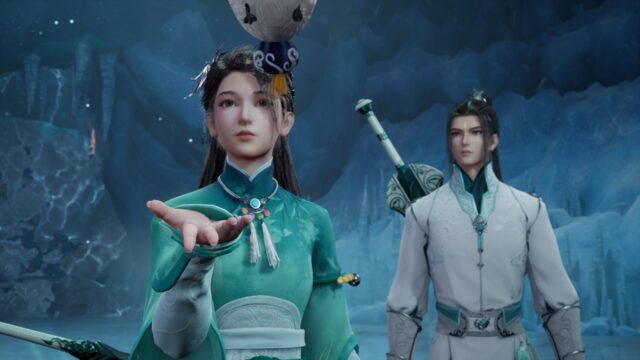 Several moments in the story are punctuated by well-directed cinematic cutscenes.

However, if there’s one thing that could potentially be considered the story’s Achilles heel, it’s a translation that unfortunately reads quite stiff even at the best of times, with sentences that feel awkwardly structured and could have used a few more editing passes. While it’s generally not hard to follow what is being said, the translation often reads overly literal. Considering that the story is such a big part of the experience, it’s disappointing that there wasn’t more care taken with the translation, as it could be a potential turn-off to those who would’ve otherwise appreciated the story.

In addition to the main storyline, there are side-quests to undertake and, while most of them aren’t particularly memorable, a few do provide interesting expansions on the world and character backstories. One questline elaborates on the history between Moqing and Yo; while another has Qingshu attempt to convince a spirit beast to reconcile with the Mingshu Sect to make up for past grievances with how they were mistreated by the Sect’s previous caretakers, helping to enrich the game’s main narrative.

Unlike previous games in the series, enemies are fought in action RPG combat that is decently executed, with plenty of flash and fast-paced action to keep things exciting. Light and heavy attacks are mixed with the different abilities of each party member, including spells for healing, elemental attacks, and strong physical abilities. Players can freely switch between the game’s four party members, allowing them to experience their different fighting styles and weapons. Whether it’s getting close and personal with Xiu Wu’s swordplay, using Qingshu’s spirit beasts to cast strong elemental magic, or staying cautious using Sang Yo’s crossbow and potions, there are enough options to prevent combat from feeling too monotonous. Being mindful of when to dodge attacks is particularly crucial since tougher enemies are generally not phased by mindless button mashing. A gauge in the left corner of the screen fills up as the player lands hits on enemies, allowing each party member to either be temporarily powered up or, if completely filled, summon a deity that takes over for the entire party for a short amount of time. This deity is impervious to damage and has a powerful special attack that does damage to all enemies within close proximity. 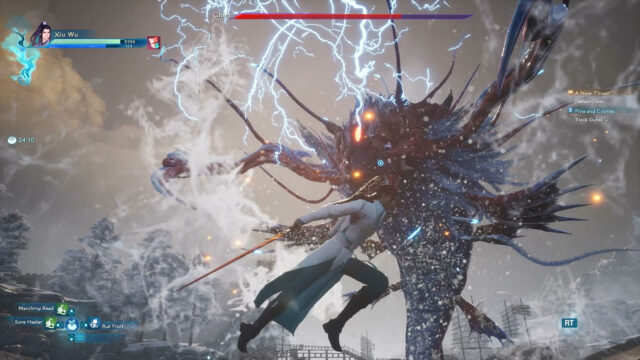 Boss fights are where the combat shines the brightest.

However, the combat isn’t without fault as regular enemies are fairly easy to take down on normal difficulty, especially as it is not possible to switch difficulty settings mid-game. The player isn’t limited in the amount of healing items that can be used in regular encounters. Boss fights, on the other hand, not only limit how many recovery items can be used, but are usually a step up in the difficulty department thanks to AI that isn’t afraid to punish players that aren’t scrupulous in timing their attacks and dodges. These boss encounters are generally something to look forward to, as they are often where the combat is at its strongest. However, a couple boss fights suffer from the camera being either too close or pulled too far back, making it harder to avoid certain attacks. Fortunately, this is really only an issue in a few isolated instances and only a relatively minor setback in an otherwise perfectly serviceable action RPG.

The game occasionally asks the player to partake in some light puzzle-solving, such as having Xiu Wu using his deity powers to shot out-of-reach icicles to help the party get through an ice cavern or switching between two sets of party members to navigate through an area after getting separated. These are one-off affairs and aren’t particularly memorable or engaging, but are a good change of pace that don’t overstay their welcome. Unfortunately, the same can’t be said for the mandatory stealth sequences where the player must guide Sang Yo through a field of guards without getting caught, resulting in an instant fail. These are quite dull and unengaging, and feel tacked-on despite the game’s best efforts to switch it up by giving Yo a couple different ways to deal with guards or even bypass them altogether by turning invisible for a short amount of time. The only real positives are that there are only a few of these throughout the game and that they are mercifully short.

As the player explores the world’s nook and crannies, they can also challenge the various Leaf Fairies into a game of Journey Earth-Heaven, a rock-paper-scissor card mini-game where two opponents must choose between green, red, and blue cards from their decks and pit them against each other. Each match-up results in either a win or a draw, with the opponent losing life points if they play the losing card. Journey Heaven-Earth won’t win any “best mini-game in an RPG” awards, especially as winning does require a stroke of luck at times, but it is still a pleasant diversion, with the player obtaining a new card for their deck from every defeated Leaf Fairy. A less pleasant diversion are the Leaf Fairy Jump challenges where the player can try their hand at platforming their way onto rotating leaf-like platforms that will lead to treasure. These are less successful due to the finnicky and stiff jumping, making it frustrating if a jump is missed and the player has to start the challenge all over again. Thankfully, these are optional and not required to progress for anyone who just wants to zip through the story. 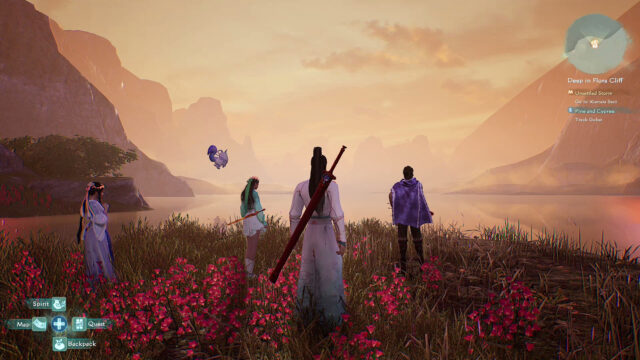 Just one of the game’s many gorgeous environments.

Together Forever isn’t the most polished or systematically complex RPG by any means, but still showcases an incredibly engaging and rich world, thanks to some genuinely gorgeous environments that breathe a lot of life into the game with lively towns, flora, and fauna. The appealing and well-animated character models of the game’s major players, along with the atmospheric lighting, also help to make it difficult to not get lost in its world. This is further enhanced by music that does a great job of giving off the right mood, whether it calls for something dramatically intense or calming and contemplative, with the heavy use of Chinese instruments that give the game a distinctive flavor from other RPGs of its ilk. The Mandarin voice acting also does a good job of conveying the varying emotions of the narrative, somewhat compensating for the less-than-desirable translation.

While Sword and Fairy 6 suffered a lot of technical issues that made it borderline unplayable, Together Forever is thankfully a much smoother experience as the actual gameplay never suffers from the frame rate issues that plagued that previous entry. This is crucial as this is a full-fledged action RPG where a smooth playing experience is a necessity. That’s not to say that there weren’t issues encountered during the review playthrough, with minor texture pop-in when entering areas or cutscene transitions, missing subtitles in one cutscene, and even a few crashes early on. Not to mention a glitch that caused the music to keep looping, necessitating a reload to a previous save as well as out-of-sync audio in a couple cutscenes. It should be noted, however, that effort has been taken by the developers to patch them out, so players will be less likely to encounter these annoyances on their own playthroughs.

One issue that sadly wasn’t fixed much is the too-small font text. Though subtitles and incidental dialogue at the very least have a few options for font sizes—even if these could still afford to be a tad larger — UI and menu text seems like it doesn’t account for console players that are a further distance from their TV screens than PC players. This is a disappointing oversight that makes the game less accessible to those with visual impairments.

I finished Sword and Fairy: Together Forever after 35 hours of playtime, including a great deal of the sidequests and activities. With so many of the big modern RPG releases often requiring a massive time sink, it’s always nice to experience one that feels meaty without feeling bloated. The action RPG combat is enjoyable, if not outstanding, and the world and storytelling are really engrossing. While some aspects have room for improvement, the game left me optimistic for the future of the series, hopefully with more attention paid to the quality of the translation next time.