The Chinese Paladin series has been massively successful in China and Taiwan since the release of the first game in 1995, including several spin-offs and even a couple of live-action TV dramas adapting the games. The series had never had any official releases outside of Asia until developer and publisher Softstar Entertainment released the latest installment, Sword & Fairy 6, on PS4. While this latest installment has a compelling story worth experiencing, the game is riddled with technical issues that make it difficult to recommend.

The story of Sword & Fairy 6 starts off with a confrontation between Luo Zhaoyan and two alleged members of an infamous cult known as the Risen Soul Saints. After a brief fight, the two members, Yue Jinzhao and Yue Qi, reveal to Zhaoyan that they are only faking their membership in the cult. They both agree to cooperate with Zhaoyan in her investigation of the nearby shrine where they discover human-like statues and documents that reveal that the beggars they kidnap are being treated like cattle. Joining them are the socially awkward mechanic and True Martial Alliance member Ju Shifang; the cold, passive aggressive mage Ming Xiu; and stoic wolf demon, Xian Qing, all of whom have their own motivations. It doesn’t take long for them to catch the attention of the cult as well as the mysterious organization known as the Hengdao Society, who are interested in Jinzhao and Qi for reasons unknown. As they uncover exactly what the cult is up to, they get caught up in a conflict between factions that potentially threatens all of mankind.

The narrative and cast of characters prove to be Sword & Fairy 6’s strongest asset. As the conflict unravels, it becomes clear that the story is not so much about good versus evil but a story of factions working towards their own goals and ambitions. This is supported by excellent use of the characters, with none of the major players in the story quite being what they seem at first glance. This extends to the antagonists, who are revealed to be just as complex and multifaceted as the game’s six party members. The game deftly explores what it means to fight against pre-determined fate, exercise free will, as well as the lengths friends and foes go to protect those loved ones. It’s not uncommon throughout the game to spend a couple hours at a time going from cutscene to cutscene as the story unfolds; though it can get long-winded at times, it’s a testament to the strength of the story and characters that it never feels extraneous. While the story is mostly told with in-engine cutscenes, there are some animated cutscenes sprinkled in. These are rather poorly animated and have a muddy, dull look to them but do a good job carrying scenes that the in-engine one wouldn’t have. 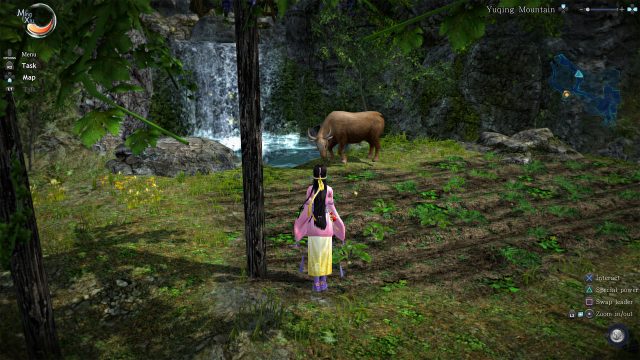 Players can switch between the game’s party members with the press of a button.

While the overall story is great, the translated script is passable at best, loaded with awkward syntax, grammar and spelling mistakes, as well as a few bits of untranslated Mandarin towards the end of the game and a line of code accidentally left in a cutscene early in the game. Though distracting at times, these errors thankfully aren’t a hindrance to the players’ enjoyment of the narrative. What will be a hindrance to some players are the subtitles, which are small and sometimes blend into the background or the character models. This issue is at its worst in the opening sections of the game, giving a bad first impression.

What will ultimately end up being a deal breaker are the rampant technical issues. Sword & Fairy 6 is unable to maintain a steady framerate during combat. It’s common for the framerate to dip into the single digits during the first few seconds of almost every cutscene and during transitions to gameplay. These framerate issues are the most pervasive of the technical problems but sadly aren’t the only ones. Crashes occur seemingly at random, which force players to restart and reload from a previous save. There is also a frustrating, though thankfully rare, game-breaking bug that can cause the game’s camera to get stuck on a part of an area whenever the player enters from the Cloud Ark, the game’s equivalent of an airship. In addition to breaking cutscenes that happen to activate, it can also mess up the game’s physics, which means the player will have to reload a previous save. Since the player is allowed to save whenever they want, the frustrations can be minimized. 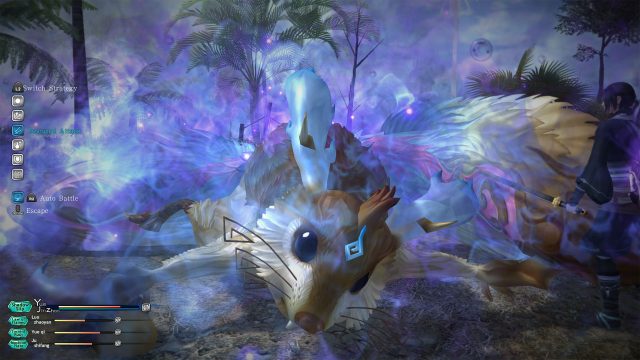 Combat often suffers due to the game’s abysmal technical performance.

In typical RPG fashion, when players are progressing the storyline, they can explore towns, do sidequests for NPCs, and participate in battles. There are some features that help add variety. Players can switch between party members while they walk. Each party member has a special field ability that can be used in context-sensitive situations: Jinzhao can jump to certain waypoints, while Qi can lift objects that help with navigating the environments. Others, like Xiu’s ability to enter first-person mode and shoot projectiles or Zhaoyan using her one-handed weapon to cut vines, are only used a couple times throughout the game. Characters can also jump, allowing them to find hidden treasures. While jumping is stiff and fairly rare, these combined small ability moments do a good job of preventing monotony.

There are a few gameplay shifts that, while narratively justified, end up being speed bumps to the overall experience. A mandatory quick time event not too far into the game can potentially stop players from progressing as the technical performance dips horrifically, making it harder than it should be to execute. There’s also an on-rails sequence with a dragon late in the game that should be a cool moment but suffers due to stiff controls that can make it difficult to dodge the dragon’s projectiles, even if the sequence itself isn’t particularly difficult and only needs to be done once. 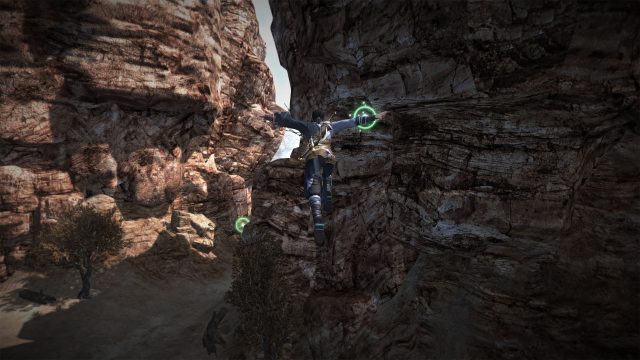 The occasional use of character-specific field skills helps break up the game’s pace.

Sword & Fairy 6’s combat has the player control one of the party members while the rest are A.I.-controlled, acting on what the player tells them to concentrate on, such as attacking, defending, healing or buffing. The player selects skills of the character they are controlling, like defense break skills that will increase an enemy’s defense break gauge, which causes said enemy to stagger when filled and leaves them vulnerable to stronger attacks. The player-controlled party member then executes these skills after one or more sections of the time bar is filled up, with stronger skills needing more sections of the gauge filled in order to be executed. Players can also use limit break-like special attacks that can buff the entire party, do a team attack with another party member, or a character-specific attack that requires the player to repeatedly tap the action button in quick succession to maximize damage. These can be pulled off one after another provided the player is able to pull off a simple quick time event after each one until the end of the sequence.

The battle system is simpler than it sounds on paper. However, it does suffer from a few issues that hinder it. The game fails to teach players its combat system in a succinct and straightforward manner, instead presenting pages of intrusive instruction that manage to obfuscate how to use various combat systems. It’s possible to play a lot of the game without taking advantage of the enemies’ elemental weaknesses. In addition, the defense break system ends up being wasted on normal enemies as the party will generally be able to deplete their HP well before the break gauge is filled, making said mechanic feeling unnecessary outside of boss battles. However, the biggest problem is ultimately how combat ends up buckling under the game’s abysmal technical performance, especially as spell effects from both party members and enemies alike fly around. This also causes player inputs to not register properly, which will cause button mashing in order to execute skills. At its worst, this can make combat a chore that actively gets in the way of the player’s enjoyment.

In addition to party member leveling up by gaining experience points in combat, they also gain soul points, which are distributed in the Meridian, which is similar to the Sphere Grid from Final Fantasy X or the Crystarium from Final Fantasy XIII. These soul points are used to upgrade the party members’ body, mind, and soul, which gives enhancements to their health, attack power, defense, magic, and speed. Distributing these points whenever possible is vital to making sure the party members are beefed up for later encounters. 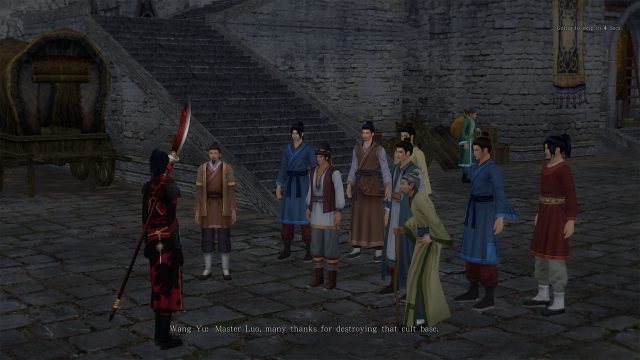 The game’s compelling narrative is told through liberal use of lengthy cutscenes.

Sword & Fairy 6’s visuals are fraught with problems. In addition to the at-times unbearable technical performance, the game suffers from bad draw distances, texture pop-in, and visual glitches that even show up during cutscenes. Character models are stiffly animated and aren’t anything to write home about though the designs themselves are quite appealing to look at. Environments are inconsistent, with some looking quite beautiful and colorful and others having a dull, bland look.

In contrast, the music is beautifully composed, with a good mix of orchestral pieces and Chinese folk-sounding music. There are multiple battle themes throughout the game, meaning the player will never hear them enough to get sick of them and they do a great job selling the intensity of battles. Not to mention the beautiful pieces that enhance the game’s emotional scenes. The soundtrack is overall on par with some of the better RPG scores in recent memory. While it’s hard to fairly judge the voice acting due to it being in Mandarin, it does a good job of compensating for the stiff character models during cutscenes.

Sword & Fairy 6’s impressive narrative and memorable cast should make it easy for me to recommend, yet the game’s many technical issues make it a hard sell. Criticized heavily for these issues when it was released in China and Taiwan in 2015, it sadly seems not much was done to fix them and, considering the length of time since the game’s launch, there’s not much chance for these issues to get patched up. While I cherish the experience I had overall, recommending it would require a lot of caveats.