A Shift to 2D Falls Flat

This past June, RPGamer staff spent an evening discussing a bevy of Compile Heart games on the RPG Backtrack. The consensus was that often the games have decent battle mechanics, but the gameplay is often buried beneath a near insurmountable wall of text that rarely is important to story development. Ironically, being the first 2D Neptunia game and co-developed by the Canadian company Artisan Studios, Super Neptunia RPG suffers almost the exact opposite problem. Battles are a slog due to certain design mechanics, and a persistent lack of text hampers many aspects of what otherwise is a refreshingly different Neptunia experience.

Like in many of the other games, Super Neptunia RPG opens with the titular hero, Neptune, waking up without knowledge of where or who she is. She quickly adapts to her situation and learns that she’s been somehow transported to a land of 2D-only video games, with the creation of 3D games strictly forbidden. The premise for the location is a perfect fit for the first 2D outing for Neptune, Blanc, Vert, and other series’ staples. As they find each other and ally themselves with various factions throughout the game, the story becomes just a vehicle to do what it does best: humorous, callback-filled fanservice to other game series and game systems. The first battle consists of Neptune picking up a Dragon Quest-style cypress stick to fight slime-like creatures called dogoos, yelling “I choose you!” as she attacks, and then whistling the Final Fantasy victory fanfare when she wins. That one battle is pretty much a microcosm of the entire game. 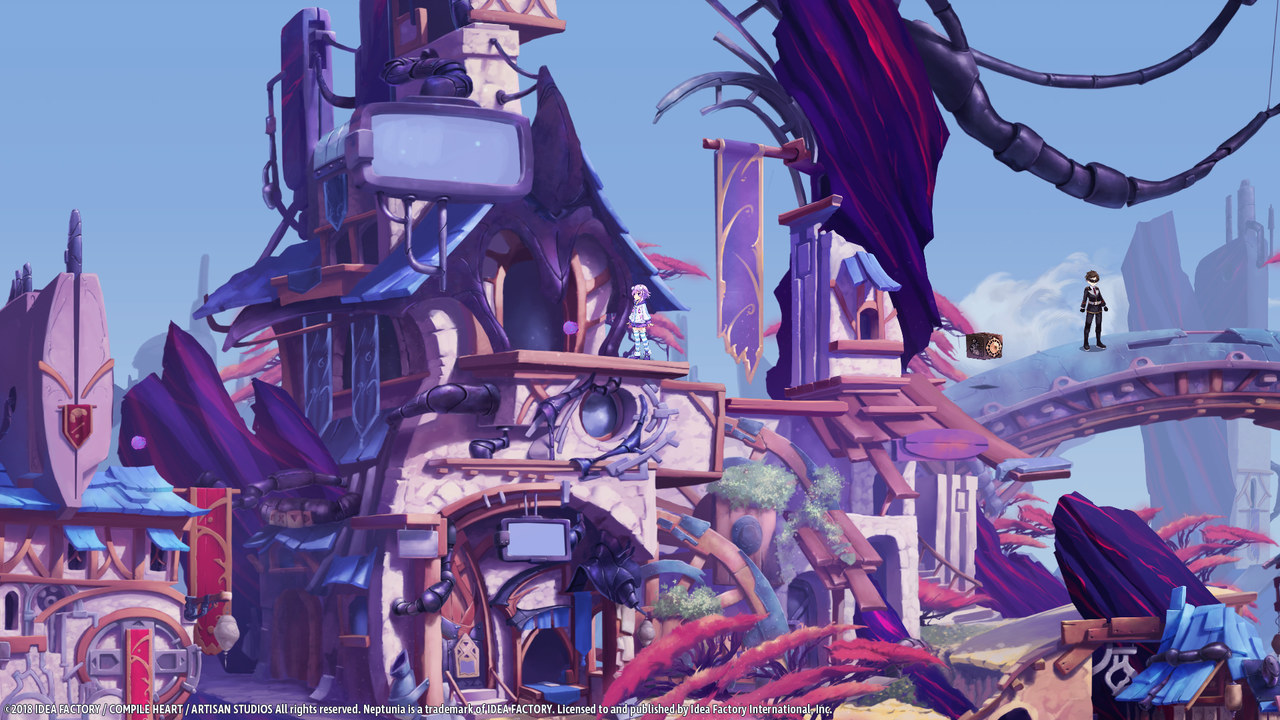 The beautiful backgrounds belie how difficult it is to find where one can enter houses, or which platforms can actually be jumped on.

Though there’s plenty of humor, without an especially engaging story to fall back on, Super Neptunia RPG is left to try and impress gamers in other ways. The first big positive is the art direction. The crew at Artisan Studios lives up to its name with a beautiful looking game consisting of bright, vibrant backgrounds with plenty of small details to behold. Various locales in the game have quite different ambiances to them, making the 2D platforming world full of visually interesting places to explore. Unfortunately, this also presents an issue. The intricately designed backgrounds make it difficult to see paths to take and buildings to enter in town. There are small graphics that appear to guide players down various paths, but too often those graphics are placed over busy backgrounds and are nearly impossible to spot. When characters stand still, they’re impressive to look at as they sway slightly or have their hair blow in the breeze, but when they start walking, their movements are akin to those of stiff marionettes.

A specific graphical issue follows players into the battle system as well. As Neptune navigates her 2D world, enemies are visible, and players can choose to run into them to start a battle, or navigate around them. Early battles almost always include a dogoo monster, so seeing dogoo monsters move around the screen during platforming at these times makes sense. However, after an hour or so, when Neptune has moved onto fighting other enemies, seeing most of the encounters signified by dogoos is jarring. This persists until the end of the game, and the lack of any heads-up as to what kind of creatures players will encounter is always a mild annoyance. Monster models and animations in combat are slick and well-animated, so it’s a shame they aren’t used outside of battle. 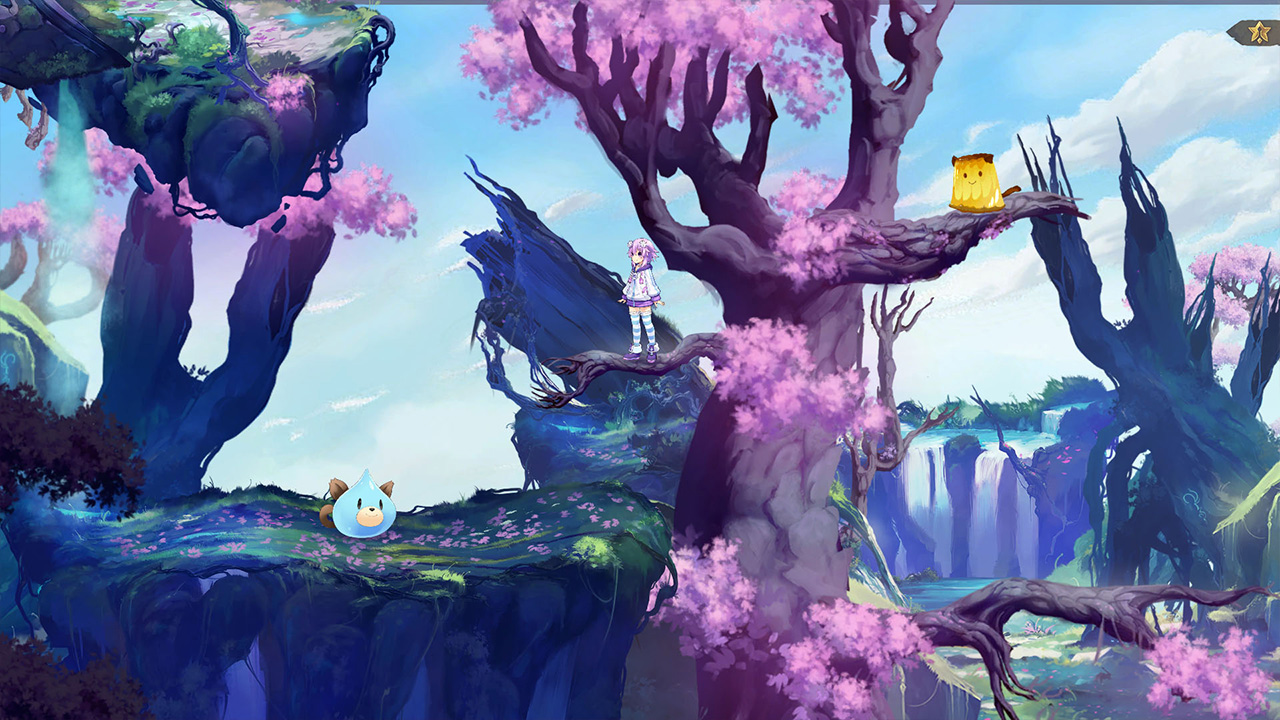 It may look like a dogoo, but it’s much more likely to be many things that aren’t dogoos.

As touched on earlier, a positive with Super Neptunia RPG is the relative lack of long expository moments. Outside of a few scenes, characters get to the point and the game can progresses quickly. Unfortunately, the game goes a bit too far in avoiding text on the UI and makes it hard to navigate. While platforming, pausing the game shows the map for the entire region, complete with where exits to cities and dungeons are. Sadly, those exits have no labels, which makes navigating larger areas with as many as six connection points a lesson in memorization. With the amount of backtracking required throughout the game, unlabeled maps result in plenty of unintentional side trips. A similar issue can be found in the battle system, when different characters have different attacks all linked to the various buttons. Short of pausing the game multiple times throughout each encounter, none of the attacks are labeled. This needlessly slows down what should have been a quick and easy battle system.

Instead of turn-based, menu-based combat, battles play out similarly to those in Valkyrie Profile with up to four protagonists each assigned to one of the face buttons and lined up on one side of the screen, with their opponents on the other side. An action point (AP) gauge slowly fills and the button icons appear over the characters when they can act. Moves must be assigned outside of battle in a deeply customizable fashion. When four characters are in battle, four stances must be prepared with a great deal of skills and spells available to each character: some learned inherently, some available due to equipment, and some mastered via repeated use in battle. Stances can be changed on the fly during battles with the L and R buttons allowing for players to bring up to sixteen skills into any encounter. This becomes a memorization nightmare as skills aren’t shown when attacking, too often leading players to either pause battles numerous times to check what they’re doing, or simply just button mash through a great deal of encounters.

The lack of labeling isn’t the only thing holding back the battle system of Super Neptunia RPG. The mechanics are simply not optimized for a party of characters. The common AP gauge is built such that usually only one character can attack, and then all must wait while most opposing monsters get shots in. Battles play out no faster with four characters than they do when circumstances limit players to one or two. Elemental resistances and weapon types also complicate any sort of battle flow as certain elements can actually heal monsters and and no easy on-screen cues to alert players to this without, again, pausing the game. Minor encounters can turn into turn into long battles of attrition. One final point of annoyance is that players cannot target healing spells. They target the character with the lowest HP, but this isn’t always optimal when multiple characters are low and players want to save specific ones first. 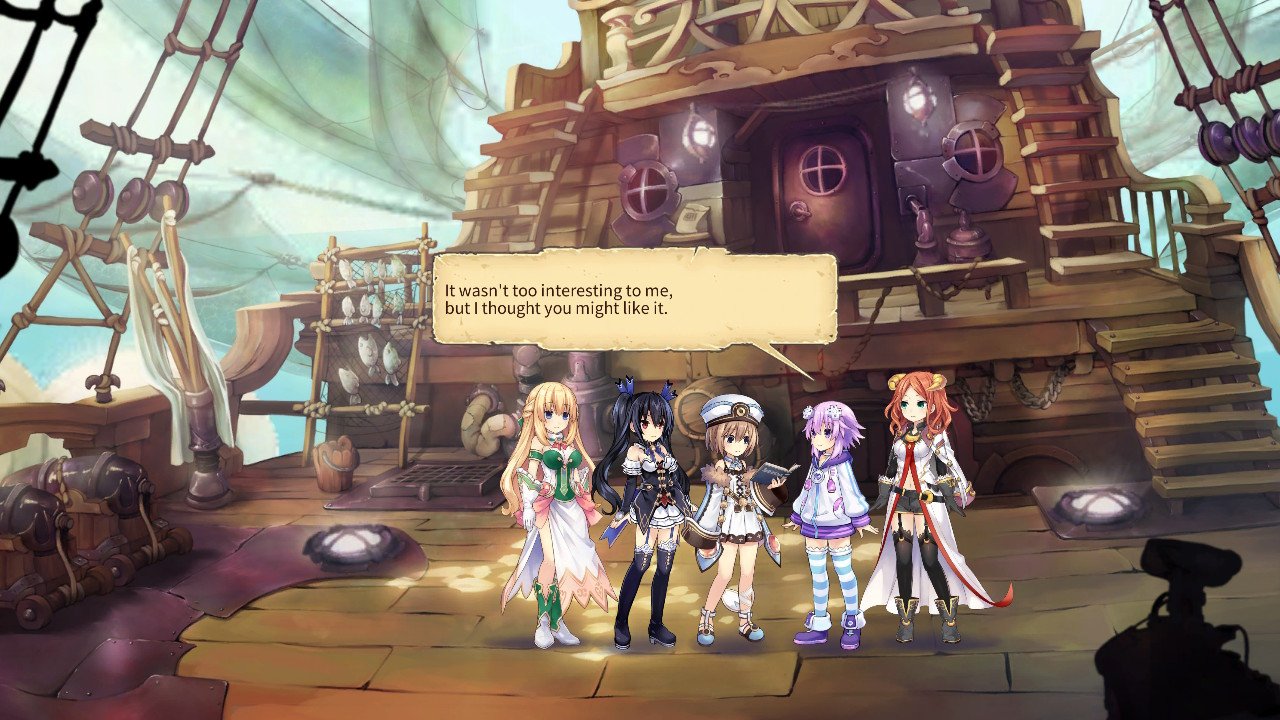 While the nice backgrounds lead to issues later on and the animations are choppy, the music score is good and stays enjoyable throughout. Most story scenes are fully voiced in English and done so with great care to nail the joking tone and flippant nature of the characters and story. The little comments Neptune lets out during battle or even jumping through the platforming sections will bring a smile to gamers’ faces or even an occasional chuckle. The decision to include an English dub here greatly improves the game experience.

At the end of the day, Super Neptunia RPG does quite a few things differently than other titles in the series; a few that improve the experience, a few that make it more frustrating. For those who have previously enjoyed the tales of Neptune and her crew, it’s possibly worth a try, but for those uninitiated, this won’t create any new Nep Nep fans. While I went into this game excited to try a different type of Neptunia, it hardly held my attention for more than a half-hour at a time, requiring a lot more stamina and time than it should to complete a game that clocks in well under twenty hours.