A Journey with Several Dark Crashes

A few months after the release of the much-praised Star Wars: Knights of the Old Republic on the Switch, its standalone sequel lands on the same platform. Star Wars: Knights of the Old Republic II: The Sith Lords was originally released in 2004 for the Xbox and has since been ported to several platforms. The KOTOR series tries to lure both fans of Star Wars and RPGs by mixing lightsabers, droids, and spaceships, with varying classes of Jedi, character customization, and story-driven decisions. It is undoubtedly inviting to be able to choose a path of light or darkness in the Star Wars universe; the battle system, however, isn’t what most players would desire. Like its original version, the Switch port is regrettably glitchy, but the game is still worth the time since the characters and soundscape are great.

It is not necessary to have played the first entry in order to enjoy and understand the events of Knights of the Old Republic II since they are satisfactorily explained, though having done so does help with immersion since there are references to many characters from the first game. Players take on the role of an exiled Jedi, choosing among different classes as well as the physical appearance, skills, and attributes of their hero. The plot begins with the player and a Sith warship narrowly avoiding destruction and being picked up by a ship of the Republic. The Sith take over this ship and try to kill the protagonist, seemingly the last Jedi. As a consequence, players have two propelling motivations: take down the Sith and restore themselves to the Jedi Order. They visit different planets and meet colorful characters in their adventure. Every place they land is full of problems, and they get trapped between fighting groups, which ultimately forces them to take sides, making allies and foes at the same time. These dilemmas deliver the experience of deciding the destiny of the galaxy, and references to the Republic, Jedi, and Sith really help to make it feel as part of the Star Wars universe even when these games are not considered part of the canon.

There are diverse comrades who join the party with different interests, problems, and intriguing personalities. The party is made up of droids, bounty hunters, and fighters trained in the ways of the Force, with all adding something different to the journey. The most cryptic companions even help to make the plot more obscure and mysterious. It is also engaging to experience how the protagonist is haunted by the events during the Mandalorian Wars and how some characters struggle to try to find a path in the Force. The main quest manages to keep players interested since there are many well-preserved secrets, and the more answers the heroes find, the more questions they’ll have. However, more than having a remarkably captivating story, Knights of the Old Republic II has great characters and interactions among them. Sidequests include welcome chances to aid those in need or to be relevant in the galaxy, ranging from casual problems like helping a desperate creature get a traveling visa to creating a lightsaber or rescuing imprisoned denizens. One of the few downsides is that the story doesn’t properly conclude and leaves many loose ends, making the game feel somehow incomplete, though some post-launch content promises to address that issue. 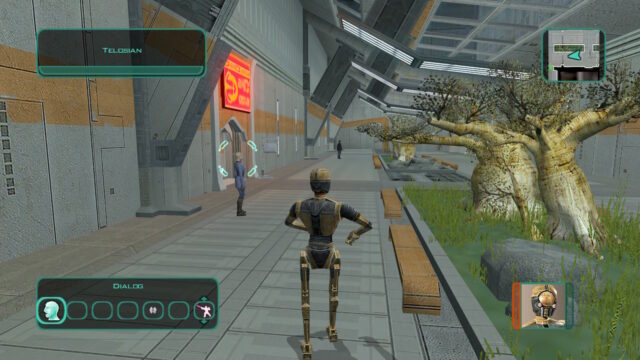 It wouldn’t be Star Wars without droids.

One of the features that makes KOTOR II significantly attractive is that players create their own path depending on their choices, allowing them to lean towards the Light Side or let themselves be seduced by the Dark Side. Most actions have a meaningful impact in the universe and grant Force points depending on the decisions taken and even the choice of words. There is a difference in character growth when saying “I’ll only fight you if I don’t have a choice” rather than “Die, traitor”, even if both choices are followed by the same outcome. Those leaning to the Dark Side can ask for more money as a reward or kill others to take advantage of situations, while those who want to follow the Light Side can decide to pass on rewards. If players manage to gain enough points on one side of the Force, they receive fighting bonuses such as increased strength. While players are free to choose the path they prefer, they also gain or lose influence on some party members depending on their decisions. This freedom is great and even invites replayability.

Exploring is another essential part of the game. There are icons that show which objects players can interact with. Each character has a different level in their exploring skills, which include repairing systems, treating injuries, or accessing doors and terminals. Players also have a lot of freedom in their choices while exploring, such as allowing them to repair droids or overload them. There are several NPCs that offer sidequests, which add a lot of content to the overall story. Each planet has its own peculiarities and offers different things for players to do, and since maps aren’t enormous, it isn’t a challenge to explore every inch of each location and meet every character. To please those who want to do other things than saving the galaxy for a while, there are mini-games such as flying a spaceship in timed races or a simple but entertaining card game, in which they can bet credits. 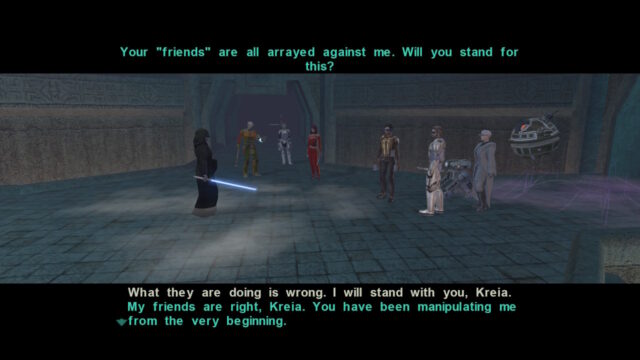 Players usually have many possible answers which may change how the events unfold.

Those who want to aim their blasters or master the lightsaber to defeat their enemies will find the battle system a little uninspiring. Party members fight on their own, including the selected character. It happens in real-time, with foes and allies attacking and dodging automatically while changing targets as soon as the current one is killed, with their stats affecting the effectiveness of their attacks and the amount of damage. Players still have the chance to use objects such as shields or medipacks, as well as abilities during combat. In addition, they can pause the actions and select their next move or use fighting stimulants to power up their warriors. The battle system surprisingly becomes more entertaining as more abilities, force powers, and other ways to have a meaningful impact in combat become available, but it never reaches a point where it could be described as exciting.

Winning battles and completing quests grant experience to all the party members. When characters level up, players can increase their attributes as well as add abilities and enhance their exploration skills. The game gives players the option to level up automatically or manually, which is a nice bonus for those who don’t want to delve into the system’s finer points. Fighters trained in the ways of the Force can use special abilities such as healing or stunning enemies. Diverse status ailments also have a direct impact on combat, allowing players to add them to their strategy. There is also a vast array of weapons and armor that can be upgraded using work benches. Most equipment has requirements that characters need to unlock before being able to use it, forcing players to think carefully when they level up their characters. All these features allow players to customize their party in satisfying ways. 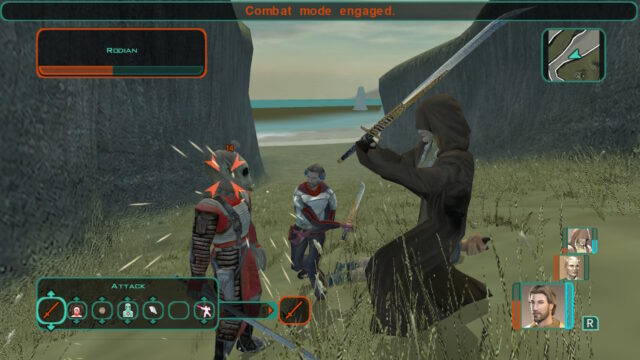 When words aren’t enough, swords and blasters tend to be the only answer.

The soundtrack includes some well-known tracks of the series and some new ones that use the same instrumentation, matching neatly with the iconic soundscape of Star Wars and making the overall sonic experience solid and noteworthy. As is the norm for a Star Wars game, sound effects help to make battles and cutscenes more impactful. Voice acting is not remarkable, but it is good and helps the game to feel modern. Visuals were improved, but some aspects still feel outdated. However, once players get used to them, they can still complete the illusion of exploring the Star Wars universe. Each planet is visually discernible and has its own characteristic features. Blasters, lightsabers, armors, and characters also have good designs.

Most of the complaints that gamers had when the game was released many years ago concerned its many glitches, and unfortunately, these are still present. This issue may even prevent some players from completing the game. It crashes constantly, so saving continuously is recommended if one doesn’t want to lose a lot of progress. In its current state, some loading screens cause the game to close unexpectedly and may require players to try their luck until the game allows them to pass. There are other occasional issues such as characters moving strangely during the dialogues, and while these don’t affect the gameplay, they do break any built-up immersion. Another negative aspect is that it is evident that the game is a port because some menus seem strange to control or access instead of being optimized for the Switch’s controller.

Both fans of Star Wars and RPGamers will find many likable features in Star Wars: Knights of the Old Republic II: The Sith Lords, from the way each character feels fleshed out to how the dialogue choices impact the destiny of the galaxy. However, in its current state, the game is barely recommendable since crashes will be present constantly. Some polish would greatly benefit the game, and with the announcement of a remake of the first entry, it is inevitable to wonder if this one will get the same treatment. I hope it does because most of the issues with the game can be addressed and the outcome could be an outstanding game instead of an average one. 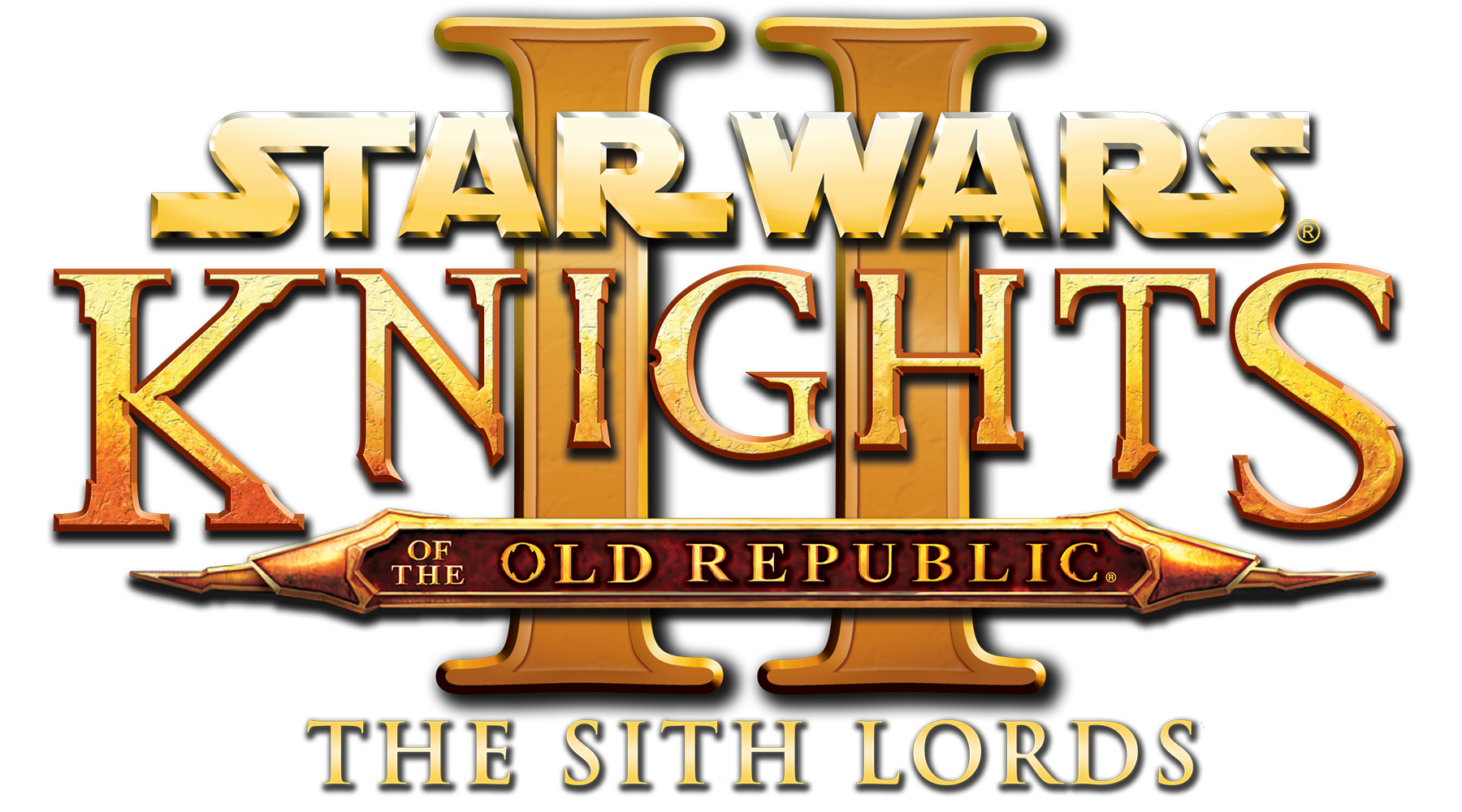