Asymmetric Publications returns players to its bizarre Loathing universe with Shadows Over Loathing. Following the success of West of Loathing, the developer this time takes players to its take on an Eldritch-infested 1920s America. Packed with humour, and with its trademark stick-figure graphics plus a fair share of interesting puzzles and vignettes to explore, the game once again provides a thoroughly entertaining and decently condensed RPG experience.

The game starts with players embarking on a bus journey to Ocean City, coming at the request of their Uncle Murray. Murray owns an antiques store, though this is partly a front for his search of cursed relics. When players arrive, they learn that Murray has gone on another relic hunt, and is now missing. Hoping to find their missing uncle, the player embark on a hunt of their own across Ocean City. 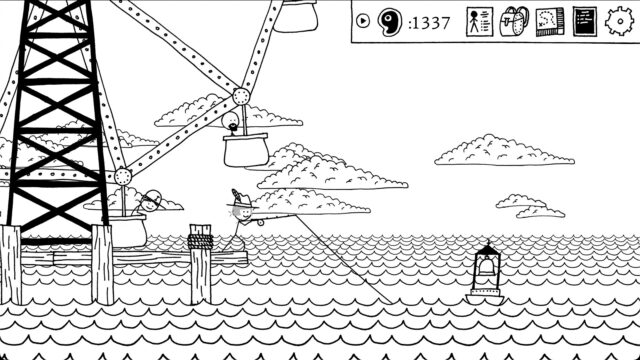 The most important modern RPG feature is present and accounted for.

Although there is a continued thread that runs through everything, this is largely a setup for amusing and/or spooky hijinks to ensue. The overall plot is largely by-the-by; it’s a straightforward cycle of finding the plot device while its couple of antagonists try to build up a somewhat nebulous threat, without really getting enough characterisation to offer much interest in method of motive. There are multiple ways the final encounter can end, primarily dependent on what side content has been completed.

Nevertheless, the plot does the job of getting players to where the game’s fun really lies: exploring all of the weirdness Ocean City has to offer. Each of the game’s chapters primarily takes players into its own dedicated map, though some puzzles will require players revisit past areas or wait for a future area to complete. Here, they can find all sorts of distinct puzzles and challenges both small, like finding crystals so that Crystal can open her store, and large, such as solving all the mysteries behind the Sandwich witch trials. The writing throughout is excellent, often playing off or commenting on the setting’s strangeness and the various impracticalities of things that the video game medium allows itself to ignore. Though the actual finale ends up being a bit damp, the entertainment value the side content brings ensures the overall experience ends on a highly satisfactory note. 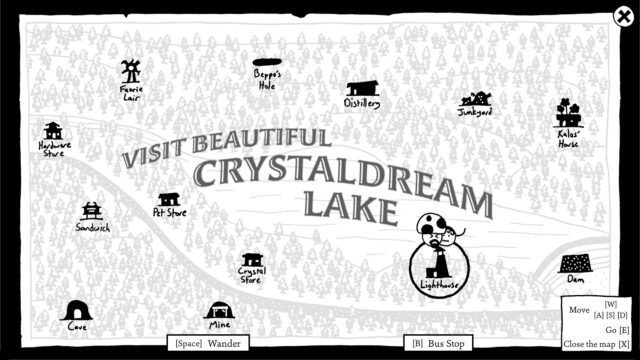 Crystaldream Lake has some of the game’s most interesting puzzles.

Puzzle solving is an important element, and the game has a good selection. Its second chapter is particularly noteworthy for its use of time-travel, and is probably the game’s strongest section because of it. Part of the puzzle solving process involves managing the character build and stats. These stats are affected by a wide mixture of temporary buffs such as potions, food, and equipment, and permanent skill upgrades obtained by spending experience points in lieu of an outright level system, so holding onto a wide variety of items plays into players’ hands if they want to explore fully without going back and forth. However, while it’s to the player’s advantage to collect as much as possible, trying to sort through it all in the UI can be a bit fiddly; the game gives players the all options needed to do it, but it’s easy to get lost or press the wrong button.

Shadows Over Loathing’s turn-based combat is very similar to that of West of Loathing. Players are joined by a companion and a pet against up to nine enemies, though most commonly around three. On each turn, players can use an item and spend Action Points to use learned abilities and spells, before ending their turn with a regular action that ends their turn. Combat can be challenging at times when players come across particularly hard-hitting enemies, but there are more than enough ways for players to overcome it. Those who pay attention to their stats, equipment, and skills will be able to create a strong character build without much trouble, but there is always the option to change the difficulty mid-game. Defeat simply puts players back where they were before the fight started, with some defeats even providing a useful temporary effect. 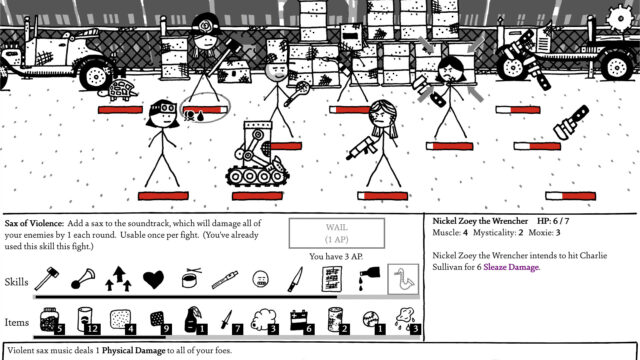 One of the busier battlefields.

The stick-figure art style works well alongside Shadows Over Loathing’s approach to humour and the bizarre. There is appreciable attention to detail and on providing little touches, while the smooth animations do an excellent job bringing it to life. Despite the simple black-and-white palette, the different locations are distinct, but the game certainly isn’t afraid to go silly, particularly with different shoes giving players bizarre ways of getting around. The music is also very catchy, with a good mixture of jauntiness and eeriness fitting with the genre and setting.

Shadows Over Loathing very much picks up where West of Loathing left off. The two games have a very similar appeal, focusing on fun first and foremost but providing plenty of depth in their puzzles and exploration to ensure players are well engaged throughout. Exploring Ocean City offers plenty of rewards for players, be it satisfaction from solving a tough puzzle or challenge, or simply a good chuckle at the strange goings on.