Shadowrun: Dragonfall – Director’s Cut burst from 2013’s Shadowrun Returns like a blood-and-titanium phoenix. Harebrained Schemes’ first Shadowrun game is an excellent turn-based tactical RPG whose strengths are offset with awkward save mechanics and limited team customization. It was followed by Shadowrun Returns: Dragonfall, which replaced many of the parent game’s human failings with polished chrome. The director’s cut is the pinnacle of this evolutionary leg. It’s hard-wired with enough features to run like a top-of-the-line pleasure rig, free of any unsightly Essence loss or dumpshock. Dragonfall – Director’s Cut is a great game packed with pathos, atmosphere, heists, and intrigue.

Dragonfall takes place in magical cyberpunk Berlin, home of countless free-states, gangs, and corporate interests. Like all good Shadowrun stories, the inital run is a rabbit hole into something far more complex. In this case, a simple burglary explodes into a conspiracy wrapped in fire, scales, scientific hubris, and the worst kind of cyber-stalker. On a more personal level Dragonfall revolves around the Kreuzbasar, an autonomous neighborhood in the midst of Berlin’s urban chaos. The Kreuzbasar is more than a hideout and a resting place for the central crew of shadowrunners. It’s a community to build, protect, or exploit. Visiting its inhabitants and getting involved in its dramas are welcome contrasts to excursions to the outside world. The residents of the kreuz are a persistent group, who scratch the same itch as maintaining a castle in Suikoden or a Breath of Fire town. Checking in on their lives deepens the world, develops a strong sense of place, and provides ample sidequest fodder.

Since the protagonist’s personality and skills are based on the player’s choices, the narrative heavy lifting is mainly handled by the Kreuzbasar’s core team of shadowrunners. It’s beyond risky to go alone on a run, so teaming up with a crew of dangerous, flawed criminals is the way to go. Glory, a frosty medic loaded down with vintage cyberware, and Dietrich, an aging punk rock shaman, are standout voices who exemplify and complicate familiar cyberpunk themes of dehumanizing technology and rebellion. Each team member’s personality shines through in the moral choices made during missions. Earning their trust requires sharp situational awareness. Proving your leadership to your teammates adds an extra layer of complexity to each moral decisions. Even if you think you’re taking the right (or most profitable) course, it may not be worth breaking a contract if uncompromising Eiger’s around.

The core runners are supplemented with a handful of specialists who can be hired for individual runs. However, they’re generally not worth it since they demand payment up front and don’t have the strong advancement abilities of the core crew. After every major run, the core team of runners gains several pre-determined skills. They also gain one of two advances, each keyed toward a different facet of their build. Eiger, the troll combat specialist, has different specs as a shotgun surgeon than as a sniper, although she’s a ferocious beast either way. Some advancements provide bonus gear for the core runners, which repopulates after every mission. Grenades and medkits add up over time, so securing a renewable source of consumables is a worthwhile investment. 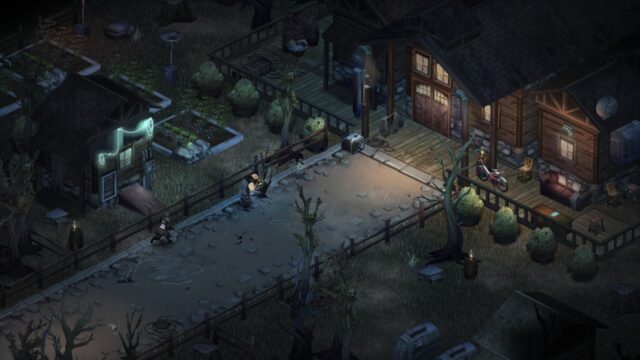 Not every run takes place in the city. Bring your slicker.

Normal combat is a turn-based affair. Each character has Action Points (AP), which govern how many actions they can take. Movement, normal attacks, spells, spirit-summoning, and fancy cyberware all require AP. Complex actions like reloading a grenade launcher or casting specialized spells require multiple AP. Positioning is very important because of Dragonfall‘s cover system. Hiding behind the scenery provides cover, which reduces the chance to get hit. Armor, on the other hand, prevents damage. Anyone who ends a turn in the no man’s land of a bare foyer had better have a backup plan. Enemies use cover wisely, encouraging the player to tactically reposition or discover other techniques for bypassing cover. Magical or technological bombardmant are possible, but it’s more fun to send a remote controlled drone through the air ducts or flank with a summoned abomination.

Despite the different ways a crew of shadowrunners can be organized, the scenario design is forgiving enough to allow for experimentation. While some character builds are more universally useful than others, no team is able to do everything in a single playthrough. This abundance of options provides freedom to explore a specific path without feeling like useful resources are irretrievably lost. If a team lacks the requisite skills to do something neat, it will probably have the skills to access something else worthwhile. Harebrained Schemes should be commended for this balancing act: it’s difficult to put together a terrible team, but team design still has real consequences.

Matrix combat isn’t as fun as its non-virtual twin, since it rarely offers as many options. However, it’s still enjoyable for how it emulates cinematic hacking. Deckers get several turns in virtual reality for each outside turn, so their allies in meatspace have to protect them “just a little bit longer” while bullets fly and the heavens shake. At that point, the brave decker is able to unlock the blast doors, snag the vital information, or take control of the hordes of combat drones causing their allies so much grief. The decker’s success is the startling punctuation in the blood-grammar of battle. It marks a surprise turnaround of blaring trumpets and jubilation.

Every departure from the relative safety of the Kreuzbasar is a mission. Although it would be easy to see each mission as a traditional fantasy dungeon with go-go dancers and air ducts, the mission variety is morally nuanced and shaded with surprising twists. Most of the missions involve breaking into a building and shooting some dudes, but each one is laced with enjoyable twists, both narrative and tactical. For example, a routine smash-and-grab is no problem until it turns out the client forgot to inform the party that their package is alive. NPCs further complicate missions. The office buildings, science complexes, and city streets traversed by shadowrunners are also places of business and everyday existence. Even the stealthiest team will occasionally encounter a janitor, office romance, or quirky personality who threatens to disrupt the integrity of a mission–or provides unexpected aid if everyone plays their cards right. 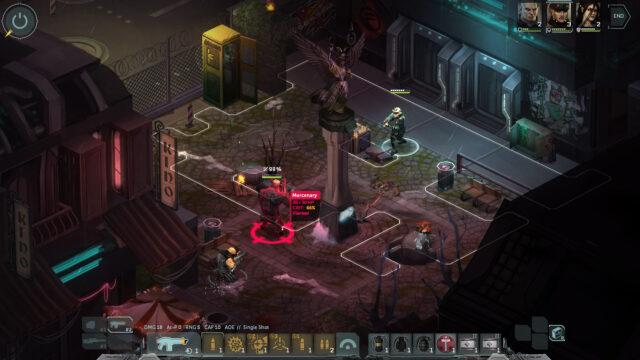 The five new missions introduced in the director’s cut stand out as excellent examples of what makes the game so great. Three of them are partner runs keyed to individual teammates. These sidequests draw back the curtain to explore what really makes already nuanced characters tick. Guiding your allies through their crisis points does double-duty; while they grow, their moral quandaries work as foils for defining the malleable protagonist. Because the main character can potentially take so many shapes or builds, these personal missions turn the screws and force tough decisions. Is it worth allowing evil to escape if it saves innocents? Is it worth solving a dangerous injustice if its institutional causes are unassailable? Taking sides with Berlin’s factions is inevitable, and rarely consequence free. Completing each mission also provides a mechanical power-up to its focal character. Entertaining stories are worth getting up for in the morning, but entertaining stories backed with mechanics for self-actualization are even better.

The other two new missions are further examples of the sublime torment of decision-making. Both ask the player (or, for those better at disassociating from their out-of-game ego than this reviewer, the character) how far is it worth going for money–or how much money is at the tipping point. Unlike many games interested in morality and choice, Dragonfall rarely offers a good option and an evil one. Instead, it presents a bad choice and a terrible one. Hacking into computers, gathering information, and careful planning can uncover information to clarify these choices, but even so it’s often uncertain which choices will end up better for you, your allies, the world, or your bank account. This uncertainty is a feature rather than an exasperated surrender to subjectivity. Everyone in Berlin has an angle, whether it’s salvaging a crumbling biotech franchise or trying to escape from a web of blackmail. You can’t save everyone, but your choices will change the world.

Although the writing could carry the atmosphere by itself, the graphics and sound team up to further enhance the dirty, haunting paranoia. The music is generally subdued techno, well-suited for vigilant sneaking or meeting with seedy characters. When the guns come out, it amps up into pulse-pounding beats that add tension and immediacy in spite of the turn-based combat system. The grimy characters and strong lighting dynamics echo the soundtrack’s vigor. Areas have enough background elements to look lived-in and decayed, but still house sparks of life and individuality. Berlin’s neighborhoods display a variety of architecture and themes; its residents are similarly diverse in their portraits and designs. Living in the world of Dragonfall wouldn’t be especially pleasant, but it’s believable.

Shadowrun: Dragonfall – Director’s Cut welcomes multiple replays. A single playthrough is a rewarding experience, but the world is rich enough that further exploration is strongly recommended. Fielding different runners and making different decisions allows more thorough exploration of the scenario design and potential character loadouts. A single playthrough of most of the side content requires around 30 hours, but the save system aids further exploration for those who just want to collect multiple endings. Each save is threaded, allowing for easy navigation of the different choices along each branch. User-generated campaigns provide additional avenues of exploration. Dragonfall is worth any RPG fan’s time and $15 unless, I don’t know, they don’t like cyberpunk, dragons, or exceptional tactical combat.