Yarr mateys, the seas be full of monster girls! If ye be brave enough to sail these choppy waters, expect Seven Pirates H to deliver plenty of adult-oriented entertainment, with a progression system tied to bust size and attributes, buttressed by a surprisingly robust combat system and a cute storyline, all packed into a relatively well-paced tale with just a few frustrating elements threatening to capsize the whole ship.

Seven Pirates H is thoroughly a fan service game, with the Chest Growth system dictating the battle prowess of pirates and how they are visually represented in story scenes and in combat.  The more voluptuous a monster girl’s chest is, and how long it stays that way, the more attack power each will accrue; conversely, keeping a party member’s cup size small will increase her agility.  Other breast attributes such as perkiness, firmness, height, cleavage, and softness tie into HP growth and defence.  Extracts, used to change the attributes of a pirate, are earned by battling with h-monsters in dungeons, found while exploring, or by completing quests; using certain motions on the Switch touch screen, or specific button prompts, will increase or decrease each stat.  As each stat category rises and falls, a variety of skills can be unlocked for use in combat. 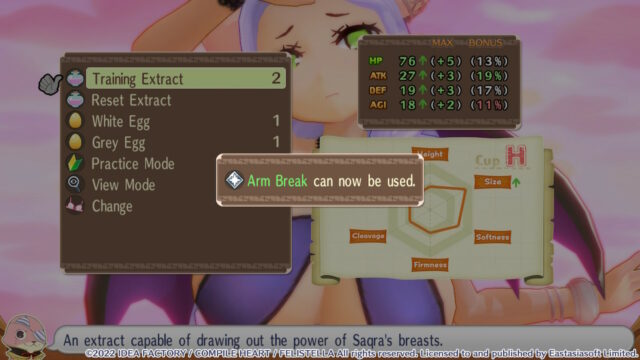 Boobie Training not only increases stats but can unlock skills.

Departing from the first-person 2D dungeon-crawling found in Moero Chronicles and Moero Crystal, which focuses primarily on random encounters, players will instead spend the majority of their time in Seven Pirates H diving into short 3D dungeons, which include visible enemies.  These dungeons are much shorter than those found in the previous two games, which means each area has fast pacing, though the player will still need to proceed with caution, as jumping into the next boss without adequately exploring each small dungeon will lead players to be drastically under-levelled and under-geared.

Enemies come in a variety of sizes, with even the same enemy having a normal, a small, and a large version, which deal variable damage and drop different amounts of gold and materials.  Rare enemy drops can often only be acquired under special conditions, such as being defeated by an excited or aroused party member; a pirate’s MP dictates her current status, and she will become excited once it rises above 100, boosting her stats, and aroused once her MP is full at 200.  Skills, which do more damage than regular attacks, cost MP, and players will need to decide when to save up for stat boosts and bigger moves, especially in longer boss fights.  Some bosses can only be defeated using the special Otton Cannon move, which must be charged up over a number of turns. 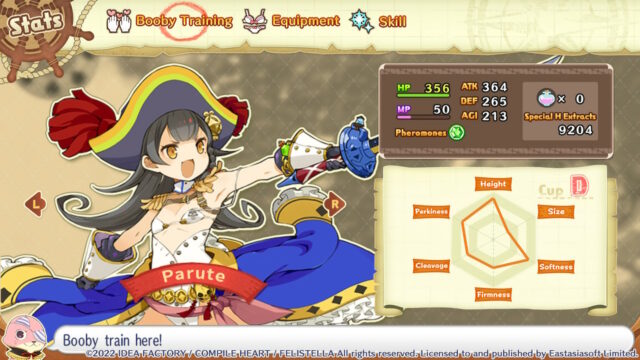 Parute’s default pheromone is green, though buffs can temporarily alter this.

There’s plenty to explore across the seas besides dungeons, with tiny adventurers called Boobie Kin hidden around every corner.  These are divided into three categories: Pirate Boobie Kin unlock new combat skills, Merchant Boobie Kin unlock new items to purchase and equipment to craft, and Scholar Boobie Kin unlock additional hints for hidden secrets and additional requests to complete.  Requests will generally call for items dropped by enemies or gathered inside the dungeons, though at some points in the story the narrative is gated by rare drops that can only be acquired by defeating enemies with excited or aroused skills, or that are only found rarely at gathering points, which considerably slows down progression and can be a little frustrating.

Crafting is an integral part of equipping the pirates, and each monster girl can have one bra and one panties; bras focus on bestowing specific skills, while panties focus on buffing stats.  Some bras and panties can be worn by any party member, while others are exclusive to a specific pirate.  Both bras and panties can be found or purchased, but the best gear is crafted from enemy drops and gathering points inside the various dungeons.  Enemies can also drop eggs, which can be opened with a short mini-game involving squashing them with one of the pirate’s breasts, and often include rare crucial materials.

The game’s story unsurprisingly focuses on seven pirates who sail the Monsupi Seas, which are devoid of any humans save Parute, but filled to the brim with both monster girls and h-monsters, who wantonly attack the pirates.  Compared to previous games in the series, which had dozens of monster girls to recruit, winnowing the party down to only seven protagonists allows for a more focused narrative centred around the active party.  Unfortunately, the localization is somewhat middling, often with phrasing that just feels slightly wrong or out of place, which doesn’t ruin the experience entirely, but does take players out of the fantasy of the universe. 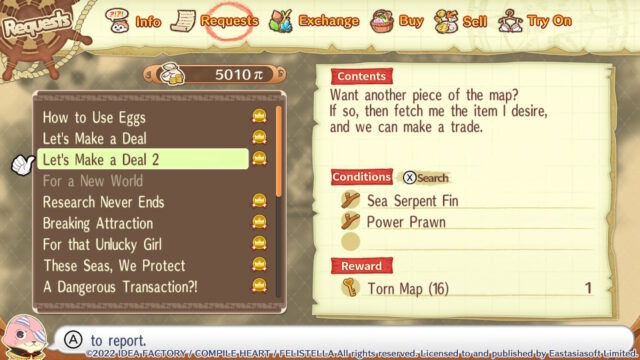 Small but frequent localization errors, including missing pluralization and incorrect punctuation, are noticeable.

When not exploring the high seas or a dungeon, players will need to navigate a variety of menus to ensure their girls are in tip-top shape, requests are being fulfilled.  Thankfully, though there’s a fairly large number of menus to flip through, they are all are easy to navigate.  The game’s sound effects are, like much of the game, not taking themselves particularly seriously, and most have a hilariously sexual bent to them that goes just enough towards humourous without making them outright obnoxious.  Unfortunately, the same cannot be said for the game’s music, which is rather limited, and quickly becomes repetitive.

Though it departs from the previous two games in the series, Seven Pirates H still manages to carve out its own niche in the adult-minded gaming space.  While the differences between past games and this one may seem jarring at first, overall many of the gameplay tweaks come as welcome changes. Just consider whether it’s worth trying to explain the Chest Growth system to your seatmate on that next plane ride.