The Rise and Fall of Sir Taco XX, the Useless Knight

496 legacies, five intense boss battles, and a woman scorned, determined, and finally satisfied. Cellar Door Games’ roguelike Rogue Legacy is a game that will make you angry. It will frustrate the hell out of you, but it’s a game that makes you keep coming back for more. I admit that roguelikes are generally not a genre I enjoy, so to become such a glutton for punishment means Rogue Legacy left a huge impression on me.

Rogue Legacy tells the story of a traitor who has wounded a king, with a family’s honor at stake to restore its former glory. Told through journals found through exploring the cursed Castle Hamson, players are only given snippets as to the true nature of the overall story. Although it’s about a sick king and a family seeking a cure for his illness, the hero comes to realize that there’s more to the situation than what is let on. The problem with this style of storytelling is players may not find every journal entry, as the dungeons are randomized with a variety of floor patterns and gimmicks. The story is definitely humorous and a lot of fun providing one can find all the journal entries, but it’s not at all the main draw of Rogue Legacy.

As a roguelike, one of the biggest traits is difficulty and Rogue Legacy has that in spades. The gameplay is a sidescrolling action-platformer, wherein the hero will hack n’ slash his way through a randomized dungeon, spelunking through four main areas to slay four challenging bosses to open a golden door at the front of Castle Hamson. Each area is randomized to have spike pits, floating enemies, hordes, minibosses, disappearing platforms, and even secret areas that can only be uncovered with certain traits attached. Players first begin with a useless knight at level one, and once he dies, are then treated to three potential offspring, each with their own traits, weaknesses, and class. Part of what keeps Rogue Legacy fresh is the fact that the traits can help or hinder the hero through the exploration process, as some characters can have I.B.S, dwarfism, be far or near sighted, or have a severe case of vertigo, and the list simply goes on. Paying attention to the types of traits an offspring has is critical to success in Rogue Legacy because it often makes the difference between a slow or fast death. 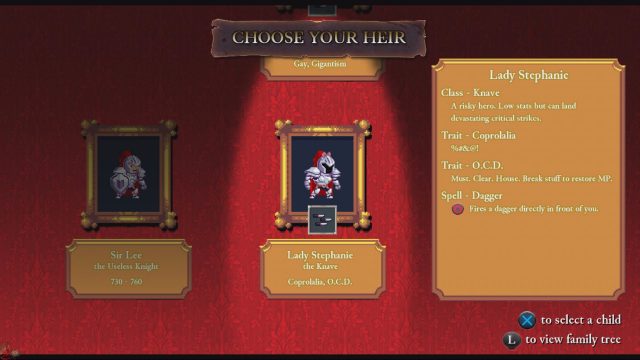 Must. Break. All. The. Things.

Class type is also an important factor to consider when selecting an offspring. Some classes are built specifically for looting but have low stats; some are tanks with tons of HP and MP. Every class, regardless of the randomized traits, comes with a magic skill that can be used to push enemies back in addition to the usual strategy of jumping around and whacking the dudes. What makes this battle system engaging is its simplicity, because often the trait, be it positive or negative, adds that extra bit of excitement to the mix, so the hero will always have something different to deal with in each round of exploration. The more times the hero dies, the more rewarding the game often feels: death is almost always fair, causing one to rethink how he might approach certain enemies and bosses. Rogue Legacy is a game that tests patience, and rushing through areas can often have drawbacks, or be the ultimate success depending on how offensive or defensive the approach is.

Succeeding in Rogue Legacy boils down to how much gold, runes and blueprints a player can harvest during a dungeon run. Each chest is randomized with either gold, a stat boost, or a blueprint for new equipment. Once a hero is killed in battle, his offspring inherits his gold and items, which are sent to the manor. The manor allows players to use gold to upgrade skills, thereby leveling the next hero up before he makes his next dungeon run. After upgrading a skill, the price increases. Equipment is also an easy way to keep players well suited for dungeon runs, and is often the cheaper solution than upgrading skills, but the downfall comes from whether or not one has blueprints to create the item. There is a third type of a chest, though it’s a bit problematic. Fairy chests contain magic runes, but in order to obtain the item an objective or puzzle must be cleared. Sometimes the objectives are as simple as “kill all enemies” or “don’t take damage,” but the problem with these chests often lies in the randomized dungeon. It’s not always easy or obvious as to how one can succeed in these sections, and sometimes the reward isn’t worth the painstaking amount of frustration. For example, a room with vertical planks that snap shut in a room full of spikes isn’t easy to navigate and it’s even harder to anticipate what could even be in the area beyond what is visible to the player. It really is a luck of the draw situation, but there are numerous occasions where it’s not easy to tell what is expected of the player when entering one of these special rooms. Most of the time these rooms aren’t particularly fun to engage in, even if the rune reward is worth it.

What is worth it is the game’s soundtrack, which is so catchy and fits the overall atmosphere of what Cellar Door Games is attempting to capture with this world. Castle Hamson’s theme is one that will grate after a while, if for the sole fact that this is the one area players will have to always walk through to get somewhere else. Finding a randomly placed jukebox is fantastic because players can select whatever music they wish to listen to as they traverse the dungeons, and there’s more variety than the game lets on initially. Rogue Legacy also sports a wonderful retro appeal, and Cellar Door Games takes extra steps to enhance the visuals for the various side effects and traits that players may encounter. For example, having a sepia tone for when a character has the trait “nostalgic.” These little enhancements just add to the overall experience making it obvious that this game was crafted with a lot of love and care.

However, this game really is made for those who are gluttons for punishment. Players will die repeatedly, and it’s not always an easy pill to swallow. Boss battles in this game are really thoughtfully designed, but are so aggravating that one has to question if repeated deaths are entirely fair or not. Each area within the game has a target level that the hero should be around before attempting, and the difficulty for each boss has a gradual increase much like the areas. However the difficulty takes a huge leap from fighting Alexander, the second boss in the Forest, to Ponce de Leon, the third boss in the Maya area, and regardless of how much one grinds, the added obstacles in those fights are often what kills the player as opposed to the boss itself. Thankfully, after a death, the hero can enlist the help of the architect who for a small cut of future earnings can lock down the castle’s pattern, removing the radomization, so that players can fight the bosses repeatedly without having to traverse through the dungeons from the beginning. Still, having to repeatedy lock down the castle means less gold to boost stats and equipment, but it means being able to attempt the boss without much hassle. Let’s face it, defeating these tough bosses in Rogue Legacy is insanely rewarding and something worth celebrating. Fighting them over and over again? Not so much.

There’s no denying that Rogue Legacy is a challenging and repetitive game. Those who do not like repetition to the nth degree or a balls-hard challenge should stay away from this game. Far away. However, it’s such a rewarding experience for those who stick with the game and keep persevering. Sometimes the most rewarding experiences in life are also the ones that teach the harshest lessons, which is exactly what Rogue Legacy succeeds at. The game is addictive and and merciless, and that is what will draw players in to keep dying and retrying until they prosper. Rogue Legacy has the power to take people out of their comfort zones and give them an experience that is as refreshing as it is challenging. Rogue Legacy is triumphant in creating an accessible roguelike that anyone can pick up and play, and it does this almost effortlessly. 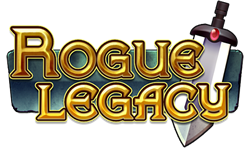