They Can’t All Be Heroes

Some may do a heroic deed for fame or glory. Others would do it because it’s the right thing to do. And then there are those people who honestly don’t give a damn, and would rather be on the first wagon out of town. Such is the case of one Mr. William Roehm, who has the misfortune of being right in the middle of the action in Quest for Infamy: Who Needs a Hero Anyway?

Roehm’s story begins simply enough. After getting caught in the wrong place at the wrong time with the wrong nobleman’s nubile daughter, he’s found plenty of reason to head west until there’s no one left to chase him. Unfortunately, his flight is grounded in the valley of Krasna, where unseasonable floods have wrecked the bridge north, leaving the area to stew in strange plots. Before long, Roehm has to choose a vocation (Bandit, Sorceror, or Thief), hunt for maguffins, and survive being the fall guy, all the while continuing his mantra of “I just want to leave this stinking valley!”

In fact, one scene in particular encapsulates the essence of this game. Roehm has a secret meeting with a buxom sorceress, who tasks him with retrieving the four lost pieces of the item that leads to the great maguffin. His natural reaction is, “To hell with that! Are you daft? Why should I stick my neck out?” To which she replies that 1) she’s willing to pay him handsomely, 2) it’s the only way he would have any chance with her, and 3) she’s quite ready to send this wanted poster with his face on it to the sheriff if he says no. Bribery, seduction, blackmail; these are the main constants in a story that deserves its title. 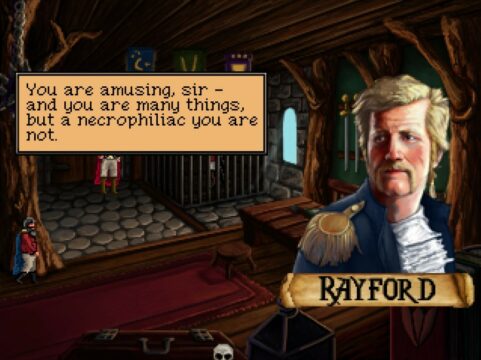 There are in fact things that Roehm will not do.

Quest for Infamy is very obviously derived from the Quest for Glory series, and includes the basic class divisions — albeit with their own twists. The first half of the game varies widely depending on which class Roehm chooses after the prologue. The Brigand has to steal horses and rob traveling merchants at swordpoint, while the Thief gets to take the sneakier approach and burgle half the houses in two towns. The Sorcerer mainly needs to gather all the esoteric materials needed to learn new spells — and incidentally commit arson, theft, and vandalism along the way. In the general course of the adventure, there are multiple means of getting through obstacles, often of equally questionable morality. As just one example, the main road into the southern forest is blocked by some uncouth huntsmen who will attack, but only if Roehm provokes them. As a brigand, he could just deliver a beatdown. As a sorcerer, he would have knowledge of a spell of terror so refined that it will make them crap their pants. But as a sneaky thief, the best way is perhaps to head over to the port and hire some young ladies from the local house of negotiable virtue to entertain those lonely huntsmen for a while.

The biggest difference between this game and the QfG series (aside from the tone) is the way it handles stats. Everything physical about Roehm is set in stone, and most parameters don’t even appear on the character sheet. Hit points change only once, and that’s based on what class is chosen. Instead, the player focuses on a small set of skills, which with the exception of magic are actually available to all classes. However, it is difficult to increase one’s ability at theft without actually being a thief, and brigands are definitely more proficient with the swordfighting skills (Accuracy, Slash, Stab, Bash, Block). However, for the most part there is little need to worry about character builds. 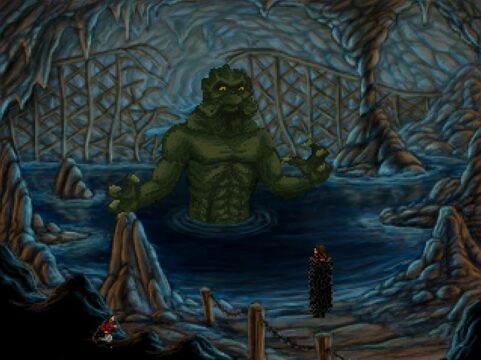 To quote the narrator: Oh. Crap.

Combat most resembles that of Quest for Glory IV, but mainly because it’s done on a side-view. The game actually works with a hidden active-time battle mechanic, where the player has to choose an action within a three-second window or else the enemy will attack ahead of turn. The game has neither MP nor a stamina gauge to limit the player’s options, but Roehm’s spells and other special tricks have a charge timer which fills independently of the hidden ATB gauge. One helpful addition is that successfully blocking enemy attacks will recover a bit of health.

Enemies are usually visible on screen for a short period before battle is inevitable, giving Roehm a window of opportunity to either flee in the other direction or make use of a spell or item to scare the monster off. Despite an interesting array of adversaries, battles tend to follow the same pattern throughout the game, differing mainly in the enemy hit point totals. There is unfortunately no way to cleverly defeat the handful of boss encounters aside from straight-up fighting.

The graphics in this game are an oddly mixed bag. On the one hand, the backgrounds and locales are beautifully rendered in SVGA style, and look at least as good as anything the QfG games brought to the table. On the other, the character portraits range from the fully illustrated to the very obviously photoshopped. The latter includes most of the characters in the game, who are portrayed by photographs in various stages of recolorization and editing, and their mouth motions bring to mind ventriloquist dummies. Aside from clashing with the background a lot, several of the female portraits were obviously chosen for the cheesecake factor. While there’s nothing wrong with that (and it fits the game’s theme to a double-dee), character portraits should on some level elicit an admiration for the artist’s work, and not curiosity as to which issue of Playboy might have contributed material. 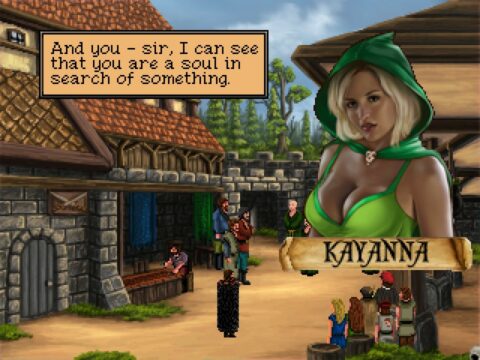 Two guesses what that thing is, folks!

The sound quality is also a bit mixed, with a smorgasbord of accents all crammed into one small valley. A small number of NPCs sound like they were recorded from the bottom of a well, though most of the cast avoids that issue. That aside, the actual acting is quite good. Yes, there’s a whole lot of ham and cheese throughout, but that is as much a facet of the game’s style and tone as everything else in the game. To be honest, the voice acting is leagues better than one might expect of a production where the voice acting cast list matches up almost ninety percent with the programming staff list. It’s obvious that everyone had a really good time with this, and that enthusiasm lifts the performance higher than it might otherwise go. As an aside, the guy who does Roehm gets extra props for being able to pronounce all the magic spell incantations, which appear to be some form of bastardized Erse Gaelic.

Quest for Infamy appears at first glance to be a simple inversion job, taking a core element of the Quest for Glory series’ tone and taking it into bizarro territory. What the player gets is a well done anti-hero plot, with the most honestly anti-heroic character possible. The story is over the top at times (a lot of times), but Roehm himself is believable as the hapless pawn who’s forced to fight back. For those who enjoy the adventure RPG style and feel like being uncouth, this would be a most enjoyable adventure.