What was supposed to be a graceful leap from mouse and keyboard controls to console is more of a disjointed belly flop.

Previously a domain left for PC players, the point-and-click genre has been slowly trickling over to consoles as the years go by, with mixed success.  Quest for Infamy, a spiritual successor to the long-running Quest for Glory series, is one of several attempts to introduce the genre to Nintendo Switch players. However, this is one of those games that probably should have stayed where it was strongest.

Main character Roehm is a delightful scamp who has landed in a backwater village, where intrigue, secrets, and even cults flourish alongside seasonal flooding, the convenient plot premise which keeps him in the area.  By far, the story and dialogue in Quest for Infamy are its strongest aspects; it’s witty, loaded with plenty of zingers, and gives the people in the village real liveliness.  There’s also a narrator to push along the plot, who doles out excellent one-liners.  Unfortunately, despite the console port being the perfect opportunity to fix the game’s atrocious voice acting, nothing appears changed.  While Roehm’s voice actor is absolutely spot on, most other dialogs are difficult to understand and voiced by people who seem to be inside of a tin can, entrenched in an echo chamber, too far from their microphone, or some unfortunate combination of the all of them.

Quest for Infamy also does an excellent job of encouraging exploration and wandering the world.  Despite the story-driven geographical limitations, it provides an interesting tableau of locations and NPCs to interact with.  Furthermore, many problems, for both the main quest and optional content, have multiple solutions, further driving home that poking around into every nook and cranny, and taking creative leaps of logic, is regularly rewarded.

Combat in the game is simple: during the opening of the game, Roehm sets out to survive the locals’ oddities by pursuing the path of a thief, sorcerer, or brigand, which will directly affect how challenging the game becomes in future chapters.  The sneaky thief by far is the safest route, as it is largely about words and sneak attacks rather than direct combat, while the sorcerer, who must train their magic, takes the most amount of time and effort to master, with the brigand role of smashing in as many heads as needed sits between the two.  The biggest flaw of the turn-based system is an artificial sense of urgency — during combat, the player must select their next move within a few seconds or forfeit their turn.  Furthermore, Roehm is amusingly bad at doing any sort of fighting, and players will need to practice stabbing things in the face or risk constantly missing while their skills improve.  This generally leads to hurriedly selecting a single move and performing it over and over to ensure the highest levels of accuracy, making combat repetitive as time progresses. 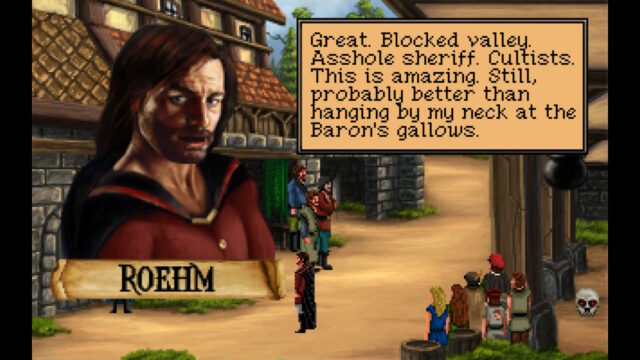 Roehm’s way with words can put him into, or keep him out of, trouble.

It’s truly unfortunate the Switch version of the game is at best ham-fisted, failing to adapt to its new home as well as fixing issues inherent to the title. For those who wish to play Quest for Infamy, we recommend trying out the title on PC.  A full review of that version can be found here.