A Brew of Bugs

The slice-of-life genre was, once upon a time, almost exclusively comprised of farming games.  Nowadays, with numerous indie developers looking to make cozy titles, the genre has blossomed to represent a variety of gameplay mechanics, including those found in RPGs.  Potion Permit builds upon this ever-growing library of low-stakes titles by adding in both potion-making as well as light RPG mechanics to mix up a new type of game.  Though a bevy of bugs at the time of launch holds the title back, there’s plenty of engaging gameplay to be found, wrapped in an adorable pixel art presentation, if players are willing to overlook or be patient with the technical issues.

The game opens with the player heading to the island of Moonbury. Years ago, after numerous mishaps with chemists, the islanders threw the Medical Association out of town and currently rely on the local witch doctors to cure townspeople of their ailments.  However, when the mayor’s daughter becomes deathly ill, the chemists are given a second chance.  The story isn’t particularly deep, revolving around solving the physical ailments of a small number of people, along with helping them solve interpersonal issues, but it’s cute and does an adequate job.  Other issues are present; some quests that help players improve their relationships with the residents of the little town have incorrect or misleading instructions, others may have technical issues like missing dialogue, and a few can generate soft lock issues. It’s certainly a case where patches can help greatly improve the story’s flow.

Light romance interactions are also available for those who wish to pursue them, though these are kept strictly optional and must be opted into with a special item. The player can date as many of the six romance options as desired, and the gender of the main character does not seem to affect who is available.  However, dating is extremely limited in its scope, and those seeking a romance-centric experience should look elsewhere.  The game’s narrative blessedly dodges a lot of character tropes found in far too many slice-of-life titles, and it’s easy to find the townspeople, including romance options, positively delightful, though dates frequently soft-locking near the end are much less endearing.  The graphical design of the various characters make each feel unique and the cute visuals, particularly during story cutscenes, make the world feel alive and lived in. 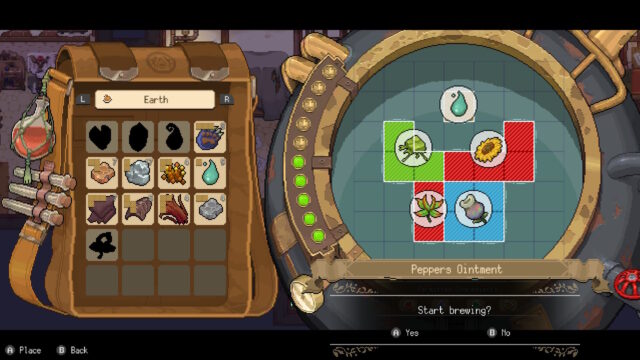 Ingredients slot into a grid to complete each potion recipe.

Players will spend the majority of their time in potion-making to ensure any townsfolk feeling under the weather perk right up.  Due to the past mistakes made by the Medical Association, Moonbury only has a limited amount of trust in the chemist, and failing to cure patients in a timely manner will affect how the town feels as a whole about the newcomer in its midst, which may lock out progression through the story until their reputation is repaired.  The game opens with the player knowing a limited number of recipes, which can be increased both by taking Medical Association tests and improving the local clinic.  Diagnosing a patient revolves around short and simple memory or timing-based mini-games, while ingredients must be must be foraged from around the island, either by felling trees, mining rocks, harvesting plants, or dug up by the chemist’s trusty hound who accompanies the protagonist throughout the game.

Brewing potions is a central part of daily life for the chemist, and despite it taking the form of a fairly simple puzzle, it ends up staying engaging throughout the game.  Each potion is represented by a grid of squares which must be filled with Tetris-like pieces, each representing ingredients that the player has harvested in the wild.  This grid must be filled precisely, and overlapping ingredients are not permitted.  As the player improves their potion cauldron, more pieces can be used, encouraging a variety of brewing methods.  Once a potion is created at least five times, recipes can be saved for quick repetition; this is especially handy for more complex potions that have fewer potential variants and which players will frequently brew for precious gold.

Combat is simple but adequate; enemies come in a variety of shapes and sizes, with some species being aggressive and others being considerably more complacent, sometimes not even responding to being attacked.  Like all other aspects of the game, enemies can be pretty buggy, not only having strangely sized hitboxes, but also able to walk into terrain that cannot be navigated by the by players, which often puts ranged enemies in places where they can’t be hit.  All three tools used to accrue materials — axe, hammer, and sickle — can readily double as weapons. Some enemies have heavy carapaces, which must be shattered with a hammer, or shields which must be destroyed with an axe; these enemies are noted with a special icon above their heads, so players don’t need to memorize which ones have these extra defences.  All enemies drop some form of materials, though these drops are annoyingly not guaranteed.  Weekly requests from the Moonbury town hall may ask for monster materials, and these are a handy way to supplement the meager amount of gold the chemist accrues through treating patients. 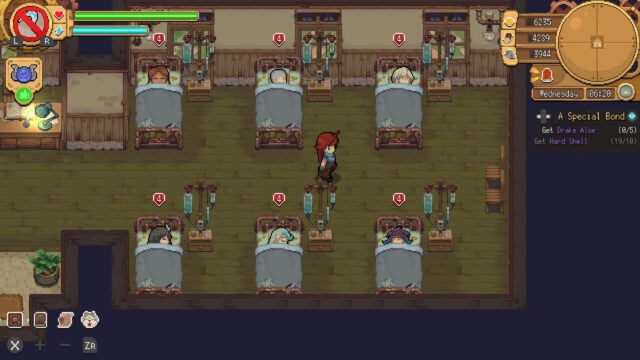 Up to six patients can be cared for at the clinic, though typically only one is sick.

As the game’s story progresses, shops begin to offer a number of upgrades, including both improved tools and the facilities the chemist uses, which require considerable investment, and accruing the needed supplies and gold will comprise a notable amount of the player’s time.  While stone and lumber become plentiful, especially as new areas in the Moonbury wilds open up through the game’s story, gold is a precious resource, and the player will never have enough of it.  Expanding the chemist’s house will unlock cooking, an integral component in longer explorations.  The player’s energy can never be upgraded, and harvesting more complex materials takes a lot of it; refilling this meter can only be done by resting at the bathhouse (which closes in the mid-afternoon), sleeping for the day (the only way to save), or via food cooked in the kitchen or purchased at the bar.

For those with plenty of patience, fishing can also be unlocked; and again, it’s currently fairly buggy.  At first, the simplest rod will only be able to catch fish at the lower-tier dock, but by improving relationships with the townspeople players can acquire increasingly durable rods.  Fishing provides unique cooking ingredients that cannot be found any other way, and fish recipes often restore a greater amount of energy than simpler cooking recipes.  However, due to the extended time each fishing cast takes, players must also tolerate the middling sound design that includes little inspiring music and easy-to-forget sound effects.

Potion Permit is the kind of game that could be fantastic, if it wasn’t currently plagued with numerous bugs.  For those willing to commit the fifteen to twenty hours to enjoy the content despite the mountain of technical issues, or those willing to wait for a few patches to iron out the current issues, there’s a quaint title waiting to be explored. Underneath the teleportation issues, combat problems, dialog flubs, incorrect quest text, and soft locks is a game that has managed to capture the ephemeral fun factor of a slice-of-life game, with enough RPG mechanics to keep it interesting while not overstaying its welcome.