Forever and a Day

Obsidian enlisted the aid of over 77,000 Kickstarter backers to create Pillars of Eternity, a fact of which I was reminded numerous times because it is one of the messages on loading screens. The tens of thousands of Kickstarter backers and Obsidian wanted to make a game which looks and feels similar to Infinity Engine titles from earlier days of RPGs, and they succeeded in the endeavor. While playing I could not tell that this title had been released in 2015 instead of 2001, which is only a negative for those who demand cutting-edge technical prowess to sell them on a game. I hadn’t played something like this in several years and was ready to enjoy an RPG that rewards paying attention to many details, but by the time the original Pillars and its DLC addition The White March were completed, I had partaken enough to be satiated.

This tale begins with a caravan moving through dangerous territory. The player takes on the role of a character who quickly becomes a Watcher, someone capable of observing what a person’s soul has undergone, and in certain cases able to reach back through past lives to find what the soul experienced before its current physical incarnation. Becoming a Watcher is a traumatic experience since it involves the death of everyone else in the caravan, and the protagonist seeks some answers to exactly what occurred. This part of the world of Eora is tainted by Hollowborn, babies born without souls that breathe but do not really seem to live. Figuring out what is afflicting the land, and the Watcher, will require careful navigation of the many factions both secular and theological that its citizens gather under. 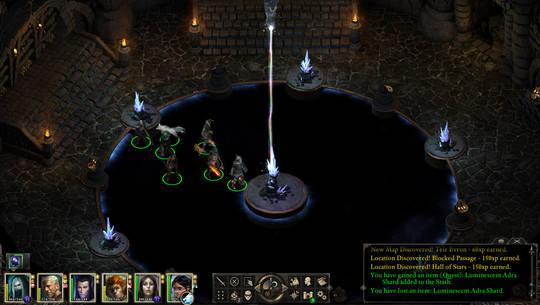 Some deities are satisfied sharing space with others. This should be encouraged.

Pillars‘ narrative is rather interesting, even if it doesn’t expand on the multitude of concepts presented as much as it could. Obsidian’s writers also did a fine job of making the reams of text flow well. Where Pillars falters a bit is in the sheer quantity of information it possesses, which is often presented to the player without a break. The world of Eora comes with enormous amounts of background and lore, particularly that subsection involving its deities and the means by which they are properly worshiped. After a certain point the player is likely to become fatigued and simply abandon the effort to research everything.

The Kickstarter heritage of Pillars of Eternity manifests in several ways during the game itself, one of the most obvious being a multitude of NPCs with detailed personal histories. These NPCs actually serve no purpose whatsoever except to let the Watcher look back into their pasts, and do not interact with the rest of the game. Their presence is interesting without servicing the rest of the game much, similar to a multitude of messages written by backers which are displayed on gravestones around Eora.

Combat finds the player’s team engaging with a multitude of assailants using invisible dice to determine the outcome of every action. Fighting can be paused whenever the player wishes, or it can be left alone to progress using whatever command setup was selected. Artificial intelligence is lacking on both sides, showcasing party members too stupid to join in an altercation within their line of sight. Enemies aren’t any brighter at least, and many times the occupants of an adjoining room who would have clearly heard the deadly encounter next door will not bother to investigate. 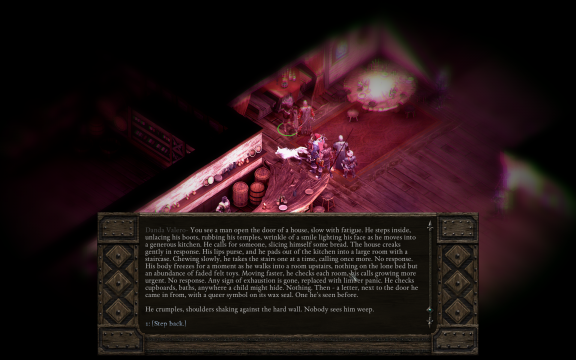 If sepia filters are inherently unnerving and otherworldly, this game will perturb many.

The player’s required attentiveness in battle is directly related to the difficulty level chosen, which can be altered during play. At the lowest setting it is usually possible to let the AI take care of grunt encounters, even with its numerous failings. Any higher setting will demand more investment into the multitude of combat options. Items that buff characters, cooldown times between weapon uses, spells that hit friend and foe indiscriminately, and areas with traps are among the variety of factors that must be considered. In these circumstances the talents and abilities available when gaining a level are important to ponder, as they can potentially alter how to approach most encounters, as well as influencing what can be done in conversations.

One aspect of the game that will dismay some is the amount of time spent managing inventory. There is a bag with unlimited storage space, but things usable in battle must be selected for each character beforehand and assigned to one of the limited active slots for this purpose. Much more time-consuming is the need to sift through all the detritus left behind after combat, as almost all adversaries disgorge multiple spoils upon death. Maneuvering through the inventory in a shop to offload everything unneeded can take a substantial amount of time, as can investigating all the components to the environment. Holding down the Tab key helpfully illuminates all things onscreen that are not simply scenery, but this is another facet that will require quite a time commitment.

Killing huge quantities of adversaries does not directly grant experience, since filling out bestiary information does this instead and the dead opponents do not. Once an opponent has been slain enough to complete its bestiary entry, future combat with it provides only spoils for the inventory. Bestiary information by itself won’t provide much experience either, as completing quests nets far more. This gives ample incentive to take on the multitude of optional missions that exist, but unfortunately makes much combat against familiar foes relatively unproductive. 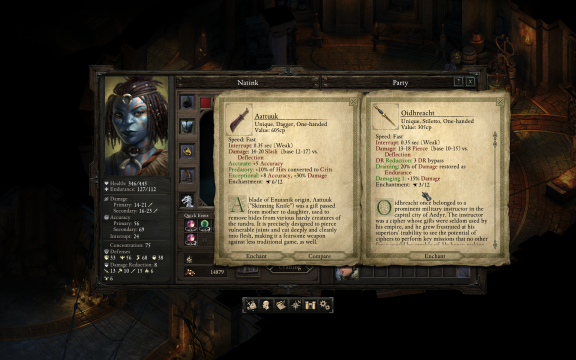 How’s your reading comprehension level? This is but one of umpteen times it will be used.

Another manifestation of this game’s Kickstarter heritage appears in the form of a stronghold. Midway through the narrative, the Watcher will happen upon an abandoned castle that needs a new ruler. Underneath the dilapidated fortress a sizable dungeon will be found, and after chipping in some funds to repair the premises additional functions are enabled. Possession of a new artistocratic estate never factors into the overall narrative however, which is something that would most likely have been brought up if the entire concept was more than a Kickstarter goal. Some fun content in the form of bounty enemies and defensive battles against aggressors are diverting, but never feel integrated with the overall game very well.

The White March contains content that genuinely adds quite a bit to the overall game, which was added in the form of DLC after the original release. It can be experienced fairly early in the proceedings and doesn’t connect to the core Pillars of Eternity experience, but stands on its own and effectively complements the rest of the game. This scenario finds the Watcher traveling to new locations with a distinct wintry setting that sets them apart from anything else in Pillars of Eternity, interacting with a variety of new personages and gaining a trio of new companions. The narrative of The White March focuses on a long-dormant forge that would reverse the longstanding decline of a local town, if only the facility could be rekindled. Plenty of new opponents are present in these areas, and the substantial expansion to the world of Eora provided here is strongly appreciated.

Given the sheer quantity of text within the game, not having all of it performed by voice actors is understandable. Some of it is nevertheless vocalized, and the performances do a fine job of imbuing extra life into the characters. Music is situational, and outside of combat it mostly remains unobtrusive and atmospheric. The overall soundscape is effective at what is asked of it. 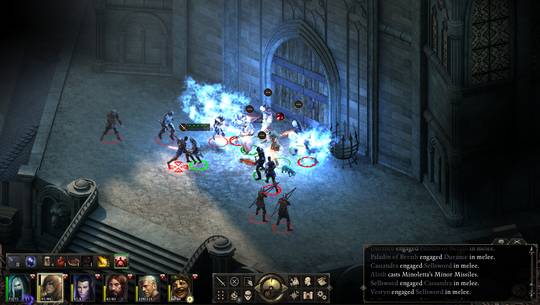 There are times when enemies just won’t give you a chance, and must be killed to prevent their stupidity from spreading.

Obsidian deliberately crafted the visuals in the style of something from many years before, and did a fine job of it. Intricate and detailed environments reward exploration, while the artwork of characters and certain events is effectively and attractively presented. Some additional variety would have been appreciated in dungeons and the enemies within them, as areas can look incredibly similar and the foes contesting passage are often repeated. This is not a title that will entice gamers concerned with the latest graphical engine on the market, but looks quite good.

Compared to something like Mighty No. 9, the Kickstarter campaign for Pillars of Eternity is a smashing success story. Its stretch goals were nevertheless not well integrated with the bulk of the game. I enjoyed my time with Pillars of Eternity and think it provides a good example of the type of RPG not seen much in recent years, but it’s not going to convince those who were never attracted by similarly styled titles in the past.