Back to Extraordinary Basics

Originally released in 2009, Persona 3 is a top-notch classic that featured many staples of the acclaimed Persona series for the first time. This year, Atlus is releasing a remastered version of Persona 3 Portable on multiple platforms. While those who have already enjoyed Persona 4 or Persona 5 will feel at home and surely have a pleasant journey, newcomers to the series will be introduced to a spectacular RPG with a wide set of demons, a great battle system, and the ability to create social links while experiencing a compelling story full of mystery and a superb soundscape.

Players choose a male or female protagonist at the start of the game, with the female protagonist being an excellent addition for veterans who have already experienced the story of Persona 3 Portable or Persona 3 FES and wish to have a new perspective of the events and different characters to bond with. The high schooler selected by the player arrives in a new town in Japan and shortly after begins the school year and joins the SEES, a group formed to unveil the secrets of the Dark Hour. This Dark Hour is an event that takes place every day at midnight, yet few people are able to experience it, with the others turning into eerie coffins while monsters called Shadows roam the city. This initial premise is more than enough to allow players to live a double life, becoming high school students during the day and anonymous heroes at midnight. With citizens reported missing and powerful Shadows appearing every full moon, the game readily creates a sense of urgency that gets players immersed in the story while also allowing them to explore the Dark Hour as they see fit.

As the story progresses, the protagonist learns more about the Dark Hour and meets many diverse characters. Enigmatic people and baffling events create an enthralling mystery mood that makes players wonder who or what they are fighting against. From students of different ages to dogs and humanized robots, the playable party is notably charming. Each of them also has strong and unique motivations that are linked to their pasts and propel them to continue fighting against greater forces, which leads to a marvelous story written with a lot of touching moments. For instance, players will totally connect with Junpei when he falls in love and will adore Aigis when she attempts to act like a human. Characters with whom players bond are nicely fleshed out, and even though some have concerns that may seem shallow or irrelevant at first, these do impact their lives in meaningful ways; some even add welcome humor when it’s necessary, with the Gourmet King and a shady businessman being two of the most noteworthy. With ingenious dialogue, emotive events, charming characters, and a good dose of mystery and plot twists, the story is amazing and remarkably manages to keep players engaged until the last moment. 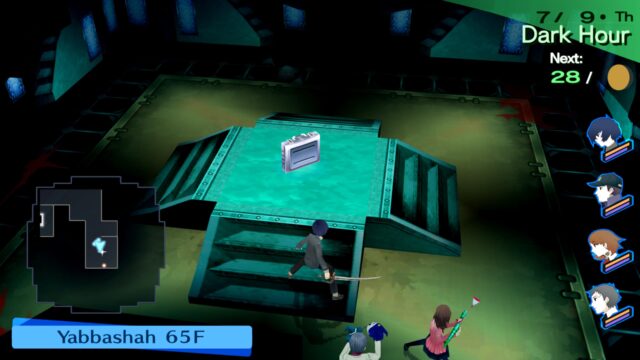 Gameplay is divided into two very distinctive mechanics. On the one hand, players attend school and need to pay attention in class, study for examinations, and go around the city to find others to bond with. On the other hand, players take control of the members of SEES and use their personas, alternative versions of themselves that represent their desires, to fight enemies. Particularly in this Portable version, this duality of mechanics is even more evident since players explore the city by interacting with people or objects of interest via a map screen while they are able to directly control the party inside dungeons. Pointing and clicking may seem initially discouraging for some, but it is ultimately effective since it prevents pointless time-wasting moving from one place to another.

The game also features an in-game calendar, with the protagonist experiencing a whole school year before finishing the story. Actions are limited each day, with players able to do one activity after school and another in the evenings. This free time is used to hang out with friends and other acquaintances or to visit places of interest in the city such as the movies, restaurants, or the arcade. The freedom to choose what to do is great and makes players feel that they are in control of their own destinies because they can select when to explore the Dark Hour and whom they want to spend their time with. One unfortunate issue is that while there are many activities to do and characters to hang out with after school, there are few characters to bond with and scarce activities to do later in the day, which leads to evenings becoming irrelevant late in the game. 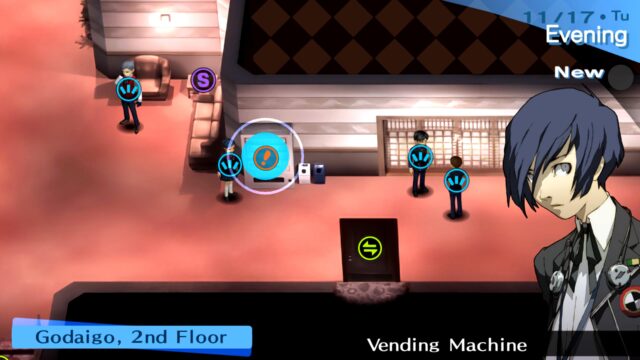 You can chat with your classmates or grab something from the vending machine.

During the Dark Hour, the heroes investigate Tartarus, a big and bizarre tower that appears where the school usually is. The SEES can go inside the tower almost every day, yet they only need to explore it between one and four times each month. Tartarus has different parts that unlock as the story progresses and more than 250 floors. Each floor is randomly generated and includes monsters that can be attacked from the back to gain an advantage, chests with loot, a stair to go to the next floor, and occasionally a teleporter to get back to the entrance where players can save their game, heal, and change party members. While exploring each floor, the protagonist can issue orders such as sending the other members to explore or fight on their own, yet this can be risky if enemies are not significantly weaker than the player’s party. With so many features, Tartarus is fun to explore and grants hours of joy. Players can also access the Velvet Room to create new personas and accept quests. These quests encourage players to revisit the tower to rescue people or find specific items. Completing quests nets the player some nice rewards, while quests with deadlines aid the overall pacing of the game.

Social bonds are a useful game mechanic as fused personas level up depending on the bond level. Players have the chance to bond with some members of the SEES, students, and other citizens. Bondable characters are always in the same spot on certain days and have a marker to indicate to players that they can try to become closer to them. Bringing a persona of the same arcana and answering things that make players connect with their acquaintances allows them to become closer and level up. This bonding feature is impressively immersive and makes social links important for both narrative and fusion benefits. 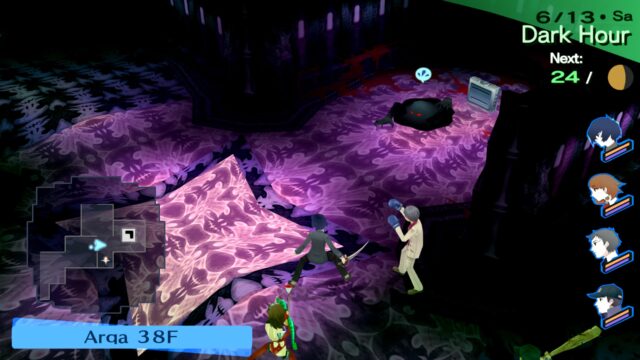 Is it worth taking out the Shadow and grabbing the item or just move to the next floor?

The turn-based battle system is fantastic. Players choose the actions of the protagonist and also whether they want to directly command the others or allow them to battle using a designated strategy, with direct control providing less headaches over poor AI decisions. The key element to beating enemies is to discover and exploit their weaknesses. When players are able to exploit a weakness, the enemy staggers and players can attack once more with that same character. If all enemies are staggered, players can use an all-out attack to deal massive damage.

There are six elemental weaknesses and three different types of physical attacks, which are also included in the list of weaknesses. Figuring out which of the nine attacks to use to get an advantage feels incredibly satisfying. Unlike the others, the protagonist can equip different personas and swap them during the battle. This makes the protagonist extremely important in battle, and results in a game over if they die. Fortunately, there is a feature where other characters might protect the protagonist from lethal blows in some moments, and even if players are defeated, they can choose to restart from the same floor without losing a significant amount of progress. The variety of enemies keeps combat interesting as the SEES advances up the tower because each new combination of enemies requires a different strategy to be defeated. Bosses also offer a real challenge since the party needs to use buffing and debuffing skills to be victoriuos in these long battles.

To allow players of varying skill levels to enjoy combat, the game offers five different difficulty settings, which is a very welcome inclusion. There is also a newly added quick save feature that can become handy while exploring the tower. The wide array of demons and items also ensures that players have many combinations to try in the Velvet Room and a lot of things to find in Tartarus. After certain battles, players get the chance to choose a card from a shuffle round. These cards can either be personas, weapons, money, health points, or extra experience points. Shuffle rounds are a fun and satisfying way to get new personas and weapons. 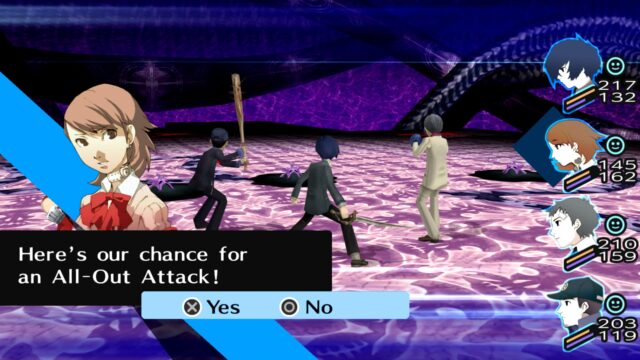 It’s a delight to finish foes with an all-out attack.

The remastered graphics look overall pretty good, yet they sometimes show their age. During bonding moments, character models are visually charming and captivating, but they look a little outdated while exploring Tartarus since the 3D models are not equally detailed. However, enemies and battle animations still look impressive even now. The lack of animated cutscenes to highlight certain moments, which are present in Persona 3 FES, is a notable omission of this remastered version, making the visuals a little plain during story scenes.

Nevertheless, what certainly helps captivate the senses is the soundscape; voice acting is full of emotion and variety, with the robotic voice of Aigis being a clear highlight. The sound effects and the outstanding music also help to create a delightful experience for the ears, with jazz and rock tunes that feature either rapped voices or female melodies that make battling more exciting, exploring more joyful, and some story beats more heartbreaking. Besides catchy tunes that will linger in players’ minds for hours, the iconic music of the Velvet Room is here to connect with veterans. While the visuals may look old at times, the game’s music and voice acting are at the same level as those of recent entries.

Persona 3 Portable is a classic that all RPG fans should play. Its features aren’t as polished as they are in the latest entries of the series, but it has a peculiar charm that makes it unique and irreplaceable. With an amazing story, great characters to bond with, and an extraordinary turn-based battle system, Persona 3 not only created fertile ground for the subsequent releases, but is back to captivate newcomers.