Paper Mario has always eschewed the boundaries of what a two-dimensional being can do inside of a three-dimensional world, and the newest title in the series crimped those edges further, into a world creased by the evil machinations of an origami boy gone wrong.  While the Paper Mario series has diverged from its more traditional JRPG elements of past titles, Paper Mario: The Origami King remains an excellent entry worthy of a second look, even for those who may have recently fallen off the Paper Mario games.  With a witty localization, beautiful graphics, engaging music, and an intriguing battle system, the game crumples up any lingering disappointment from the series’ previous two titles.

The Origami King’s story lays out where the game is going from the very start.  Ollie, the game’s main antagonist, is folding the world and the paper denizens of the world are becoming out-of-control origami instead.  With his newfound partner Olivia, Mario must set out to restore a world now thoroughly creased and full of holes.  What drives the entertaining tale home is a mix of high-quality localization, amazing comedic timing, and excellent story pacing.  The game’s flow is fairly simple: rescue a Vellumental, which provides an elemental power to Olivia’s repertoire, use it to conquer a boss protecting the ribbons wrapping up Princess Peach’s castle, then spend a little bit of downtime exploring and completing side tasks such as filling in all the holes left behind by the origami menaces unleashed by Ollie, sailing on the ocean, and conquering all the activities inside a sprawling theme park before starting the cycle over again.  Overall the game’s exploration is quite well done, with sailing on the ocean particularly standing out as the best part. 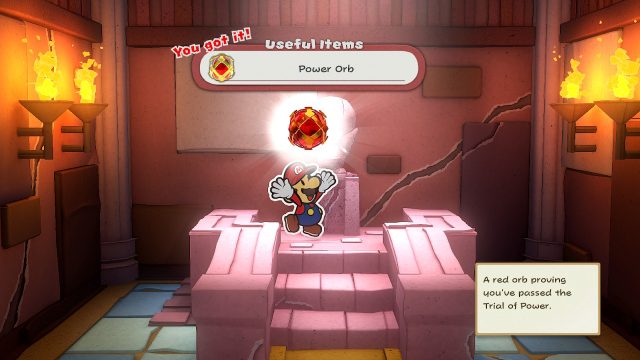 There are plenty of puzzles to solve along the way to the game’s final boss.

The game’s exploration wouldn’t be anywhere near as fun without an amazing visual aesthetic and wonderful soundtrack supporting it.  With twenty years of refinement under its belt, Intelligent Systems has the look and feel of a Paper Mario game down pat, and exploring the lush papercraft world never gets old.  It’s amazing to see how mundane places and objects like water, buildings large and small, and even grass get translated into a world that largely exists in two dimensions.  Sailing the oceans and seeing fish jump out of the waves, traveling across desert dunes in a boot car, or even just traversing the rolling grassy hills outside Toad Town all feel fantastic, especially paired with the game’s solid soundtrack, with easy tones that feel great to listen to even outside the confines of the game.  However, the game does front-load much of the collectibles into its first third of the game when the player is less savvy on where invisible blocks or other collectibles may be squirreled away, meaning backtracking is inevitable, and while this process is aided by a pipe system and “fax travel” nodes, having a more even spread of Toads and treasures across the length of the game would have been welcome.

Combat is where The Origami King sets itself apart from previous Paper Mario titles, though it retains certain keystones from past Mario RPGs.  Mario stands in the middle of four concentric rings, where enemies wait.  Players must use one to three moves to line up these bad guys, either in a single line across all four rings, or in a two-by-two block next to the center area.  While these puzzles start out extremely easy, the difficulty does ramp up sharply, especially as the game approaches the fourth ribbon.  For those able to solve the puzzle of lining up all the enemies, a bonus damage modifier is applied to all of Mario’s moves that round.  Mario sports his two signature weapons: boots and hammers are available in droves and eventually wear out with use, though Mario can always fall back to his less powerful, indestructible starter gear.  Different foes will need to be handled with different strategies — for example, Ninji cannot be struck with hammers, while spiky enemies will provide quite a painful foot for Mario should he jump on them without the proper footwear.  Just as in previous Paper Mario titles, pressing the button at the right time during a jump or a hammer windup will lead to additional damage. 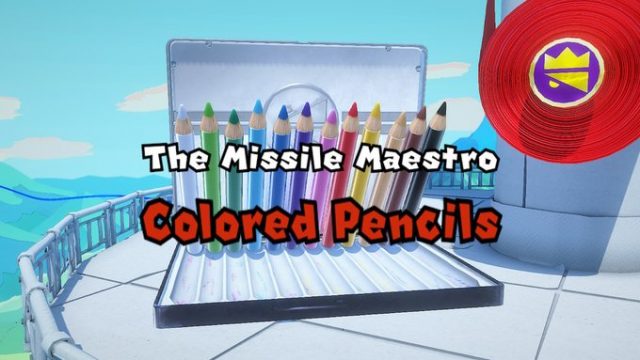 Taking on bosses will mean thinking outside the box to overcome their fiendish attacks.

For players who may find a certain setup of enemies too perplexing to puzzle out, there are optional ways to skew things in Mario’s favour: coins and Toads.  As Mario traverses the world, he can rescue Toads that have been crimped, crumpled, rolled up in holes, stuffed into nooks and crannies, jammed into fax machines, and many other ridiculous circumstances.  These Toads then fill the stands around the combat arena, and can be paid to assist Mario; the more the audience is paid, the more helpful they are, up to a maximum of 999 coins.  The closer Mario offers to that maximum, and the more Toads that are spectating, the better the results: Toads can solve the enemy lineup puzzle, toss damaging detritus at foes, heal Mario, and provide items.

Boss battles take on an additional dimension, as while the ring stays, Mario must traverse the four sections from the outer edge in order to attack the boss waiting in the middle.  Peppered with arrows which dictate the direction Mario travels, power-ups and attack icons, the rings must be rotated to ensure Mario passes over the needed panels to overcome each boss challenge.  Unlike normal battles where Mario will attack no matter what, in boss battles players must land on an attack or special action icon, and location greatly matters; attacking a boss from a specific direction, with a specific weapon, or via Vellumental powers, is crucial.  Much like in normal battles, Toads can be called upon to assist, but instead of moving around the rings, a path is shown where Mario will travel, so players can make informed decisions on how to move the rings.

Eschewing traditional RPG level-up systems, The Origami King instead rewards players by doing all the non-combat activities the game guides players towards: exploring the world at large, liberating Toads from their unwilling origami forms, collecting treasures, and bopping all the question mark boxes.  Regular upgrades are peppered through the game and a helpful Toad in town can direct Mario to any missed opportunities.  Making exploration the chief path to progression instead of tying it to combat makes the game closer to a Zelda title than a Mario RPG, and the game is both blessed and cursed because of it, as it results in non-boss fights feeling like trivial things getting in the way of exploration. 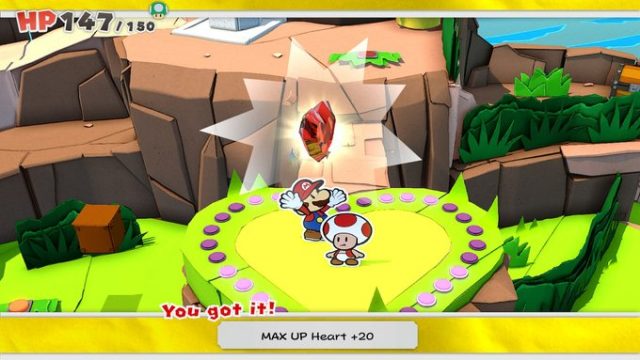 Upgrades can be found in unexpected places, or by simply pursuing the game’s main storyline.

Getting geared up and ready to explore the world and tackle bad guys is a breeze with The Origami King‘s colourful and easy to use menus.  Each area is highlighted on large maps, and Mario’s progress in collecting each area’s goodies is tracked by category.  Mario can also use a submenu to equip accessories, which can change the flow of battle or make hidden objects easier to find.  Lastly, which weapons Mario will wield in combat can be reviewed, with a limit of three hammers and three boots.  These simple, streamlined menus show a complex menu system isn’t needed to provide oodles of information to the player.

Paper Mario: The Origami King is a great title that proves bouncing back from a low point in the series isn’t an impossible task.  While not the perfect Paper Mario title, it certainly enshrines itself as one of the best.  While the lack of traditional leveling may turn off some players, those who are willing to dive in and see what the game offers will be rewarded with a largely satisfying 30-hour experience with plenty to do.  If nothing else, The Origami King does show there’s an identity to be had between the core RPG experience of the Mario & Luigi series and the platforming experience of the mainline Mario titles.