I wasn’t expecting Orangeblood to stymie my progress for several days.  Exactly what caused the issue is up for debate, but never has one of a game’s files set off an antivirus alert before. That’s not the only way in which Orangeblood stands out from the crowd of games I’ve played, and I’ll remember it for some time to come. ‘Memorable’ and ‘good’ are not synonymous though, and while I can appreciate some of what’s being attempted here, it mostly left me unconverted.

After a quick introduction in a CIA holding cell, the entirety of Orangeblood takes place in New Koza. Vanilla Vincent has been tasked with doing some off-the-record work to get released from custody, in a city off the shore of Okinawa filled with mafia members from various nations. Along with her unprepared assistant Machiko, Vanilla gets promptly attacked by the Russian mob. Defeat in this encounter does not spell the end, and the pair take off to investigate the numerous tiers underneath New Koza while fending off frequent organized crime aggressors.

The setting of Orangeblood is an alternate Earth where history took some different turns, but very little of this is explained or addressed. A few hints about the outside world never take the focus away from New Koza, which would be fine if this place was developed into an interesting setting. An artificially created city off the coast of Okinawa where multiple organized crime organizations have separate fiefdoms and no authorities are evident ought to be a ripe location, yet that never comes to pass. Vanilla is uninterested in learning about the place any more than she has to, while most of the events that transpire could have occurred anywhere. New Koza doesn’t become enough of a distinct location, except through its NPCs speaking in text boxes that are automatically generated and disappear after a moment on the screen. 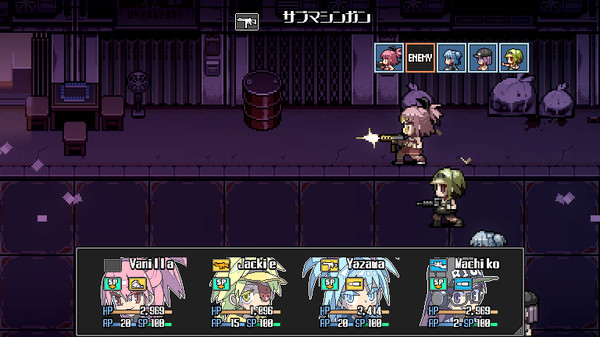 Not included: one of the characters saying “That’s hella wack!”

Playism’s localization made the choice to festoon Orangeblood with edgy profanity and hip-hop slang constantly, which does give the text a unique feel. This approach also wears out its welcome very quickly, as the sharp ‘edginess’ of the words chosen usually outweighs whatever comparative mundanities are being said. Such a style takes over from the narrative itself and distracts players instead of adding anything. The protagonists are far too cheerful about murdering their way through umpteen soldiers of organized crime, even though Vanilla supposedly has plenty of experience in the field.

Combat is turn-based with several additions to the usual formula. Protagonists are packing heat and mowing down their adversaries using bullets, which becomes a gameplay mechanic because reloading a firearm requires a turn. Skill points serve the purpose of letting extra moves be deployed beyond simply gunning opponents down, but SP are gained through receiving and dealing damage, and do not carry between battles. Items cannot be used in combat, and the limited generation of SP means healing can be a challenge.

Fights in Orangeblood are dependent upon preparation more than anything else. Firearms come in a few basic types but have a wide gamut of potential effects. Some pack extraordinary firepower in exchange for eliminating the chance to dodge anything, or have a tiny magazine that needs frequent reloading but is formidably accurate. Bosses sport the ability to act thrice per turn alongside minions that offer them significant buffs, and without effective equipment in place are quite capable of ripping the player’s side apart. Regular opponents near the end of the game also boast sizable HP counts and get to move more than once, just in case the player hasn’t come up with a means of coping yet. At least Orangeblood is kind to defeated players, sacrificing only about a quarter of the current cash instead of any progress. 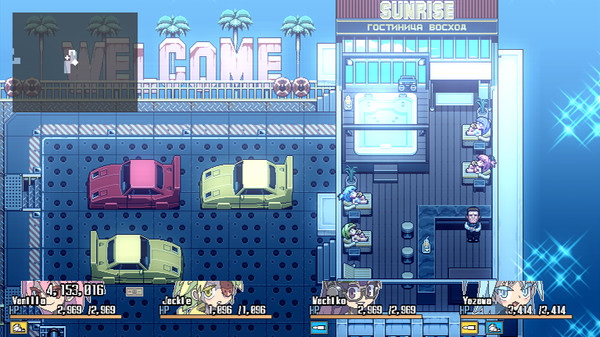 Would you want to be in the pool next to the flying car parking lot? Really, would you?

Sifting through all the information to make the optimum choices for equipment isn’t always easy due to the multitude of variables at hand. To obfuscate matters further, the descriptions of items are often couched in more hip-hop terminology that isn’t properly justified, leading to words being awkwardly broken between lines. Luck also plays a considerable role, as shops have a much smaller role in outfitting the player than what is discovered in random chests strewn through the dungeons. Orangeblood is at least kind by immediately letting players sell spare inventory once the maximum of fifty for each category is exceeded, something that keeps the materials on hand from becoming overwhelming.

Orangeblood‘s musical accompaniment is in keeping with its hip-hop dialogue, and much of it is catchy. The number of compositions is not particularly large, but is definitely enough to keep things varied for the ten to fifteen hours required by the main quest. Sound effects are frequently attention-getting due to how overpowering they are in the audio mix, but are effective in their depictions of things such as gunshots or doors opening. As for the visuals, they effectively bring New Koza to life while seeming comparable to something the Super Nintendo could have hosted. Enemies in particular have a fair amount of personality.

Several additional achievements are locked behind an optional dungeon, but after struggling to find the right formula for success against the later bosses, I was done with Orangeblood. It tries to do a lot of things, and definitely has a distinct personality from anything else I remember playing. Layering everything with needless profanity is not the magic bullet to become amazing though, and using the game’s real bullets is often more complicated than it should be. If a sequel should come to pass, there’s plenty of room for improvement.