One Way Heroics is a side-scrolling roguelike created by a smoking wolf with a penchant for feral dogs. The unlikely combination of genres is turn-based, but controlled by the most final of countdowns: the end of the world. Eternal darkness seeps from the left side of the screen, pressing ever-forward across a procedurally generated world. The silent hero must not tarry on the journey right, at risk of total annihilation. The world is divided into different terrain types such as stamina-draining snowfields, fiery volcanoes, and dungeon-filled ruins. Monsters, campers, towns, and tiny dungeons break up the omnipresent spread of forests, mountains, and lakes. Every encounter offers opportunity and an implicit warning: spend too long dealing with it and it’s curtains.

Living on the edge of the world creates tension and patho — usually the fun kind! After getting a feel for how fast the darkness advances, it’s not too hard to avoid being consumed. However, it does drive tactical choices. Sometimes the only way to survive is leaving a tempting treasure to the void. Resting up for a big fight is wise, but resting too long is deadly. Traveling quickly keeps the darkness at a safe distance, but limits the time spent killing monsters, gathering treasure, and looting dungeons. On a more emotional level, staying close to the edge of the world reveals the screams of the townsfolk who are consumed, resigned to their fates but unwilling to suffer in silence. Lakes, mountains, and walls can all interfere with rightward travel. Lakes and mountains can be crossed at a penalty to stamina and time; walls can be hacked down, which is both viscerally satisfying and helpful in establishing new routes. 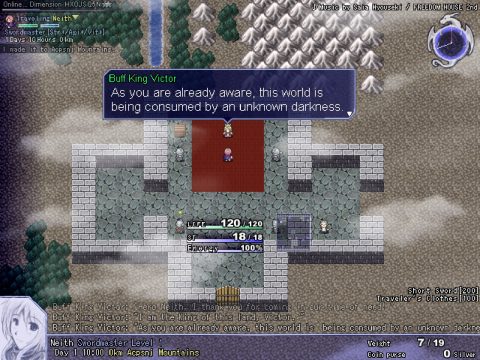 If he’s that strong, he should lend a hand.

Much of One Way Heroics‘s challenge comes from managing its subsystems. Combat is a simple matter of walking into enemies, so survival is less a matter of individual battles and more about creating a longterm survival strategy. Stamina decreases over time; energy powers special attacks; weight constrains gear carried into battle. Consumables can help in a tight spot, but learning which spots are tight enough to warrant a rare herb or potion requires learning the rules of the world. Weapons and armor wear down as they’re used, so success depends on finding a balance between upgrading old standards and salvaging new ones. Even experience levels are a form of currency, since they can be spent to save the game or tweak baseline statistics. The sum of these decisions leads to a final battle against the Demon Lord, the bringer of darkness.

Victory against the Demon Lord ends the quest and provides insight into unresolved mysteries. On most difficulty levels, the Demon Lord attacks after a set number of turns, which is tracked by a clock in the corner of the screen. The first time the Demon Lord appears, most heroes won’t be ready. Staying alive long enough delays the final conflict until a later time — hopefully after accquiring more allies and better statistics. Two alternate victory conditions also exist: reaching the end of the world and unlocking the Demon Lord’s terrible secret. The initially limited story is also helped along with the discovery of allies. As allies bond with the hero, they share their backgrounds and suggest deeper connections to the world. Each top-tier bond adds an extra scene to the ending. Unlocking multiple endings is a story-centered reason to continue questing; the Hero Point advancement structure provides the mechanical heft.

Every quest, whether or not it succeeds, generates Hero Points, which can be spent to unlock new classes (like pirate), skills (like pet owner), and slot in the Dimensional Vault (to carry equipment between quests). Hero Points are awarded based on easily measured criteria (e.g. treasure grabbed, monsters killed, distance traveled) and voluntary actions (eschewing saves and the Dimensional Vault). This way, permadeathers have the challenge and grit they crave without excluding everyone else. Players can further tweak the challenge level by selecting different quest lengths and following acceptable morals. Killing the occasional endangered animal or helpful merchant can help in the short run, but overindulging can lead to consequences. 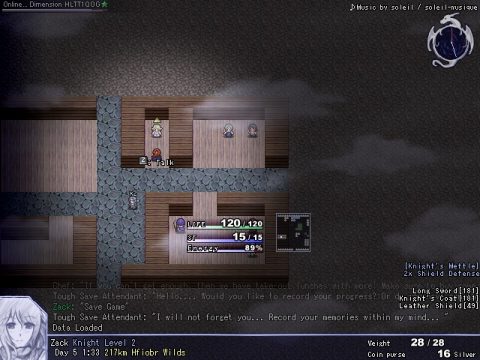 Even if you win, many towns will be destroyed.

One Way Heroics‘s flaws are the result of its low production values. There aren’t many songs and they loop endlessly, but they’re easy to turn off. Monster variation is limited, and the graphics are functional rather than evocative. Diagonal movement and aiming require an extra click. All of these issues are tolerable. The localization is a larger hit to the overall experience. Although the story has humor and serious moments, the localization drains the impact of both. While the language is generally correct in the technical sense, it’s stilted in the sense of an overly literal translation. Other issues include over-reliance on ellipses and the use of “they” to describe characters with unambivalent genders. Despite these issues, One Way Heroics is a fine time-waster that demands little investment for its fun.

Overall, Smoking WOLF’s One Way Heroics is a good deal. It’s $1.99 on Playism or $3.49 on Steam for a managably lengthed roguelike experience. The difficulty scales well, so it works both as a single-serving distraction and as an extended campaign to unlock all of the secrets. At the higher difficulties, it’s easy to fall into a flow state and lose several hours searching for just one more town, level, shot of dopamine. Although the presentation won’t win any awards, the underlying mechanics are worth a look — either here or in the recently released plus edition. 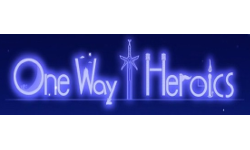