It has been twenty-four years since the release of PlayStation title Monster Rancher, known in Japan as Monster Farm. The first game spawned numerous other games, as well as an anime series. Koei Tecmo has given players the chance to relive those days with Monster Rancher 1 & 2 DX, a bundle containing remasters of the first two titles. An engaging gameplay cycle, combined with substantial quality-of-life improvements, makes this monster breeding RPG a welcome addition to the lengthy list of remastered games available for RPGamers on the Nintendo Switch.

The first Monster Rancher game opens with players taking on the role of a new monster breeder who has come to join the the Fraternal International Monster Breeders’ Association (known as “FIMBA”), while Monster Rancher 2 has much the same premise but takes place on a nearby continent with players joining the International Monster Association (“IMA”) instead. Once players have joined their respective association, they are given free reign to raise monsters with the goal of fighting them in tournaments, raising the rank of both monster and rancher.

While the story is sparse — with little apart from some additional history of the games’ universe upon clearing the final tournaments — what’s there is sufficient to establish the basic premise and allows players to get straight to the business of monster mashing. The goal of a breeder is to become the greatest monster raiser, ascending through the ranks of the organization upon winning tournaments. While this process will likely take many in-game years to accomplish, each monster only lives a handful of years. 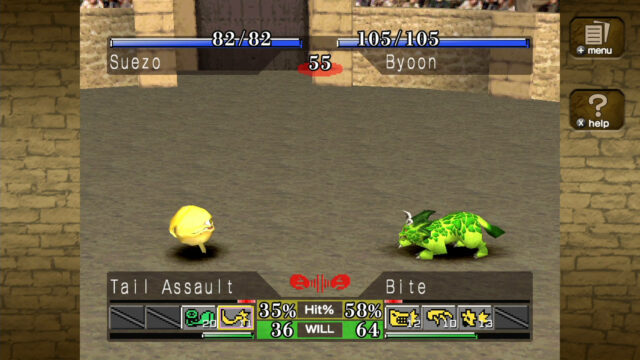 In battle, monsters can be controlled manually or left to AI.

At the onset, players are able to either receive a free monster from the market or summon one at a temple. The original games’ monster-generating feature, where players used physical CDs to spawn different monsters, has been reworked so that players can search a database to find new CDs. While this solves a problem that the original designers most likely never contemplated, the system is not perfect since some popular artists are nowhere to be found and it is impossible to replicate the novelty of grabbing random CDs and throwing them into the console. Still, the extensive list of songs and games available is impressive.

The game moves in week-long increments over the course of a repeating twelve month calendar. With each week, ranchers are given the opportunity to work with their monster, increase statistics, and earn money. They can battle other monsters in tournaments, rest, or send the monster to train so it can improve one statistic for four weeks. In Monster Rancher 2, this system is modified somewhat to allow monsters to learn additional battle skills duringthe weeks-long training trips referred to in-game as Errantries. The in-game calendar providers a preview of specific events occurring during each week, including optional tournaments — think Christmas or Summer tournaments — for additional loot and items.

It sounds relatively simple, but the immediate sense of simplicity belies the complexity waiting for the most technical of gamers. Monster Rancher leaves players to their own devices, providing little to no explanation to the significant under-the-hood mechanics that only get expanded upon in Monster Rancher 2. Players should spend the first few hours exploring these many constructs to avoid becoming quickly overwhelmed with the basics of raising monsters. Knowledgeable breeders can game the system a bit by feeding specific items to monsters in order to offset fatigue and anxiety from overwork while also emphasizing heavy drills which increase two statistics while decreasing one. As each monster is born with strengths in particular stats, it is best to emphasize those few during development to avoid ending up with a monster at the cusp of retirement who is generally average and unable to reach the next ranking. 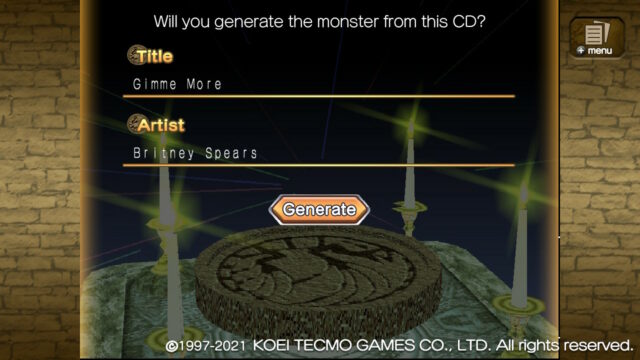 To attain a higher rank, monsters must prevail at the FIMBA or IMA tournament, starting in the E level and working upwards. As breeders produce these higher-ranked beasts, their own R-ranking increases. At each higher rank, the number of challengers in a tournament increases as does their power level. The Monster Rancher games ultimately require sharp resource management in order to efficiently train monsters without overtaxing them to the point of exhaustion, anxiety, or worse. The initial weeks are crucial to a new monster as it develops loyalty to the breeder. A monster with insufficient loyalty is likely to act confused and not follow directions during battle. Spoiled monsters are willful and may run away, and a monster out of willpower may die after being knocked out of battle. If players dislike their monster, they are free to combine them or sell them back into the market.

Monsters are also on borrowed time, and most will die or retire from fighting before they can ascend to the highest ranks. Players can freeze their monsters for later use and for combining with other monsters. This gambit adds another layer of complexity to the monster system, and even more possibilities when breeding monsters. The singular focus on raising one monster at a time, coupled with the taut resource management and cross-breeding required to reach higher echelons sets Monster Rancher apart from other monster collecting RPGs. The point here is not to collect them all, as attempts to do so will quickly run into storage limits in the lab. Instead, the goal is to breed, raise, and cross-breed until players have collected the one.

Once players are satisfied with their monster, it is time to battle. Each month, players can participate in tournaments. During these battles, players can either allow AI to fight or control their monster, moving left and right with the shoulder buttons. Using abilities expends willpower, which increases with time during battle. While the  monster moves back and forth across the battlefield, an arrow to select an ability moves with the monster. Trainers must match up their cursor with the attack icon to execute an ability, known as guts in Monster Rancher 2, as long as the monster has enough will points. 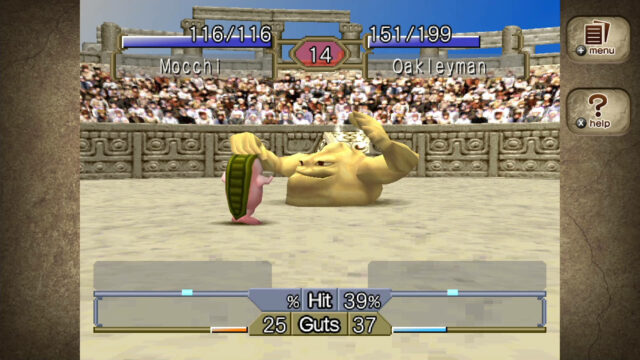 Battle graphics in Monster Rancher 2 are an improvement over those in the first game.

The battle system is driven on statistics and blind luck, as there are no elemental weaknesses to exploit. If a monster is unable to proceed to the next rank, diligence and additional training should be enough to eventually make it provided they don’t get too old. This is essentially the difficulty curve, as players will either find the gameplay loop enthralling or a chore. Those who continue forward will find themselves awash in options for monster fusion, additional monster types to unlock, and adventure sequences where monsters assist on expeditions and secure rare items.

The battle sequences are where the player is given the chance to engage in RPG combat, but the rest of the gameplay is driven by menus. Players should expect to navigate menus at the ranch or in town, and even to schedule training for the monster. These training sequences are entirely automated and shown by a small 8-bit model of the monster performing the assigned task. These segments are short and cute, but not exactly engaging.

Monster Rancher 2 features refined gameplay mechanics compared to the first game and will likely serve as the main draw for online play. It includes a dozen or so additional monster types to unlock as well as the aforementioned Errantries, which serve as a hybrid between the exploration-type quests and training introduced in the earlier title. One of the most notable improvements leading into Monster Rancher 2 is the refined graphical presentation of the monster characters. While they still suffer from the limits of early PlayStation graphics, these monsters are more expressive and demonstrate more personality. Training and errantries also have an improved graphical presentation, adding a nice touch. 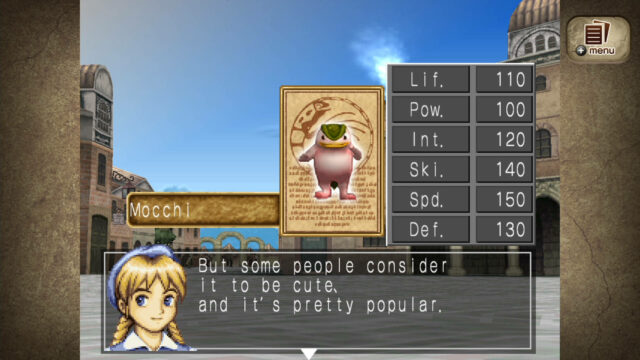 Koei Tecmo has taken measures to improve the games for modern consoles and the result is a smoother experience. Both games benefit from some graphical enhancement, including smoother textures and monster models. The designs themselves are still blocky and ugly, but there are hundreds of combinations of monsters available and the game has surprising ability to differentiate them. Each monster has a number of varied expressions and reactions to stimuli both in and out of battle. This is an impressive feat for PSX-era games, but they still struggle even when considered as products of their time.

Both games suffer from poor audio, with only Monster Rancher 2 offering a remastered soundtrack option. The compositions are largely forgettable and while listening to the music on the speakers of the Switch provides little issue, both titles sound rather unpleasant through larger speakers or headphones, and may warrant turning off the audio altogether. Other quality-of-life changes included additional save slots, increased capacity for freezer storage, and a high-speed mode. The ability to play the game at increased speed is very welcome, especially given the required long-term planning for success. However, battles in high-speed mode can be hectic if the player insists on controlling their monster.

Included in the DX remasters is a versus mode, allowing players to submit their own monsters to duel with those created by other players. While this is not pure PvP as players fight against a computer-controlled monster created by another player, the ability to engage in ranked tournament play with others online is a welcome addition to these titles and a great modernization approach considering gamers were unable to complete in online play when these games were released in the late 1990s. There is also couch co-op, allowing local players to spar in another welcome touch. 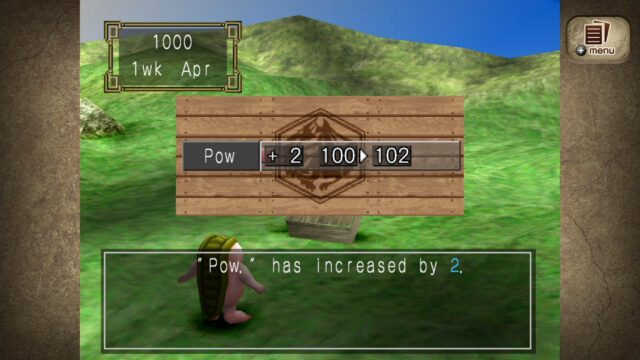 Most gameplay mechanics return in Monster Rancher 2, albeit with improvements.

There is no true end to the art of monster ranching. Aside from attaining the highest R-ratings, players can continue to breed monsters for as long as they like. There are at least a dozen or so monster types to unlock in each Monster Rancher title, requiring players to breed specific monster types, explore ruins for monster-specific items, and more. That is, in essence, the spirit of Monster Rancher 1 & 2 DX. Both games eschew story for incredibly dense gameplay systems that have something for everyone.

Monster Rancher 1 & 2 DX are a good example of useful preservation of video games. Without these remasters, it would be very difficult for gamers to properly experience the CD-summoning gambit.  Not only are these titles carefully ported over with a clever fix for the primary gimmick, but they also feature substantial quality-of-life improvements which streamline the experience and improves the general presentation for a new generation of monster lovers. While some may find the graphics and sound too outdated to enjoy, players looking for a trip to the farm will find their plates very full.