Two of my favorite game series are Dragon Quest and Rune Factory, particularly the Dragon Quest Monsters spinoffs. When earlier this year I saw that Monster Harvest was basically a farming sim with turn-based monster battling, I slapped down a pre-order in a heartbeat. As the release date got pushed from May farther and farther back into August, I was anxious to play, yet I accepted the delay hoping that the game was a complete product. Turns out the few months of delay were not enough to fix everything. Monster Harvest on Switch released as a boring, unfinished, and unbelievably buggy title.

The introduction to the story of Monster Harvest is on par with many other farming sims: players take on the role of a young boy or girl who moves to a small town to work on a farm. The hook here is that the character’s crazy-looking scientist uncle has discovered multiple uses for slime, and the town is suddenly booming with activity. He’d like players to run the farm and figure out what a local company, SlimeCo, is up to. Nice hook, but that’s 95% of the plot progression right there. The remaining lines of dialogue could be counted on a single hand. 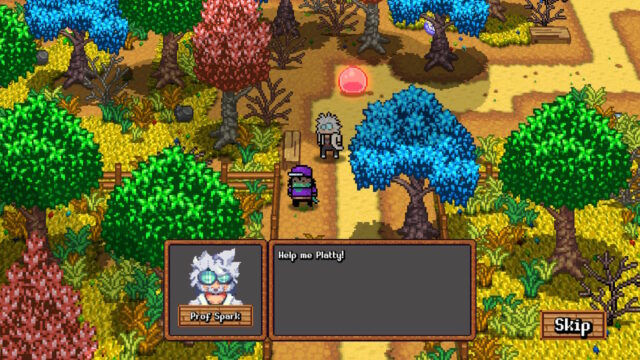 Uncle Spark has a distinctive look and need for help figuring out what’s going on.

The main task in Monster Harvest is the farming. Players have a hoe to till the soil, a watering can to water, an axe to chop trees, and a pickaxe to break up rocks. Seeds can be purchased in town or found in the dungeon, grow only in set seasons, and bear veggies after a set number of days. The ripe vegetables can be sold, consumed for stamina, combined into hybrid plants, or cooked once a house upgrade has been purchased. While most of these are farming sim staples, the fun part of Monster Harvest is in doing none of those things though! With a nearly unlimited time to play each game day thanks to the absence of the genre’s ubiquitous clock running in the background, players can planimal to their stamina meter’s content! Using various colored slimes, players turn crops into planimals (plants + animals) to battle, barn planimals that produce goods, or mounts to ride around on. While all this is quite interesting to play with, much of it comes with zero in-game explanation. Those with little experience in casual farming sims may easily miss whole aspects of the game as very little is explicitly told to players.

Interacting with the population of the local town is typically a big draw for casual farming sims. Unfortunately, this is yet another aspect that is all but absent from Monster Harvest. Like many similar games, players can talk to NPCs and give them gifts. However, other than a discount from the local store, it’s unclear if gift-giving or raising friendship levels affects gameplay at all; there is no dialogue progression, side quests, or reciprocal gifts. NPCs never alter their dialogues, hand out side quests, or give gifts in return. Festivals occur on set days throughout the game’s three seasons, but much like many other gameplay aspects, they are boring, empty affairs. Seeds for the upcoming season are available for purchase, and blessedly townspeople have a single new line of dialogue, but with no contests or mini-games, the sole useful activity is dropping by for a quick purchase, then immediately departing. 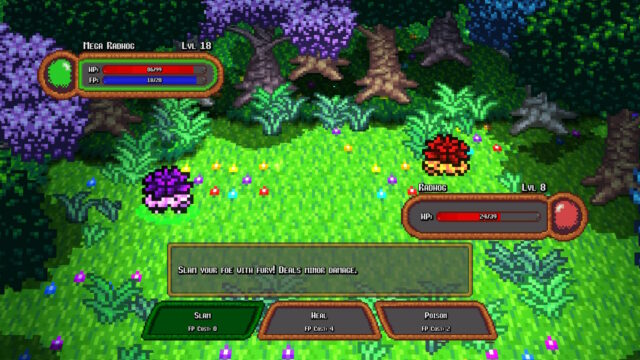 Planimals battle it out via a feature-lite turn-based battle system.

Besides farming, players will find themselves using the planimals they’ve harvested to dive into the single dungeon the game offers or to battle townsfolk and their planimals every Friday. The single dungeon consists of randomly generated rooms that contain resources to gather and wild planimals to battle. It is comprised of five increasingly difficult floors that provide increased rewards. While it is fun to explore for a season or two, five floors total in an entire game is quite short and the seasonal variety of the environments only holds interest for a short period before monotony sets in. The arena-style battles against NPCs act as a mechanism for extending the otherwise short play time of Monster Harvest since only three townfolk can be battled weekly, and to reach the final boss, many trios must be defeated.

The battle system is where Monster Harvest had its chance to set itself apart from the long line of Rune Factory and Stardew Valley clones. Instead of ARPG sword swinging, Monster Harvest has players raise planimals and battle them against enemies in turn-based battles. It’s a new take on the casual farming genre, but like everything else Monster Harvest offers, still needed additional time to sprout. In battle, planimals can use up to three attacks based on how high a level they’ve reached… and that’s it. Since the 1980s, turn-based battle systems have allowed players to use items or run from combat; since the original Pokémon games in the 1990s, the ability to swap out monsters has been a staple; however, none of these features are present in Monster Harvest. Planimals battle until one dies. If players’ planimals win, they get experience. If players’ planimals die, they are gone for good, as there’s no resurrection mechanic. The player is left with the paltry reward of some hearts that can be used to raise soil quality back on the farm, so that future planimals start at higher levels. It’s a hard pill to swallow when dozens of lovingly raised creatures die in combat seasonally.

Monster Harvest looks to have two very differing visual styles. The world is well-designed, with a bright color palette that shows off how great pixel art can be. The slightly tilted viewing angle and shading effects give give a slight 3D feel to the 2D environments. The designs of the characters and NPCs however seem plain and flat, as though they’re 8-bit characters running around in a 16-bit world. They just don’t seem to gel well together. One thing Monster Harvest does well is audibly setting the tone, with peaceful music that perfectly fits the mood of a farming sim. 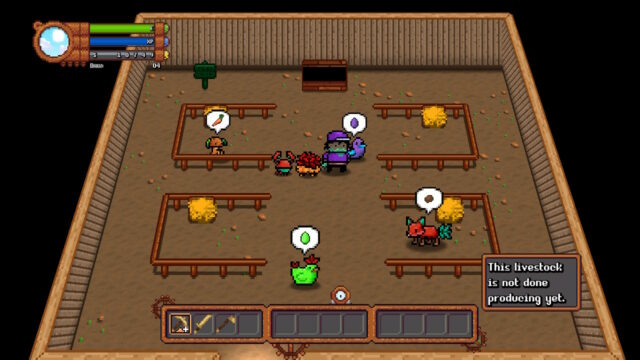 In addition to reiterating how feature-light the title is, it would be a little remiss not to point out some of the vast number of bugs in Monster Harvest at this time. These range from numerous graphical glitches to noticeable slowdowns, to completely locking out features. Both saving and loading are embarrassingly long, taking upwards of a minute each time. There are times the game will not load a save, or when saved and exited, will load up a couple days previous, therefore losing progress. Players can get stuck in water in caves when moving between screens and need to restart the game to continue. Text is so small on many item description screens as to be unreadable in handheld mode, and require some great eyesight when docked. At level 12, all experience gained by the player stops, which the publisher has assured is a glitch, not a level cap. A bunker, aka greenhouse, opens at one point, but out-of-season crops currently don’t grow inside there as planned. Hybrid crops made at the scientist’s lab work great for the first dry season, but then never again throughout the game. Once the dark season begins, to get regular crops to grow, the game has to be restarted and reloaded every game day. After the first two days of production, the barn animals show they have items produced, but collection of said items is impossible. Multiple times the sword stops working while in a dungeon or the shopkeeper stops speaking to the main character, both of which require restarts to fix. Mounts are hit and miss, some days they’ll be in the stable, other days they’ll randomly populate in other areas.

I’d like to be able to say that aside from the bugs, Monster Harvest is a great game, but that’s just not true at this point. The game is just missing too many staples that other farming sims feature. There is little main story, no NPC interaction, a near featureless battle-system, no side quests, and barely any small intermediary goals throughout the game. Even beating the final boss is greeted with a single line of dialogue and zero fanfare. Publisher Merge Games has repeatedly claimed additional content will release when debugging is complete. It would be worth RPGamer’s time to wait for both of those events to occur.