The original Yo-kai Watch was a game I reviewed for RPGamer years ago. I loved it in concept, but I found it physically hurt my hands, as I suffer from arthritis. Colour me super excited that Yo-kai Watch 4 was moving to the Nintendo Switch, given the last three games were exclusively for the Nintendo 3DS.

The opening of Yo-kai Watch 4 has you in the shoes of a young girl named Natsume who can see yo-kai. She gets up ready to meet her day, and all of a sudden the yo-kai are at play.  She finds out that there is a boy who doesn’t look right near her school. Choosing to investigate this issue we learn that the boy is in fact a yo-kai, and he looks like an anatomical doll used for science class. Possessed, he attacks and we are dropped into our first real round of combat. 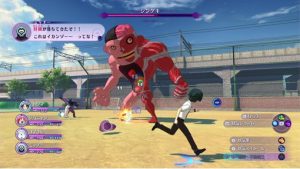 Battles in Yo-kai Watch 4 feel very similar to another Level-5 game, Ni No Kuni: Wrath of the White Witch, only with a competent AI. Battles feel very fast, and the newest element is that humans now participate in combat, whether it’s providing support to their yo-kai companions, or joining the fray to attack the enemy.  Natsume can also shoot blue beams, though if I am being honest, Scott and I weren’t entirely sure why that was or what the beams really did. We were also able to summon a giant ghost dog, and once our battle was over with the Anatomy Boy, Keita, the main character from the previous games showed up via time travel shenanigans.

I had a lot of fun playing this demo. Natsume’s town was a joy to explore and it was fun to chat with the different yo-kai, even though I can’t read a lick of kanji. I hope this game is localized for Western audiences because I feel like this would be the one that would make me jump back into the series. While Yo-kai Watch 3 has been announced for North America and Europe, at this point Yo-kai Watch 4 is only releasing in Japan sometime this Winter.