Momodora: Reverie Under the Moonlight Review

Short and Sweet, but May Leave You Hungry

Momodora: Reverie Under the Moonlight is the fourth entry in a Metroidvania series that started as a love letter to Cave Story and Mega Man. The series has continued to improve over the years, culminating in a fun and highly polished entry in this most recent release. While the first Momodora is very reminiscent of Cave Story in terms of both graphics and gameplay, Reverie Under the Moonlight finds its own aesthetic and experiments with new and interesting gameplay mechanics. With the PS4 version, the series makes its first foray onto consoles.

Reverie Under the Moonlight is a prequel to other games in the series. The story is sparse and straightforward. It follows Kaho, a priestess who travels to the kingdom of Karst to stop a curse originating there and affecting her village. It is mostly lore-driven and while its lore is elusive, it starts to paint a very interesting world full of intrigue. In addition to the lore, the story features a few powerful moments, and the game’s true ending is surprisingly satisfying. What exists is very effective, and adeptly creates a sense of mystery about the events that take place. Unfortunately — and despite a handful of interesting locations and NPCs encountered throughout the game — the short playtime clocking in at just under 5 hours isn’t enough to adequately develop it. The story is barely there, with very little plot and very few events between setting up the premise at the beginning and reaching the game’s ending, and the limited number of lore texts aren’t sufficient to jump-start players’ imaginations. That the developers choose not to more deeply flesh out the world and characters is a real missed opportunity. 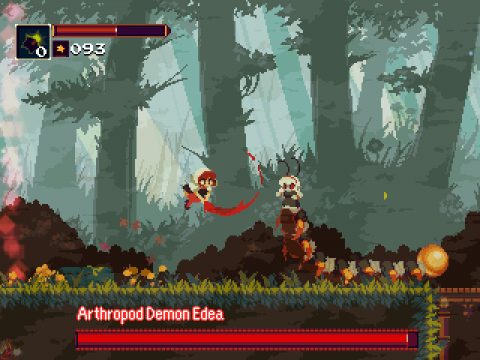 Apparently hitting someone with a large leaf can be quite painful.

Gameplay in Reverie Under the Moonlight is a mixed bag. Kaho uses a large magical leaf for melee attacks and a bow to attack from range. She also gets a plethora of items that enable her to use different defensive and offensive spells. One item in particular allows Kaho to change to a more agile and faster form at the cost of being able to use other items in battle, adding variety to the gameplay. There is also a clear Souls influence to the combat, with strong punishments for making mistakes, Estus flask mechanics with used items being replenished at save points, and reliance on rolling invincibility frames to avoid damage. These ideas are great on paper but the their execution falls short. While in theory there is a good amount of variety to combat, in practice most interesting abilities can be permanently missed. Each of these is obtainable only during a single fleeting opportunity that is both very obscure and very tedious. And while making mistakes in combat can be punishing, the combination of an overabundance of healing items, high damage player abilities, and simple, uninteresting boss patterns, make most bosses button mash fests with a handful of rolls thrown in for good measure. This is especially disappointing as the combat mechanics themselves are excellent despite the failure to design encounters that highlight that fact.

Exploration can make or break a Metroidvania. Reverie Under the Moonlight covers the basics in game layout design, but makes several mistakes that keep it from being exceptional. It features a number of different areas, many of which can be tackled in any order chosen by the player. Players can also acquire abilities or keys that unlock new sections and secrets within these areas, leading to the enjoyable backtracking characteristic of Metroidvania design. Unfortunately, most of the unlocked secrets lead to item upgrades or to money — which can be collected from standard enemies instead — rather than new interesting and unique items. More often than not, new or hidden areas are unlocked with keys rather than abilities. Due to these factors, exploration can sometimes feel bland. In addition, the different areas don’t often interconnect, and there are few shortcuts to unlock, making the level layout feel simplistic. It comes across as a set of independent areas that branch out from the central, linear path. 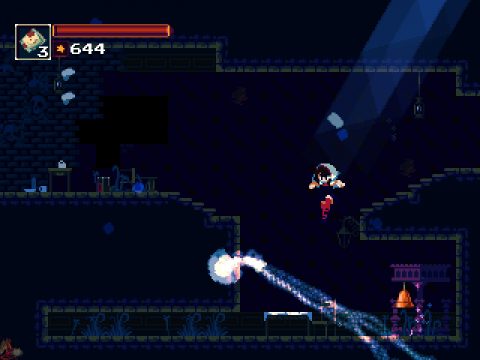 Kaho doesn’t need to breathe underwater, but the sparse lore doesn’t reveal whether she is part fish or part zombie.

Graphically Reverie Under the Moonlight is beautiful. Despite its pixelated look, it features top-notch sprite work that breathes life into the characters. Its varied environments range from serene forests, to dark cities, to underwater areas, and feature richly detailed backgrounds full of unique atmosphere. Whether in dark or bright environments, the developers use vivid color palettes to great effect, and manage to produce a consistently appealing aesthetic throughout the entire game. The game also features great animations that are expressive and fluid. Unfortunately the 4:3 aspect ratio, lack of support for widescreen, and the low resolution are not ideally suited for TV screens. It’s a shame that the developers don’t focus on improving this experience for the console version, though these aspects don’t detract too much from the overall great graphics. The slow, dark music compliments the environments well and sets a mysterious and melancholy mood, while high-energy battle tracks accompany boss battles and other action. The tracks are high quality and a handful of them are memorable, but the soundtrack lacks the variety to make it really stand out.

Reverie Under the Moonlight is a highly polished Metroidvania with wonderful aesthetics, and introduces a number of interesting gameplay and combat mechanics. The non-linear exploration, progressive unlocking of new areas, and backtracking are generally enjoyable, and what lore and story exist are competent. Unfortunately, the developers don’t make good use of its great combat mechanics due to poor encounter design and an excessive number of easily missable combat abilities. In addition, rewards for exploration tend to be bland and the short length leaves the world and story underdeveloped. The short and sweet Metroidvania experience Reverie Under the Moonlight offers is definitely worthwhile and will satisfy fans of the genre, but the aforementioned design shortcomings keep it from standing out from the pack.