DANGEN Entertainment released a new trailer for Bombservice’s Minoria at last weekend’s BitSummit indie game festival in Kyoto, Japan. The 40-second video, viewable below, showcases the side-scrolling action RPG’s combat system. Minoria is a spiritual sequel to Momodora: Reverie Under the Moonlight and follows Sisters Semilla and Fran as they venture forth under orders from the Church to stop witches from undertaking a heretical ceremony. Minoria is being developed for PC and Switch and is planned for release in 2019. 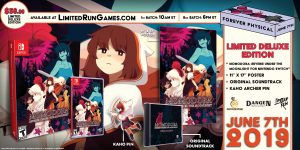 Momodora: Reverie Under the Moonlight is the fourth installment in the franchise and was first launched for PC in March 2016. The game is also available digitally for Xbox One, PlayStation 4, and Nintendo Switch. Those looking to read more about the game can check out Charalampos Papadimitriou’s review of the PlayStation 4 version.