Ah, Hyperdimension Neptunia. My love-hate relationship with this bizarre, half-parody, half-allegory RPG franchise from Compile Heart and Idea Factory is well documented. It’s been three years since the last mainline game in the series was released, despite the fact that Neptunia remakes and spin-offs have been coming out faster than you can say, “What the goodness?” The wait is over, and the fourth entry in the series has arrived on the PS4: the confusingly titled Megadimension Neptunia VII — that’s “vee-two,” not “seven.” And guess what: it’s actually pretty good.

The stories of the Hyperdimension Neptunia franchise have always relied on a certain level of flimsy allegory, and Megadimension is no exception. This time around, the game’s story is a celebration of the Sega Dreamcast, as represented by the new character Uzume, a look at the console transition from current to next-gen, and, amazingly, a look at clickbait journalism and the dangers of misinformation. As is typical for the series, the game’s story regularly pokes fun at itself and at the common tropes seen throughout the video game world. The fourth wall is not just broken, but obliterated, and on a frequent basis, usually by the series titular heroine Neptune, who has taken to calling herself the “Protagonist of Protagonists” this time around. While the dialogue isn’t quite as sharp as it’s been in past entries, the story is nonetheless filled with ridiculous moments, and it’s easy to get swept away by the sheer insanity of Gamindustri and its inhabitants.

The best aspect of the story, however, is its structure, which is surprisingly unique and brilliantly assembled. The main reason the game’s title has been renamed Megadimension Neptunia is because the story is actually split into three separate “games,” each with their own unique titles. The first is Zero Dimension Neptunia Z, and follows Neptune and Nepgear as they find themselves in the devastated, post-apocalyptic alternate reality of Zero Dimension. The second game is Hyperdimension Neptunia G, which is further split into four substories starring each of the four CPUs — Neptune, Blanc, Noire, and Vert — as the main character. This chapter focuses on the arrival of a mysterious group called Gold Third, four characters who represent major video game developers in Japan, specifically Square Enix, Capcom, Konami, and Bandai Namco. It also involves a mysterious group called AffimaX, which are controlling the flow of information throughout Gamindustri and spreading rumors and lies. Finally, the game reaches its conclusion with Heart Dimension Neptunia H, which wraps up all the unanswered questions from the previous two games. While the separation into “games” is really just disguising the story’s three acts, it’s nonetheless a clever and appropriate structure for a Neptunia game. 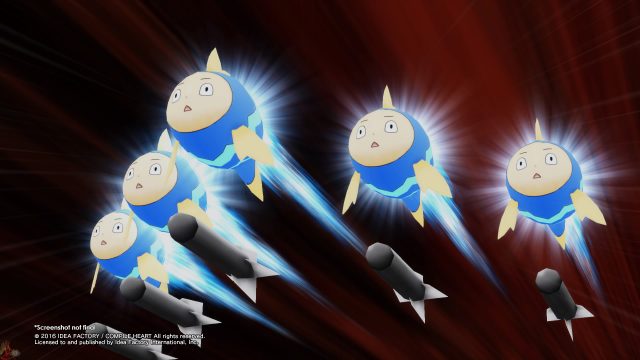 Behold, Umio! In all his fishy glory!

One of the more interesting aspects of this particular entry is that the allegorical stories throughout the game are shockingly strong. Much of the game focuses on fairly general, nonspecific ideas, but two major events in the history of the game industry are particularly well handled: the collapse of SEGA following the release of the Dreamcast, and the merger of Squaresoft and Enix in the early 2000s. Overall, however, Megadimension Neptunia‘s story is just an excuse to make silly gaming jokes and provide tons of fan service. And boy is there a lot of fan service. Fair warning to anyone easily offended: stay away from this game, and the series in general.

Neptunia fans probably know what they expect from the story, but the gameplay is often hit or miss. Thankfully, Megadimension Neptunia improves a great deal over its predecessor, and brings it back in line with the quality of Hyperdimension Neptunia mk2. The core of combat remains similar to both mk2 and Victory: on each character’s turn, they can move around within a certain radius, and then choose to attack, defend, or use a skill. How each of these systems is implemented, however, has improved a great deal. For starters, the game’s combo system has gotten a major overhaul. Each weapon in the game has a certain number of combo slots for the three types of attacks in the game: standard, power, and rush. Power attacks focus on raw damage, rush attacks on hit count, and standard on a balance between the two. Each character can equip any of their learned combo attacks in any available slots, but to make things more interesting, most combo skills also have a linking ability. If certain attacks are performed in a certain order, they’re guaranteed to be criticals, meaning that even weaker skills remain useful later in the game if they’re able to link a better combo. Couple that with the fact that different weapons have different slots open, players can expect to be editing their combo lists on a fairly frequent basis. One weapon might allow for two attacks of each type to be equipped, while another might allow for three power but two of the others. Still other weapons might allow for four rush, but only one power and standard. Slots are so important, in fact, that often a weapon with weaker attack power will be stronger on that virtue alone.

Skills have also seen an overhaul that makes them much more interesting. Every character learns a variety of standard skills that draw from the SP parameter, which is pretty typical for RPGs, but the EXE drive helps to mix things up a great deal. The EXE drive is shared between all characters, and can be used to power a huge number of special abilities. It builds up with each combo hit characters make, and ever so slightly when characters take damage or use attacking skills, up to a maximum of four points. These points can then be spent to activate the CPU’s and Gold Third’s transformations. They can also be used to activate each character’s unique special attacks, all of which are quite powerful, as well as coupling and combination skills, attacks involving multiple characters. It’s an extremely useful resource, and since it fills quite rapidly and resets to zero after every battle, it’s as useful in normal encounters as it is in boss fights.

The biggest problem with the combat is an odd game balance. While it’s still a huge improvement over Hyperdimension Neptunia Victory, there are a few quirks that can occasionally make it frustrating. For one thing, the way damage is calculated is quite baffling. In many cases, one or two levels can be the difference between taking too much damage from an enemy and taking none at all. On top of that, there are a few places in the game where the boss fights suddenly jump in difficulty, usually for only a single fight. At other times, most notably during the CPU stories in Hyperdimension Neptunia G, players are forced into battles with only a single character against enemies that deal way too much damage. In those cases, grinding isn’t even an option as players don’t have any safe havens to return to at the time. Overall, however, Megadimension Neptunia VII is fairly easy. 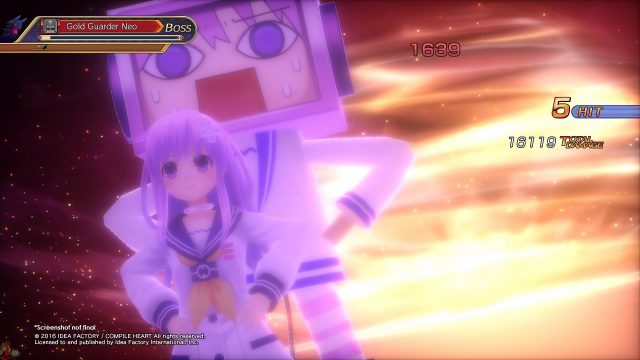 Nepgeardam, the most powerful robot to ever live!

A number of non-combat features from Victory return in an improved form, as well. The Scout system, where players can send NPCs into dungeons to search for new enemies, items, cash, or even new, hidden dungeons, has been greatly improved. Scouts all take roughly ten minutes of real time, with some variation, to complete an exploration, and this time ticks down constantly, whether players are in a battle, a cut scene, or just navigating the menu. Quite often a group of scouts can go out and come back in the time it takes to watch a cutscene. Even better, scouts automatically head back out once they’ve reported in, so players don’t have to spend very much time managing them unless they want to change their destination. It’s not all good, however: scouts can only report in when players are in town, so they’ll be left idle while exploring a dungeon. They can also only report in when they’re in the same dimension. This only really applies to the Heart Dimension H final chapter, but it’s a nuisance when it does crop up.

An irritating change has also been added to the world map, one which is sure to aggravate players to no end: random encounters. Now, random encounters may not seem like such a bad thing, but keep in mind that this is not an over-world map, but an icon-based map a la Super Mario World. Imagine if Mario had to occasionally fight random packs of goombas while moving from level to level in that game. That’s what it’s like in Megadimension Neptunia VII. When one does crop up, the movement to the player’s intended destination is also interrupted, meaning players will have to reselect their destination once the battle is over. It adds absolutely nothing to the game other than needless frustration.

There are a lot of other neat features players can engage in – simple hunt and fetch quests, a battle colosseum, a slew of optional boss enemies that can be uncovered in each dungeon, an extensive crafting system, and more, but much of it is optional and not necessary to enjoy the game. A lot of it requires players to really dig in deep, so those who want to really get invested in the gameplay will find a lot of stuff to take part in.

With the move to the PS4, the visuals of Megadimension Neptunia VII have received a nice upgrade, though they’re far from being the cream of the crop of what the system can produce. A lot of the environments and enemies are simply upgraded models from previous games, but there’s still a lot of new areas to see, most notably in Zero Dimension Z. The music has the same sort of unobtrusive quality. It’s decent, and in some cases quite good, but generally fairly unremarkable and easily forgotten. The voice acting, thankfully, is very good. There are a few places where it’s lacking, but for the most part, Neptune and company’s ham-fisted exuberance is delightful.

With surprisingly enjoyable gameplay and a cleverly structured, often hilarious story, Megadimension Neptunia VII is the perfect entry point for those new to the series as well as a great new outing for long-time fans. While the abundance of fan service may turn some people off, those who can look past it or genuinely enjoy it will find a fun, silly game that’s easy to relax with. It’s the best game in the series to date: truly Top Nep. 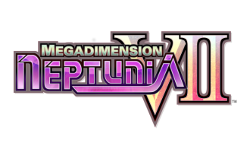