Demon Lording It Over

Felistella’s Maglam Lord came with enough intriguing elements to give it potential as a title that could punch above its weight. It certainly has its moments: an engaging cast and story make for a largely lighthearted but entertaining narrative experience. However, repetitive gameplay and poorly tuned combat make getting to those good bits too much of a mindless chore, overshadowing its bright spots with a general malaise.

Maglam Lord puts players in the role of the Demon Lord Killizerk, with players able to choose a male or female version. This doesn’t affect the story or player options, letting players feel free to choose whichever they’d like without missing out on anything, but does alter some of the flavour text due to their slightly different personalities. Feared at the height of their power, Killizerk finds themselves defeated after their enemies team up. Some time later, they awaken without most of their power and joined by their two closest subordinates in a generally peaceful future world, where they are the last Demon Lord left.

Given special endangered status by the new world’s overseers, Killizerk finds that there are still threats to this new world in the form of mutabeasts. After discovering that defeating the mutabeasts helps them to replenish their power, Killizerk starts taking on jobs and is put together with a pair of sibling heroes who have also come from their old world and are themselves the last remaining members of their group. As they continue fighting off mutabeasts, they recruit more allies and uncover hints that the world is not all it seems to be. 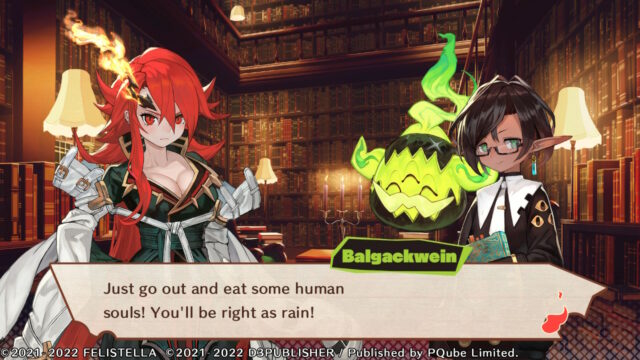 That’s your cure for everything!

The story — created by Summon Night’s Kei Miyakozuki — is easily one of Maglam Lord’s strongest elements, thanks largely to the entertaining cast. Killizerk is a thoroughly enjoyable protagonist who is not properly evil but simply does whatever they want — if much of the time that involves displays of power and/or rage — and that comes across in their responses, both scripted and player-selected. The rest of the supporting cast creates a varied mixture of personalities and goals, such as the adventure idol who wants to become an investigative journalist, which leads to lots of entertaining back-and-forth. Despite a few minor quirks, such as the é in café displaying as a question mark, the localisation is otherwise strong and ensures the narrative and story events remain entertaining throughout.

Additional lightheartedness comes in the role of the mysterious Love Guru G.G., who determines that part of Killizerk’s power problems comes from being “soulstarved”. The solution to this is for Killizerk to find their soulmate by building up their relationships with their allies and eventually going on dates with them. While ultimately this ends up being more of a sideshow than anything actually resembling a dedicated dating sim system, it makes for a fun diversion and gives the characters further opportunity to provide entertainment.

The gameplay cycle has players taking on numerous missions, returning to Killizerk’s manor after each one. There is a linear set of story missions, some of which will simply be a cutscene without any combat, plus an assortment of optional missions that expands as players go through the story, including a few character-focused side stories. Each combat mission puts players into one of the game’s limited array dungeons, and tasks them with either defeating specific enemies or obtaining certain items. 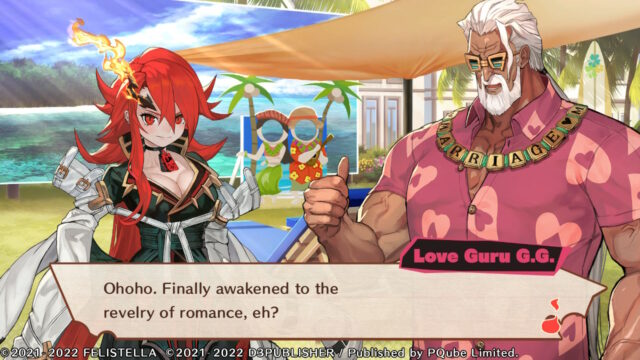 What else is a Demon Lord to do when not slaying mutabeasts other than go bowling or to the hot springs?

Dungeons are interesting enough to explore the first time around, with resource points and occasional treasure chests dotted around, but the limited number and the fact that players will often find the objectives in the same places means they quickly become overused. Players may find it helpful to undertake each of the extra missions to keep their level and equipment around what the game recommends, but other than that there’s really no reason or appeal in undertaking them for any other reason.

While dungeons are largely top-down, with a few 3D elements within them, combat wholly takes place in a 2D side-scrolling arena and begins whenever players run into an enemy. Combat sees Killizerk inhabiting the weapon used by their chosen partner and is largely a hack-and-slash affair as players wield one of their three equipped weapons — sword, axe, or lance — against their foes, able to switch instantly at the touch of a button. Each enemy has an icon next to their health bar to indicate which weapon type they are weak to, and though there are also elemental weaknesses to consider, the weapon type plays the biggest role in determining attack effectiveness. Players can jump and block in addition to having access to a variety of skills and items, but really the main thing players need to do is generate combos through regular and charged attacks.

The problem with combat is that it just isn’t well executed or balanced. Players will quickly learn that going all-out on offense is usually the most effective and in fact safest way to go about things. Playing defensively is not a good option since blocking is far too slow to be used reflexively; it’s much easier to keep enemies off-balance and not give them the opportunity to attack. This even applies to the bosses that don’t stagger, as many of their attack wind up flat-out missing players who are right next to them. It’s trivial to gain enough medical supplies to heal through hits, and being defeated just lets players retry the battle for no cost. Meanwhile, when players do give enemies freedom to act — particularly those with long-range attacks — it can quickly get annoying. If players do come across one of the very rare challenges, they can fall back on Killizerk’s powered-up form once the DG meter is filled, which quickly destroys all but the toughest bosses. 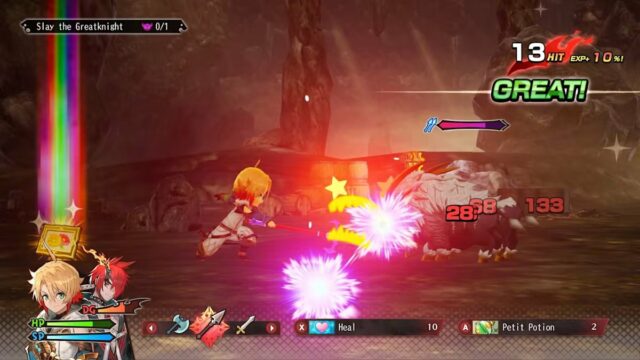 Maglam Lord‘s visuals can be divided into its visual novel-style story scenes and mission gameplay. The character art and backgrounds during events are pleasing to look at with expressive artwork and portrait variations, as well as small animations that help them look alive. The combat visuals highlight blows with a brief slowdown whenever a hit connects, and it works decently as a stylistic choice granting a slight sense of oomph behind them, but the environments and limited enemy types are quite generic and quickly wear thin. The Japanese voice acting is enjoyable to listen to, but the music is entirely forgettable and one can get weary of the battle cries.

There are standard RPG character growth elements — including standard defensive equipment and an easily missed skill learning system — to add some depth to the game, but these never require too much engagement and largely serve as some quick busywork to slightly break up the repetitive mission structure. The most complex of these systems is weapon crafting, where players create new weapons using resources and rewards earned from missions. Each weapon can be customised with trinkets, coatings, or stickers that apply boosts or special effects while being reflected in the weapon’s appearance. It’s perhaps the deepest part of the game, but diluted by the balancing as one can readily just create and equip whatever new, more powerful weapon is available and be done without paying much attention.

Maglam Lord has enough that some will thoroughly enjoy their time with it, particularly those looking for an enjoyable story and cast. However, it’s brought down by uninspired missions and poorly realised combat. It’s certainly not a bad title, and thankfully the issues that are there are such that they don’t create an active barrier to progress, but the entertaining parts are steadily diluted enough that the experience as a whole misses out on being something to be fully celebrated.