It’s taken a few years, but the first game of Level-5’s football (the game doesn’t call it soccer, so we won’t either) series Inazuma Eleven has finally managed to get an English localization. The Inazuma Eleven franchise shares some very basic similarities with Pokémon in both its main target audience and format. The charming and fun gameplay go a long way in making Inazuma Eleven pure entertainment for all ages and not just its young target audience.

Inazuma Eleven follows Raimon Junior High School’s football team in its attempt to win the Frontier Finals Tournament. Unfortunately things aren’t currently looking good for Raimon, as the club only has seven members, and goalkeeper Mark Evans is the only one interested in training. Players take control of Mark, whose first task is to find enough members so the club can actually play a full match. Matches in Inazuma Eleven come in two varieties, a small four-a-side game used for random battles and the standard eleven-a-side matches for both story-related matches and optional, friendly matches outside of the storyline. Random battles can take place anytime Mark is wandering outside, except during certain points in the plot, and uses the same system as regular matches, just shrunk down in size. There is certainly potential for annoyance due to their frequency, but this is thankfully limited by both the highly enjoyable and intuitive control system, as well as the quick speed with which they are completed. In addition, failing one of these random battles is far from a disaster, with the only result being the loss of a miniscule amount of currency.

The battle system itself is reminiscent of Final Fantasy X’s Blitzball, although directly comparing the two is somewhat unfair to Inazuma, with the faster pace and much greater character control leaving it standing head and shoulders above Blitzball. Matches are controlled exclusively through the touchscreen, with locations of passes, player movement, and so forth all controlled by the stylus. These basic touchscreen controls are both intuitive and easy to master, helped by decent AI that will automatically move squad members into useful positions. The RPG aspect of the system is provided through use of the skills that set Inazuma Eleven apart from the regular, boring football that can be seen in real life. Skills can be activated when opposing squad members interact with each other, such as when tackling or shooting on goal. Inazuma football runs on the rule of cool, with defenders making tackles by literally creating walls or strikers turning the football into a comet. An issue players may have is the influence of luck on these contact situations, such as when two members of opposing squads attempt to use a skill at the same time. In this situation, only one of the two will be activated and it’s never made entirely clear why a skill wins, although luck certainly plays a part in it. Luck also seems to play a big part when it comes to the referee, who adds a nice bit of extra depth, but is completely random in his decision-making. One feature impressively coded into Inazuma Eleven is a fairly accurate offside rule, so Level-5 deserve some kudos for figuring that one out. 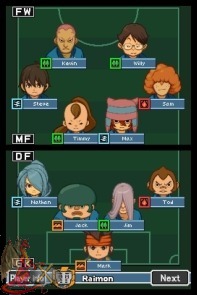 Raimon students are taught the importance of crazy hair from a young age.

Player development keeps a distinct RPG feel, with attributes, levels, experience points, and a representation of hit and skill points all making an appearance. Matches end up being decided by a mixture of both the squad attributes and the ability of the player to use some good tactics. Leveling up is a relatively painless process, with liberal amounts of experience points given to all current squad members after every match or random battle. Players do not get a choice as to how each squad member levels up, but are able to equip attribute-boosting boots and accessories in addition to being able to teach two additional skill moves on top of ones automatically learnt. Players have great control over the make up of their team, being able to pick from a number of formations that will increase as the game goes by, not to mention deciding who to include in their match squad of sixteen and in what positions they will play. There is a ridiculous number of possible squad members to recruit, which increases as the story is advanced. This ensures that every team will be individually tailored to each player. In some circumstances the plot may force up to four players to be taken along, but the freedom outside of this remains.

If the characters or art style of the game weren’t big enough hints as to the intended target audience of the game, the plot and localization efforts make it obvious, sometimes painfully so. Fortunately, the charm of the game and characters result in the plot ending up being bearable, but do not expect anything new or impressive from the storytelling department. The story itself is completely bonkers at times, in a world where school football is serious business, but this helps lend itself to the charm. Unfortunately, while there are a good number of plot twists and secrets in the story, the handling of them is poor. Either the reveal will come from absolutely nowhere or be so obviously hinted at that any possible surprise is already long gone. The level of language used in the game isn’t very high either, though it’s completely understandable because of the game’s target audience. In many cases, however, it seems like it goes too far in terms of its simplicity.

For the most part, the game is nothing special visually. The sprites used while wandering around Inazuma town and for the match play are very simple, and the same goes for the actual town itself. There’s nothing outright bad about them, but they lack both detail and uniqueness. On the other hand, the 3D rendered skill moves and stadium come to life superbly along with the unfortunately rare fully-animated cutscenes. Musically, Yasunori Mitsuda’s soundtrack is excellent and a perfect fit for the game, being able to instill the character and charm that the visuals sometimes fail to do. The only black spot music-wise is the opening song, which has been atrociously converted into English, but at least will manage to fall into the “so bad, it’s good” category for some. The small amount of voice acting is reserved almost entirely for Captain Mark Evans. It’s a bit of a shame as the few lines delivered by other characters give great variation to those scenes. Even Mark’s voice acting is very limited, sparingly used only in a small number of cutscenes and for in-match reactions to goals being scored. It’s not entirely clear whether this is a blessing or a curse though, as limiting the ridiculous amount of Britishness from his accent does both prevent him from becoming too grating and allow the excellent music to come through more. 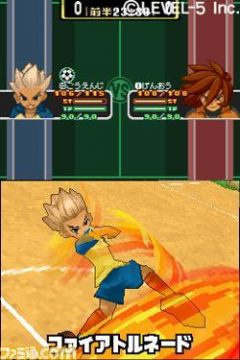 Inazuma does tell you that this is impossible to do in real life.

One thing Inazuma Eleven does severely lack is anything resembling a difficulty curve. After figuring out the controls and some basic tactics full matches quickly become very easy five or six-nil thrashings. It’s disappointing as it somewhat takes away from the big story games, especially with all the build-ups given beforehand that they’re really tough games. Inazuma Eleven also ignores an important and more than decade-long staple of sports games by not including at least an option to increase difficulty, which is a shame as such a feature could easily extend the game’s play time by a large factor. There’s a distinct lack of any puzzles or extra difficulty outside of matches either, with players given very explicit instructions on what to do next to advance the plot. If players solely focus on the main plot alone, the game can be completed in fifteen hours easily. However, there’s a plethora of additional content, including the massive amount of playable characters to recruit. Loading up a completed save effectively dumps players back to the story just before the final match, but does unlock a series of extra matches which can be completed for item rewards.

There is no denying the huge appeal Inazuma Eleven has in store for younger gamers. However, that shouldn’t mean older gamers should so casually dismiss it as there is fun to be had from it by all ages. Inazuma Eleven is an enjoyable game that will probably work best for more mature gamers as a quick kick around or a nice change of pace from the more serious games out there. The short and mediocre writing of the plot, as well as distinct lack of challenge prevent it from being right at the top of the table, but Inazuma Eleven’s irresistible charm makes it a pleasure to play despite its childish flaws.