It look a lot longer than thirty seconds, but the Time Goddess and her indentured servant heroes are back! The follow-up to the PSP cult hit Half-Minute Hero has finally made its way to North America, a move that surprised just about everybody. Though the game is no longer present on a handheld system, Half-Minute Hero: The Second Coming managed to find a happy niche on Steam, and brings back the quirky and unique gameplay that made the original so popular. The sequel brings with it a number of formula changes and an all new story, but unfortunately not all of these are for the better, and the game just seems to be missing the same spark.

Half-Minute Hero: The Second Coming stars the money-grubbing Time Goddess, who once again watches over the adventures of various heroes and offers them her time-manipulating services for cold, hard cash. There are once again five story modes to choose from, each unlocking after the previous one has completed, and each features a descendant of Hero from the original game. Like the previous game, each takes place in a different time period, though this is one place where the game really stands out from its predecessor. The first two story modes take place in Goddess Era 600, one hundred years after the final chapter of Half-Minute Hero. This era is very similar to the previous game, a traditional fantasy world. However, the third story mode takes place in Goddess Era 800, which has transformed into a steampunk wonderland very, very reminiscent of the world of Chrono Trigger. The fourth story takes place in Goddess Era 999, a post-apocalyptic hellscape. The fifth story mode, which is the game’s finale, is an interesting surprise.

The variety of settings in the game is terrific, and the localization is excellent, featuring goofy, charming dialogue that rings completely true to the previous game, an impressive feat considering that the localization of each was handled by two separate companies. That said, the pacing is a bit rough around the edges, which drags the game down a bit. The first two story modes in particular lack the same quality humor that made Half-Minute Hero a success, largely due to those modes’ angsty protagonist, but thankfully the last three modes more than make up for it. Unlike the previous game, The Second Coming also includes a colossal supporting cast, which helps to keep things interesting and entertaining. 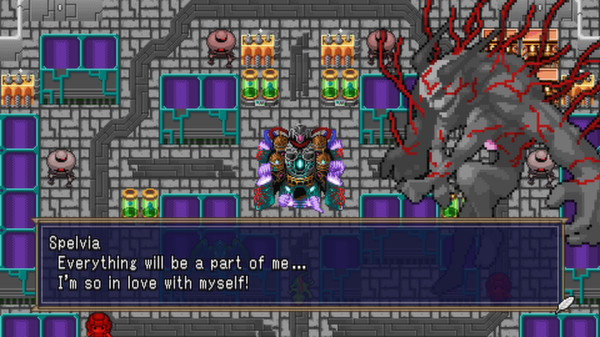 Narcissism is something of a running theme throughout the game.

One thing The Second Coming does right is eliminating all the alternate gameplay modes from the original title. Instead, the entire game is made up of the original’s Hero 30 mode, which plays like a hyper-fast traditional JRPG, but with a thirty second time limit. Players rush around the map, fighting enemies by running into them until they are dead, leveling up at a rapid pace, and eventually fighting the Evil Lord of the area, thus saving the world. Naturally all this usually takes a bit longer than thirty seconds, so players can pay to reset the clock in towns. The price goes up each time, so players must move quickly and finish each map with as few resets as possible. Once a quest is finished, all the experience and gold earned is lost, but players get to keep any items and equipment that were acquired. For the most part, it plays almost identically to the original game, which is a good thing.

The Second Coming throws a few new features into the mix, however. Most prominently, there is a significant untimed portion to the game that players can engage in. Between thirty-second quests, players can explore previous areas, visit towns to purchase items, explore special dungeons, and even fight monsters. They can even gain levels permanently, which carry over into quests. This feature gives the game a more cohesive feel, as each of the various maps are connected to the others. Unfortunately, it also inadvertently hurts the game’s raison d’être. With the ability to buy gear and gain levels outside of the thirty second window, there’s little to no reason for players to spend precious seconds trying to buy new items during quests. It also doesn’t help that several quests are far too long for their own good, and failing these quests multiple times can be extremely frustrating.

A few other new features have been thrown into the mix to make the game’s seventy-five total quests more interesting. The Hero Castle is one such feature, which is just like a regular castle, except it has legs and can fight monsters. Players will encounter gigantic monsters that require the Hero Castle to defeat fairly frequently, as attempting to fight them outside of the castle will result in an instant death. Unfortunately, as time wears on, this feature winds up being more of a nuisance than an interesting gameplay facet. It’s particularly frustrating that players sometimes have to avoid giant monsters in order to progress, as the heroes move so quickly that accurate movement can be difficult. Similar difficulties arise in areas with narrow passages. Players will also gain the ability to add new members to their party, a feature that was missing in the original game. Each party member has their own stats as well as a unique skill that will sometimes trigger during combat. There are also a number of gameplay modes outside of the standard story mode, including a multiplayer mode that allows players to cooperate to clear a quest. Most excitingly, however, is the addition of a map editor, which allows players to create and share their own quests via the Steam Workshop. 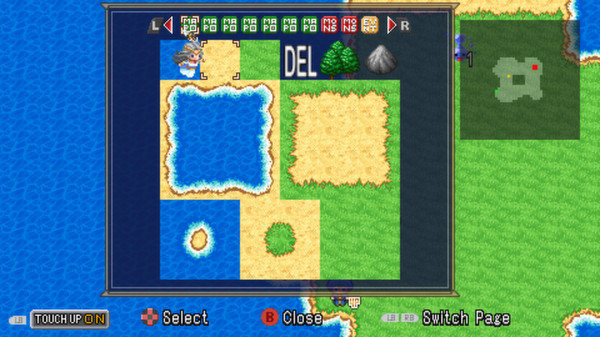 The map editor lets players make their own thirty-second quests.

Visually, Half-Minute Hero: The Second Coming adopts the same hyper-pixellated appearance as its predecessor. The game is colorful and charming to look at, and the blown-up Time Goddess sprites are particularly amusing to see on a big screen. One of the biggest surprises is just how good the music is. The soundtrack is extremely varied, and features not only the 8-bit inspired chiptunes featured in the previous title, but a number of more orchestral pieces as well, including a few vocalized tracks. The music changes frequently throughout the game, so players will rarely get bored of the audio.

In the end, The Second Coming is a mix of good and bad. Fans of the original Half-Minute Hero will undoubtedly be excited to experience more of the unique franchise, but at the same time, the new additions have a tendency to drag it down a bit. Although the alternate gameplay modes from the original were notably weaker than Hero 30, they offered up a bit more meat to the experience. Playing the same mode for nearly twenty hours will likely grate on some people, despite the quirky humor and often clever level design. That said, the game is easy to play in small bursts, and the addition of user-created content means players can get plenty of bang for their buck. Assuming, of course, that the Time Goddess doesn’t take it first.