And Leave No Man Behind

It’s always amusing when time finally catches up with a piece of near-future science fiction. It caught up with Planet of the Apes in 1999, with 2001: A Space Odyssey in (surprise!) 2001, and more recently, Back to the Future: Part II in 2015. This year, the 2006 PlayStation 2 trilogy .hack//G.U. caught up with its in-game timeline. Incidentally coinciding with the franchise’s 15th anniversary, Namco Bandai opted to produce one of the most unexpected HD remasters imaginable: .hack//G.U. Last Recode, an all-in-one collection of the 2006 trilogy, packed together with a brand new epilogue episode, .hack//G.U. Vol. 4: Reconnection. While it has aged a bit in the past decade, .hack//G.U. remains one of the most memorable RPG adventures around.

The .hack universe is rather complex, with many layers to it. At the top is the real world, which is only ever seen passively throughout the series. Players can get an idea of current events and the fictional modern history of .hack via forum posts and news websites available on the desktop. Just below that is The World, a fictional MMORPG developed by the fictional alter-ego of .hack developer CyberConnect2. The World is based on a fictional piece of epic poetry that went viral online before completely vanishing, and is the main setting of the .hack series. Finally, at the bottom layer is the subject of the .hack story, the mysteries and glitches that lie at the heart of The World, largely invisible and irrelevant to the majority of the game’s playerbase.

.hack//G.U. takes place seven years after the events of the original quadrilogy, and follows Haseo, a new player to The World. After being killed by other players on his first adventure in the game, he’s rescued by a player named Ovan, for whom he develops a profound fascination and respect. Ovan introduces him to Shino, a girl whom he develops a deep affection. After joining his guild for several months (the details of which are presented in the anime prequel .hack//Roots), Shino is attacked by a player called Tri-Edge, which places her in a coma in the real world. Haseo then sets off on a six-month vendetta trying to track Tri-Edge down, finally finding him in the same place Shino fell. Unfortunately, he is defeated and the loss finds his level reduced from one hundred and thirty-three to one. Believe it or not, this is where the game actually begins. The ensuing story spans three volumes (and the brand new, though rather brief, fourth volume) and anywhere from sixty to one hundred hours, with multiple twists and turns as the hidden mysteries of The World are unveiled and the machinations of a number of different factions play against each other. 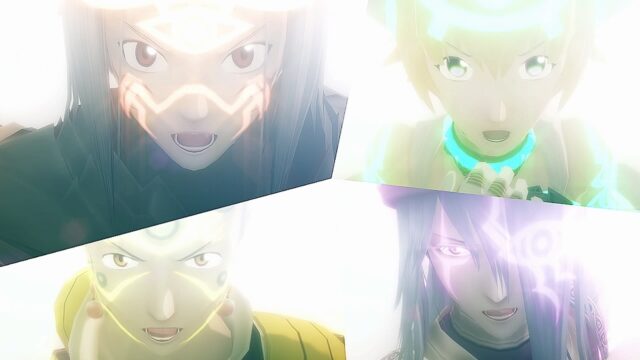 The lengthy and complex story is easily .hack//G.U.‘s strongest element. It features an enormous cast of interesting characters and a protagonist whose individual growth as a person is central to the plot and among the best you can find in a JRPG. The lore of the universe is rich and detailed, and even largely unimportant NPC characters with no role in the story receive some impressive character development thanks to the faux community forums built into the game.

While the gameplay changes and grows slightly between volumes, the crux of it remains mostly the same. Combat plays out in real time, with players taking control of Haseo and attacking with one of five types of weapons. In the beginning, Haseo can only use twin swords, but he gains access to a massive broadsword, a scythe, and dual guns over the course of the three volumes, with a new fifth weapon being unlocked in volume four. Skills can be activated by pressing the right bumper followed by any of the four face buttons, or by opening the menu. It flows remarkably well, and only gets better as the series progresses. For more information on how it differs between volumes, take a look at our reviews of Vol. 1: Rebirth, Vol. 2: Reminisce, and Vol. 3: Redemption. Although it starts off fairly simplistically, by the early parts of the second game it reaches its full potential, allowing players to switch weapon types on the fly based on the requirements of the situation. The ability to customize weapons and armor with special abilities furthers the strategic elements of battle, providing access to status ailments, HP and SP drain, and a variety of other useful effects.

The combat’s biggest flaw is also the game’s biggest flaw, which is the overall balance of the title. Unlike most RPGs, which see characters and enemies getting progressively more powerful as the game goes on, .hack//G.U. takes a slightly different approach. It takes precisely 1,000 experience points to reach every new level, and the amount of experience acquired from any given enemy scales rapidly depending on the difference in level. Defeating an enemy group several levels higher can net as much as half a full level, while enemies several levels lower will barely provide any experience at all. Damage dealt scales rapidly based on the level difference, making it the single most important factor in determining the level of challenge a battle offers. Although the game does a really good job of scaling each new story area to a rough estimate of where the player will be at that point, it’s really easy to become over-leveled or under-leveled, depending on your playstyle. Even completing a couple of non-story dungeons between events can seriously hamper the balance. 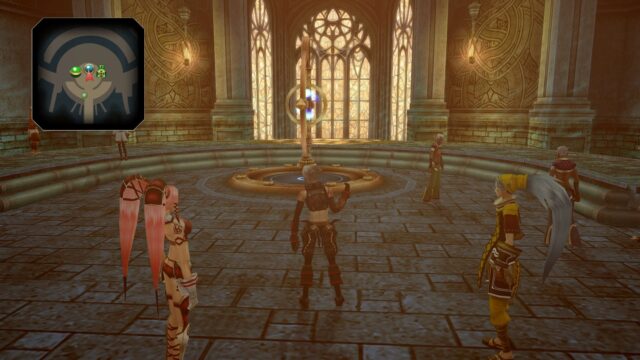 Maybe I’ll log out and check my email or something…

Between story events, Haseo can log out of The World and explore his computer’s desktop. On the desktop, players can check their email, visit the community forums, check their news feed, and play the collectible card game Crimson VS. All these things tie into the story in various ways, and the whole conceit really helps to build the game’s overall suspension of disbelief, firmly rooting players into the role of a gamer as opposed to just a character.

As an HD remaster, .hack//G.U. Last Recode‘s visuals are a nice improvement over the PS2 originals, though still show signs of its age. The character models have been nicely smoothed over, but the higher fidelity also highlights one of the game’s odder animation flaws: character mouths don’t move during most dialogue. .hack//G.U. was already a great looking game, so while it doesn’t reach modern standards, it’s still attractive to look at. The series also has a terrific score, especially the operatic themes of the game’s various “Lost Ground” areas. The voice work, while quite good back in 2006, has aged a bit but still holds up fairly well.

While Last Recode is a great opportunity for old players to revisit The World, or for new players to experience it for the first time, the new content, although brief, is a great addition to an already great series. .hack//G.U. Vol. 4: Reconnection is a fantastic epilogue that takes place roughly a year after the events of the first three games, and focuses on the last remaining unsolved mysteres of The World. This new volume includes a new combat form for Haseo, which is an interesting shakeup but in a lot of ways a step down from the previous form. The highlight of Reconnection, by far, is the story content. Despite only being a few hours long, it includes as many brand new FMVs as each of the previous volumes, all done in a beautiful new style. Most impressively, Bandai Namco was able to reassemble most of the original cast. Last Recode also includes a “parody mode”, a set of FMVs that have been redubbed and repurposed as joke skits, as well as the Terminal Disc files, which were originally only available on the special edition version of Vol. 1: Rebirth. This latter addition is particularly appreciated, as it includes a one-hour recap of the events of the original quadrilogy, along with details as to what happened in the seven years between games.

.hack//G.U. has remained one of my all-time favorite games for many years, and Last Recode is a wonderful way to reintroduce gamers to this terrific universe. Players both old and new will be able to find something to love about this classic ensemble of games, but for me, the most exciting aspect of Last Recode is a minor conversation players can have with the character Piros the 3rd at the end of Reconnection. As a graphics artist for CC Corp, Piros lets slip that a new project is already underway. While Last Recode is currently the best way for players to experience the world of .hack, the promise of a possible future for the long-absent franchise is the best gift of all.