Pig in a Poke!

During a time of great turmoil, a high ranking Count and his Countess are assassinated by a rebel force. Fearing the wrath of the King, Temperance flees to the Woods, chased by a mage and a ranger. Thus begins the chase in Gyromancer, a puzzle RPG combining the talents of Square Enix and PopCap Games. Though the initial premise is novel, the execution of the game falls short of expectations and lacks the necessary traits to be a solid game and not just an excuse to play Bejeweled. At the time of this review, it is important to note both the XBox and PC versions of the game have some stability issues. While these are hit and miss for many people, it’s not unusual to experience issues loading, crashing and/or freezing. Interestingly enough, in the PC version the game saves if the player so much as sneezes — a suspicious addition when combined with numerous crashes.

Welcome to Bejeweled Twist the battle grid, an eight by eight set of gems where all the action takes place. Take the role of Rivel through the game, who is a summoner of great renown. Pit one of his three summoned minions against wild monsters and deadly foes in a battle for supremacy. It may take a bit to grasp (particularly considering the tutorial is short and rather useless), but the steep learning curve is countered by the addictive gameplay. The cursor is a circle encompassing four gems. Click or press enter, and the circle of gems will rotate clockwise. The goal is to make sets of three or more same-colour gems. More complicated moves, such as netting four or more pieces, matching special gems, or hooking together multiple sets in a row, are all good moves to make. For each match made, the ability gauge of Rivel’s summon will increase — however, the ability bars of the enemy also increase. To maximize the amount of charge for the mage and minimize how much the enemy gains, match sets that are the same colour as Rivel’s minion. Each monster, friend or foe, has three abilities.

Each creature is associated with a specific element, and has strengths and weaknesses. Fire Wyrm, a red mob, is strong against white and green but weak to orange and blue. Only purple creatures are exempt from these rules, as they have no weaknesses, so the smart player will essentially always have a purple monster in their party of three, despite the fact that these monsters tend to have the most difficult abilities to activate. When a power gem lands on the board, it is highlighted depending on the type of monster: a yellow monster’s power gems crackle with electricity; the blue monster’s froth merrily with bubbles. Using these gems in a match will activate the monster’s abilities, which can be everything from direct damage to a poison to stealing an opponent’s ability and using it against them. Conversely, when an enemy’s ability bar fills, a skull is placed on the board with a number floating from it. Twist these gems into matches before the timer hits zero, or they will trigger causing damage and ill effects. 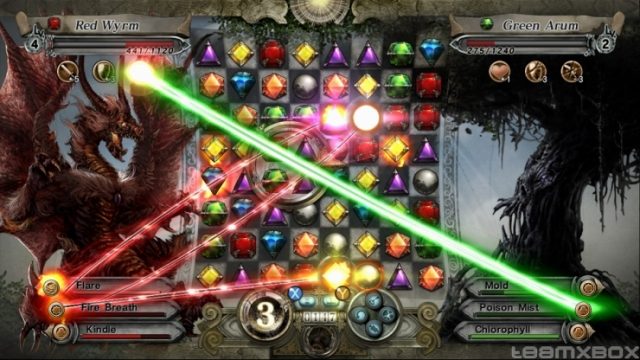 If a player cannot find a move that will create a match, there is still the option of an “Idle Twist.” This is a particularly annoying misnomer, as the nature of the game makes it possible for there to be no moves which actually create a match and instead forces the player to twist aimlessly. Whenever the player moves without creating a match, they are penalized with the skull timers counting down twice and the opponent gaining rapid increases to their ability bars. The game strongly discourages this, but forces the player to do this on a regular basis both to prevent the opponent from attacking and to set up better combinations. Though there’s no equipment and no abilities to customize, there is four items which Rivel can use to overcome tricky battles. Hock of Ham will immediately place all three current monster ability gems on the board; Magick Mirror reverses the twist for one move; Remedy removes all debuffs from the player, buffs from the enemy; finally, Magick Keys destroy all locks currently on the board. These items are scarcely found in the game, as looted chests never reappear, so is it important to ration them. The battle system is decent at its core, but a lack of correct information along with a lacklustre tutorial means that there is a steep learning curve for all players, even those familiar with the twisting mechanics.

The music is okay but ultimately forgettable, which feels unusual coming from a Square Enix game. The mediocrity of the music may also stem from the fact that there’s a total lack of variety, with perhaps six to eight unique tracks in total and one or two remixes of those. Conversely, care and attention spent on visuals is shown by how lush and varied they are and how they manage to give the game a stunning appeal using only two dimensions. From backgrounds to monsters and characters, even the various board effects are polished and delightful.

The difficulty in Gyro is for the most part under the control of the player. Though there’s no difficulty setting, the simplest way to tone down how tough new enemies are is to either return to a prior stage and grind on the easier enemies, or to jump into a newer stage, grab one of the Gyro Codes, needed to summon beasts in the Summoner’s Den, and exit the area. Either way, a player should have no difficulty keeping up with the pace of the game providing they fulfil all of the goals for each stage and not just move straight on after defeating the first boss. Though the game only contains a dozen stages, and most players can “win the game” within twenty hours, the stages are intended for multiple visits. Actual completion time will depend how quickly a person can adjust to the twist system. Additionally, completing the goals in the post-game content will occupy another five to ten hours easily, with the skill of the player’s rotational prowess contributing largely to all times.

The interface is functional but non-intuitive, even when consulting the control panel. Which button does what would make sense on a controller, but the mouse and keyboard settings are never explained. Many of the settings related to changing graphics and language options are only accessible from the main menu prior to starting or loading a game. Once inside the game, menus are again minimal, but navigation is not always intuitive and menu combinations can feel a bit awkward. The most telling example of this problem being how to play is split between two distinct menus, with half under Settings and the rest under Info. The one shining light found in the menus is the number of language options. For the multilingual, the game can be played in English, French, Spanish, Italian, German, and Japanese, which is a very nice touch. 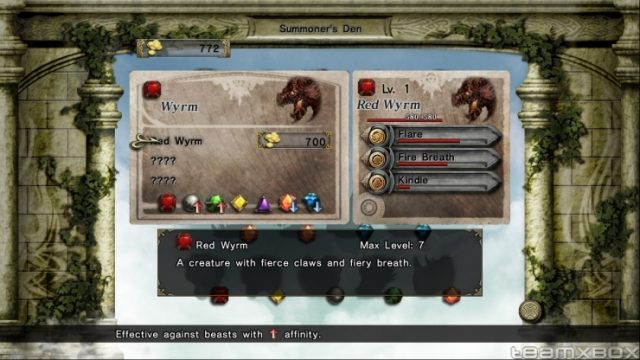 The game’s originality is a mix of generic and unique that unfortunately has more of the former and a lot less of the latter. The twisting idea is great, but the lack of support for players learning the system is disappointing. Not having to rely on damage icons falling into the grid helps eliminate the perception that the AI gets better moves than the player. As for the story, it has a nice slant, but the bulk of it is buried in a menu and has poor pacing, which may leave one confused and unmotivated to continue if the puzzling aspect wasn’t so addictive. Just watching the cut scenes leaves much to be desired and the old English occasionally feels forced. For those willing to read through the story menu, what’s there is entertaining, but in typical fashion the player is never actually directed to these additional details. Like many other aspects of the game the basic idea is solid but the implementation missed a few steps.

Players may find themselves coming into Gyromancer expecting Puzzle Quest and instead get Galactrix, for better or for worse. While the game has a lot of potential and is shiny on the surface, it lacks the depth and accessibility that prior puzzle-bending titles have offered and serves up a game that’s ultimately a Bejeweled Twist variant done up pretty. Though the compatibility issues with the PC version will hopefully be fixed in short order, the game still falls particularly short of expectations and should be approached with its shortcomings in mind. That being said, if Square Enix and Popcap choose to make a sequel addressing some of these issues, it would certainly be a solid purchase.