Knights in the Final Ogre Tactics

When asked about the use of trickery in times of war, the great tactician Sun Tzu said, “All warfare is based on deception.” Sun Tzu would understand the pitfalls of making too many comparisons between Sting’s latest US offering, Gungnir, and other games it superficially resembles. A game is not always “like” another game or directly comparable, except with a great deal of deception. Nevertheless, turn-based tactical RPGs tend to lean so heavily on the giants in the field that starting with comparisons seems prudent. Tactical RPGs are an insular enough batch that the first question when looking at a new one is often “Will it strand me on a rooftop with Marquis Elmdor?” or “How many times will I need to watch the Omega Wind animation to get to the end?” Gungnir is situated well within the tradition of familiar tactical RPG trappings and standards, but brings plenty of surprises to the table as well. Although it doesn’t soar above Final Fantasy Tactics or Tactics Ogre: Let Us Cling Together, the twin peaks of tactical RPG excellence, it strikes bravely in less linear comparisons. Gungnir‘s not the most original game, but Sting’s thoughtful flourishes on the genre encourage deeper investigation. The customization isn’t as rich as in Final Fantasy Tactics, and the story isn’t as grand as in Tactics Ogre, but both elements ultimately lend to the grimy claustrophobia that sets Gungnir apart from its peers. It is a game about desperate people, who, even at their most powerful, are caught in the tides of history and prophecy.

The story begins familiarly enough with a corrupt empire discriminating against a plucky ethnic minority. Giulio, son of the group’s martyred folk hero, soon finds himself the bearer of unholy Stigmata and a demonic lance capable of summoning hellish monsters. Although unhappy with the theological implications of his ace-in-the-hole, Giulio sets off on the warpath in search of bread, dignity, and equality. The story’s innovation shows itself in little ways, threaded among the familiar plot. There’s some subtle character work among the scheming prime ministers and noble knights. The most interesting thematic element revolves around the loss caused by even the most noble-seeming wars. It’s easy to fall into clichés about “acceptable losses” or “never leaving a man behind,” but Gungnir is generally above them. These reflections echo the melancholy of Sting’s Knights in the Nightmare, although never quite as heavy. Like the other games in the Department of Heaven series, moral ambiguity keeps the story moving. One of the great joys is watching how the motivations of Giulio’s allies clash throughout their campaign. Just because party members are willing to fight in combat scenes doesn’t mean their politics match. 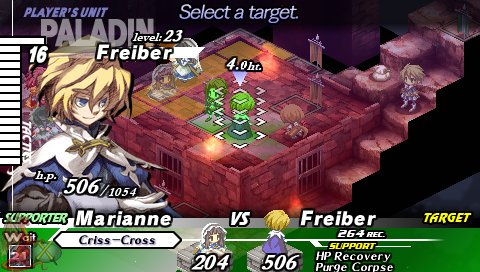 Most of Gungnir is spent locked in isometric combat. Although it looks like a standard tactical RPG, attempting to play it like one will lead to ruin. Boilerplate tactics honed from years of playing Final Fantasy Tactics are some use; however, cleaving too close to them can lead to rocky situations. Wait Time and Tactics Points are the two mechanics most responsible for Gungnir‘s learning curve. Unlike most tactical RPGs, each allied unit doesn’t receive a turn in a set order. Instead, the player has party actions that are buried among individual enemy actions. During party actions, any character can be selected and commanded. After a character performs an action, he or she cannot act normally again until the wait counter reaches zero. Simple actions, like moving, have a low Wait Time; more complex actions, such as attacking, take longer to recover. It’s possible to squeeze extra actions out of waiting characters, but the strain quickly reduces their maximum HP for the duration of the battle. Most battles allow a choice of general (or Ace); each Ace has favored units, which have decreased wait time. For example, archers, brutes, and javelin-tossing throwers tear up the battlefield while under Giulio’s command.

Managing timing is the greatest element of what sets Gungnir‘s combat system apart from other tactical RPGs; Tactics Points are the sword and shield for the task. Characters generate Tactics Points as they move, up to a paltry limit. Important areas of each map, such as hills and bridges, are marked by flags. Occupying a square with a flag captures the point, increasing the maximum number of Tactics Points that can be stored. Tactics Points can be used to issue a scramble order, bumping the player’s turn to the head of the queue. This move is invaluable in making last-second adjustments such as dodging spells and picking off critically injured foes. Tactics Points also fuel Beat and Boost orders, combination attacks by another name. The former are standard-issue dogpiles based on unit placement and made more effective by the number of captured flags. Boost actions allow a supporting character to benefit the primary attacker. Boost actions change based on the character’s equipment. They include lifesaving techniques such as reducing enemy block percentages and decreasing the attacking character’s wait time. Tactics Points also allow characters to deal extra damage, operate siege machinery, swap equipment at checkpoints, loot corpses, and tag out at Retreat Points. Although it’s tempting to zero out on Tactics Points to make one major, multi-unit attack, the need must be balanced against the chance that those points will be necessary to avoid an incoming fireball. Managing the flow of Tactics Points is integral to attaining three-star battle ratings and winning the war. 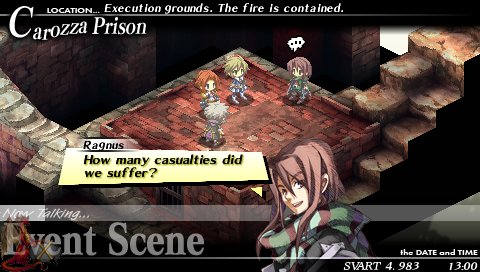 Ragnus looks far too happy to be asking that question.

As one may expect from all of these options, winning a war requires navigating a lot of menus. On the field, it’s not so bad. Characters have a limited number of attack options, bound by their specific weapons and weapon mastery. Outside of battle, the interface gets hairier. Army customization consists of hiring single-class mercenaries and equipping them. Since every character has a paltry five equipment slots and a weight limit to keep in mind, balancing the perfect team takes a considerable amount of time. A more robust way of visualizing changes between equipment layouts would have gone a long way in draining the tediousness from the checking and rechecking of battlefield minutiae. Luckily, at least on the lower difficulties, immediately mastering the system isn’t necessary. It will lead to quicker, more technically impressive fights though, so coexisting with the character interface is a task worth suffering.

Battles reward perfection, but don’t demand it. Given the notable challenge of Advance mode (to say nothing of Nightmare), this is a wise choice. Although non-story allies can die permanently in combat, it requires massive damage or an unfortunate circumstance like being pushed into a river. More commonly, running out of HP results in retreat and reduced maximum HP in the next battle. Attacks that destroy equipment are rare. Even losing a battle isn’t necessarily the end: retrying allows experience points and weapon mastery gained in the failed effort to carry over. Since there aren’t any random battles, retrying is the only way to grind for experience. However, doing so isn’t always the best option. Completing a battle within a set amount of turns without retrying or losing any units results in stars. For every star, a bonus treasure chest appears in the next map.

High scores and treasure chests aren’t the only way to keep playing after the main story’s finished. Like Knights in the Nightmare, Gungnir expects players to delve deeper into the story with the New Game+ mode. Every game with multiple endings and story paths should have some mechanism for saving the player’s time: Tactics Ogre: Let Us Cling Together‘s World system allows for exploration on a busy schedule. Gungnir isn’t quite so convenient, but it does allow for zooming through familiar event scenes and dialogue. New Game+ transfers gold, equipment-boosting gems, and most items between playthroughs. This is enough to gain a substantial leg up, but not enough to make a mockery of subsequent quests.

Hunting for extra endings is made more palatable thanks to the graphics and sound. The isometric graphics fit the somber nature of the conflict, but don’t take dinginess as an excuse to skimp on the details. Battlefield decorations like statues and mailboxes don’t just add texture to the world, they hide secret treasure! Naturally, the only way to get at it is smashing the offending feature into its component parts. Battlefields are varied, both visually and topographically. The soundtrack is split between two general modes: heroic fanfares and marches for battles and moments of hope, and gloomier pieces for when politics rear their sinister heads. Gungnir‘s central themes are amplified by their presentation.

Gungnir isn’t the most original game out there, but neither is it as bog standard as it first appears. The story is engrossing and the battles skillfully tease the line between challenging and punishing. There’s enough going on under the hood to keep arithmeticians happy, without making the game inaccessible to everyone else. Although there are dry patches where the plot’s too traditional, emotions fall short, and battles drag, the bittersweet realpolitik themes provide fair apology. Gungnir doesn’t outclass the giants of the tactical RPG world, but it’s a solid game that proves the genre still has new directions to explore.