Shall I Tell You About Angels?

Despite the release of the PS Vita seemingly shrinking the likelihood of further releases for its predecessor, the PSP has kept the fires going, most recently being rekindled with the release of CareerSoft’s Growlanser: Wayfarer of Time. This is a remake of the fourth game in the series, which was made for the PS2 and never saw release outside Japan. Wayfarer of Time features a slightly reworked story and more active potential roles for some secondary characters, although gameplay appears to have remained intact. With an entertaining story and engaging cast, Growlanser: Wayfarer of Time provides an entertaining experience overall, albeit one punctuated by points of great frustration.

Growlanser: Wayfarer of Time puts players into the role of Crevaniel, a mercenary with the Alten Schwart brigade. Raised within the brigade by its leader since he was a young boy, Crevaniel is soon a close witness to a scene of mass destruction caused by a six-winged angel, whereafter it is revealed that he is the key to stopping the heavenly threat. Against a backdrop of rising tensions and warfare between the four countries of the continent of Noievarl, Crevaniel must discover how he fits into defeating the angels as well as dealing with the many more immediate matters brought by the escalating conflict.

Wayfarer of Time‘s story is an interesting one that starts off well with the first destructive scenes and builds into a surprisingly effective political tale that engages throughout. Dating sim aspects make up a fairly large part of the game and story, giving players frequent opportunities to choose Crevaniel’s responses to events and questions, which affect his allies’ general opinions towards him. These aspects are further embedded in multiple vacations the party takes through its adventure to rest and allow Crevaniel to forge closer relationships (some of which can become romantic) with his comrades and acquaintances. While there is already a good amount of interaction contained within the main story, these vacations add a very appreciable amount of depth and development to the likeable cast. 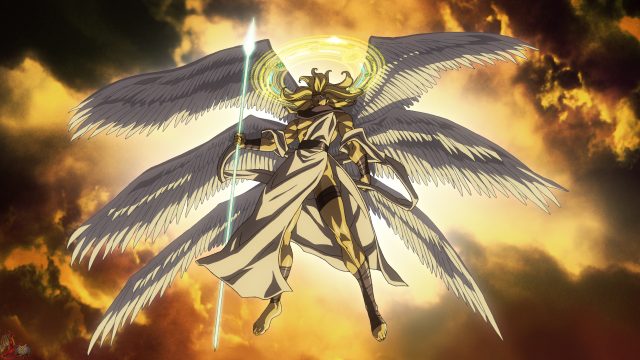 It never hurts to have a spare pair.

There are numerous epilogues to unlock, most focusing on a particular character, which rely on correctly selecting options during vacation days, or accomplishing specific side-quests. Only one ending can be unlocked with each playthrough, but most of the endings can be set up in a single run prior to a key selection point very close to the game’s ending. Admittedly Wayfarer of Time does have the issue shared by a lot of games with dating-sim aspects, whereby Crevaneil can gain the attention of almost every member of the opposite sex yet not have to deal with any complications that this may cause, but otherwise the ending system works well.

Although the bulk of the story is static, not counting an alternate ending route that is unlocked for the second playthrough, certain parts of the game allow players to rescue various characters from unenviable fates. When the player saves a character through the many means that make this possible, the game provides a chance to see what would have happened absent Crevaniel’s intervention. The details divulged of the unaltered character fates is brief, but thankfully those saved do continue to make appearances in future scenes and further motivation to prevent needless deaths is provided by the level of character given to those involved, particularly with the knowledge that they are dependant on the player’s actions. The fate system gives a nice feeling of involvement in the world, in addition to helping mix up some of the battles with extra objectives.

Basic combat can be described as a grid-less strategy game combined with Final Fantasy’s Active Time Battle system. Each character is issued a command (which can be altered at any time) and will carry it out when the individual timer below each portrait and health bar is empty. Simple tasks such as attacking are carried out repeatedly until otherwise instructed, while spells require a charge time before they can be unleashed, with more powerful spells resulting from a longer charge. Depth is further added with plentiful offensive skills, as well as status effects and buffs, while characters will have the preparation time for all activities increased if attacked. For the most part the battle system is enjoyable and deep, although the menu use can feel a bit excessive at times and there are a few shaky pathfinding issues that become noticeable in some of the more compact locations.

Battles are split between small skirmishes against compact groups of enemies found while exploring and the considerably grander story-based missions. While the skirmishes take place against whatever enemies happen to be on the screen at the time, the story missions will make full use of the entirety of the map, often against foes that number well into double digits. Completing each story mission results in a grade (Completed, Cleared, or Passed) dependant on how quickly the objectives were met, with more experience and money given for a quicker resolution. Most battles give players a decent challenge that builds up nicely for a time but unfortunately this trend does not apply for the entire game. At around the mid-way point it becomes more than happy to throw in some fiendishly difficult missions. Unless very overpowered, these missions require a perfect strategy that is often not immediately obvious until the mission has been failed a few times. This, combined with a relative sparsity of available save points (especially in a particularly galling case near the end), means that players will have to overcome some infuriating times to complete the game, enough so that many may be dissuaded from taking the trouble to try. 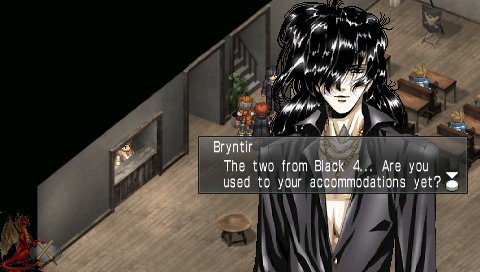 Equipment on its own is relatively straightforward, limited to a single item of armour and a special ring weapon. More than just providing a small attribute boost, however, the ring weapon also serves as part of the character development and skill systems. Each ring weapon has three slots with one of three colours assigned and in each slot a spellstone can be placed. These enable characters to gain the attached skills and special effects, with the effect reduced if the spellstone does not match the slot colour. Skills can be levelled up by keeping the spellstone attached in one of the ring weapon’s slots,a llowing them to be used even when one is removed. Some skills are vital to master and neglecting to learn them will prove to make things much harder as the end game approaches. Outside of this advancement is a standard experience system with very limited player input.

Wayfarer of Time‘s soundtrack provides a decent but not memorable audio background, although the ending theme is worth noting as a nice way to round out the overall mood of the story. While there have been complaints regarding the removal of the game’s Japanese voice acting due to licencing costs, it never really feels like the game is missing much without it. The localisation has been very well done, and the writing is such that emotions are evoked perfectly fine without need for any speech tones accompanying the lines. English voice acting is limited to a few fully animated cutscenes, where it does the brief job required (the apparent lack of a subtitle option to help mitigate the PSP speakers’ poor speech rendition is an annoyance). The majority of visuals come across as fairly dated, however, the gameplay and writing means that this isn’t an obstacle to enjoying the game. Most standard attacks are nice and quick, but spell animations are far too long. Thankfully though, these can be skipped with a press of the circle button, something players will learn to do very quickly. Satoshi Urushihara’s character portraits help bring life to characters and provide Wayfarer of Time with a distinctive look and the level of expression needed to convey its moods and conversations well.

Those prepared to battle through the tough times will find much to like from Growlanser: Wayfarer of Time, but a good number of players are likely to be chased off by some of the more frustrating parts. For me the enjoyable story and cast were more than enough to outweigh those sections where it felt like the PSP might go flying soon and it is a game worthy of serious consideration for those who enjoy the more story and text-heavy RPGs, even if those frustrating gameplay sections prevent a universal recommendation. On a whole it was an experience I would be happy to volunteer for again. 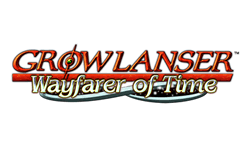