Fight for the Right (to Prestige)

I’ve played a good number of tactical RPGs, and Grand Kingdom nevertheless managed to throw a few new ideas my way. Its conception of a battlefield reminiscent of a board game is done well enough to stay interesting throughout, and the strategies it demands are often quite rewarding. It even manages the rare feat of seeming to end too soon, though the quantity of content on offer ensures that the initial story campaign is not the only thing to see. While hardly perfect, I enjoyed most of the time I spent with this one.

A new group has joined the foremost mercenary guild on the continent, and gets thrown into action to prove its chops. The voices for the group are Flint, a loquacious and amiable soldier interested in obtaining prestige, and Lillia, daughter of the guild’s leader and tasked with keeping this new outfit moving steadily forward. Early campaigns that do little more than provide a snapshot of the world lead into someone trying to revive the defunct Uldein Empire, a task that the mercenary guild must prevent by any means necessary.

Flint and Lillia frequently speak directly to the player, who takes the role of an unseen figure leading this mercenary faction. Grand Kingdom‘s storyline has the rare virtue of zipping by quickly instead of belaboring everything, and while the use of characters speaking directly to the screen is not exploited to its full potential it manages not to be annoying either. That means the villains don’t get much characterization, but a rival within the mercenary guild turns out to have a rather affecting subplot instead of being just an overly aggressive buffoon. The storyline involving the revival of Uldein’s empire is also not the only one within the game, and continuing through campaigns that develop the four nations occupying the continent extends the game considerably.

None of the characters with lines actually participate in battle — that role is filled by soldiers recruited by the player. Up to four of them can be placed into a squad, and whichever squads are not being directly controlled on a map can be dispatched elsewhere for missions that will accrue rewards without any additional input. The squad being directly controlled will move on a sizable map with multiple nodes that is similar to a board game in some respects, especially in its representation of other units as tokens that concurrently move for each action taken by the player. In addition to enemies, the boards feature hidden paths that can only be seen by moving the player token onto the relevant node, and a variety of obstacles such as boulders or briar patches to hamper direct progress. 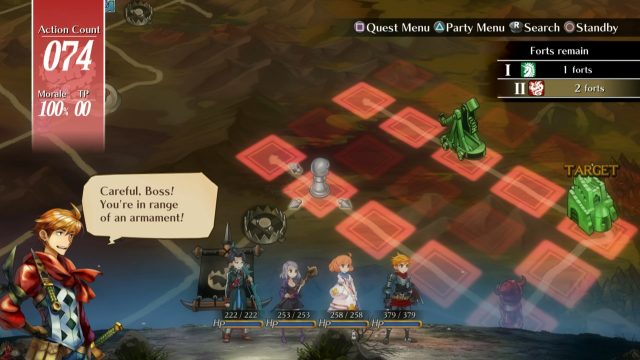 Which wouldn’t necessarily be a problem if that enemy wasn’t going to engage us within range of it… drat.

When the squad under control collides with an enemy, a skirmish takes place. Encounters occur on a field with three levels characters can switch between at any time, looking something like Guardian Heroes. Actual attacking bears little resemblance to a beat-em-up though, letting the player switch between several possible actions for each character that are mapped to the face buttons. A turn meter displays which participant will act next, something that comes in very handy for planning actions. Certain abilities can hit more than one target, and the game is not very good about reminding players of this, instead showing the hard way when something lobbed into the air will splash on both friend and foe. Certain battlefields also have armaments that automatically damage an area on the screen, which is highlighted for a moment at the battle’s beginning and then becomes indistinguishable from safe land — at least the opposition can be hit by these too. Enemies come in a wide enough variety that fights never become monotonous, and each skirmish lasts only a few minutes. Fights have more factors than simply smacking the enemy, as objects to enhance various characteristics can be placed on a field, and traps invisible to the opposing side are also an option. Characters can also choose to husband their remaining energy for the turn by guarding instead of emptying it through ceaseless attacks, although good timing is vital for making effective use of some classes’ skills. Eventually a wide variety of troops are available to the player for constructing a squad, and the differences between them require paying attention for success.

The wider goal that sends a squad onto each battlefield also varies enough to stay interesting. There are some missions in which everything must die, but also some interesting ones that demand resource seizure or keeping enemies away from certain spots for a set number of turns. Turn limits are usually present when taking on a mission, but they are generous enough to not be a source of stress, plus non-story battlefields will often let the player reduce the number of turns allowed to commensurately increase the reward upon completion. Losing a skirmish does not necessarily equate to a mission’s failure, as the squad will be fully revived afterwards. Since HP is not automatically restored after each skirmish, this can be a useful way to survive. Losing does cost a number of turns before revival takes place, and attempting a story mission with an underpowered squad will probably result in defeat from time running out. Non-story missions automatically adjust the level of enemies to conform to those of the squad taking part, which makes them a superb way of gathering resources.

Keeping track of inventory is a bit more convoluted than necessary, due to a few factors. One is the strict level limitations on new equipment, meaning that after a squad gains a couple of levels it is possible to kit its members with fresh things that must all be purchased. Another is that weapons and armor are specifically for one class of troop and no other, which leads to a very lengthy inventory screen once the possibilities have been broadened by gaining levels. Some items also need to be found by bumping into merchant tokens wandering the boards, not by going into the standard shop available between missions. These issues are bothersome, but in other aspects the inventory is clear and understandable, making the ailments surmountable. 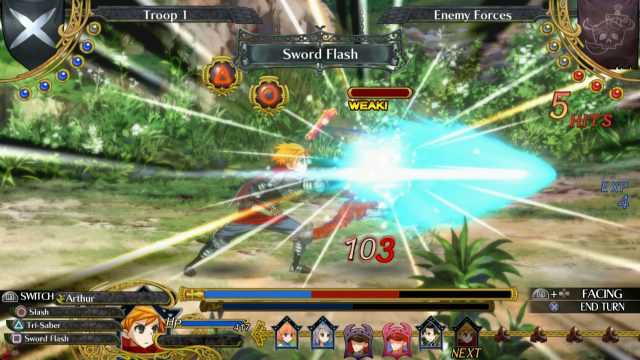 In this case, weak is not an insult but just a reference to the effectiveness of an attack.

Character portraits and locations are well-drawn without straining the Vita’s capabilities, but the fluid animations in combat are pleasing to the eye. Different equipment also tends to come with unique visuals, some of which produce rather amusing results, such as outfitting a team with fake beards or costume ball eyewear. Basiscape’s score comes with a good variety of tunes that effectively complement the action, including multiple battle tracks to prevent stagnation. NIS America’s localization did fine work on the spoken dialogue as well, though the option to listen to Japanese line readings is also present.

Grand Kingdom is not the finest example of a tactical game ever released, but it managed the none-too-trivial feat of keeping me interested and ready for more throughout the time I was playing. Enough of what it does is entertaining to make going around a battlefield fighting things a pleasurable event, and the story doesn’t try one’s patience. It probably won’t be a sales blockbuster, but Grand Kingdom deserves to be experienced by the tactical audience.