Sometimes games fall along the wayside. You don’t mean for them to be neglected, but you can’t help that you suffer from “Ooh Shiny!” syndrome when a new game comes across your plate. Once the newer shiny item has been completed, you move back to other things you’ve started, perhaps even a year later. You remember enjoying space travel and passing the Mountain Dew. You recall that Galaxy of Pen & Paper was a game you meant to review last year.

You panic and power through.

Behold Studios’ Galaxy of Pen & Paper has players crafting their own D&D party and prepping to reach the stars and further points of the galaxy. The Game Master asks the player to craft a party of heroes who begin their interstellar adventures helping the less fortunate, siding with rebels against an evil empire, and hoping that no one eats all the snacks. What is fun about Galaxy of Pen & Paper is that the writing is a love letter to pop culture and science fiction series like Lost in Space, Star Trek, and Star Wars, while different locations pay homage to classic science fiction writers such as Ursula K. Le Guin and Arthur C. Clarke. It’s entertaining to go through the various space systems and see the references being made to the various works and authors. 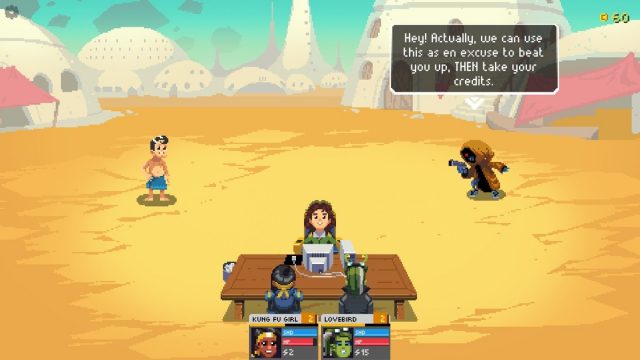 While these references are delightful, and the writing is cheeky, a little bit of proofreading would have been appreciated, as there are typos littered throughout the game and frankly the main story isn’t as interesting as it could be. The story is a barebones space adventure where the where the cast of characters is out doing good deeds for the galaxy, while also hoping to stop any foes along the way. The sidequests lack any real narrative, and while they are helpful to do for building experience, there’s no real incentive to check them out.

Galaxy of Pen & Paper puts eight unique classes at the player’s disposal, and is great at encouraging players to mix-and-match their party combinations. The classes feel balanced, each with a plethora of skills that can be compounded together to create a party that can satisfy the needs of the player. As characters level up, they are granted skill points that can be used to purchase new abilities that part of a global selection or class-specific. Players are not forced to have dedicated tanks or healers in Galaxy of Pen & Paper, and the game doesn’t penalize the player for switching classes mid-way through the game either.

There are also two styles of combat in Galaxy of Pen & Paper. One is the standard turn-based battle system wherein players select various skills that they wish to use on enemies, and vice versa; it’s nothing particularly special. The other style is one-on-one spaceship battles, wherein players roll the dice to determine the number of skills points they will have to use in that round. Throughout the main storyline, the party collects dice to strengthen their ship, moving from a four-sided dice and eventually hitting a twenty-sided dice. After the dice roll, players can choose to do a regular attack, change to missiles for higher damage output, heal, use a shield, or do an all-out attack. Since dice rolls are unpredictable, players will have to be strategic with skill points that they have each turn, and who knows if the enemy will end up with a higher die roll on its turn. These battles are a wonderful change of pace to the formulaic turn-based battles. 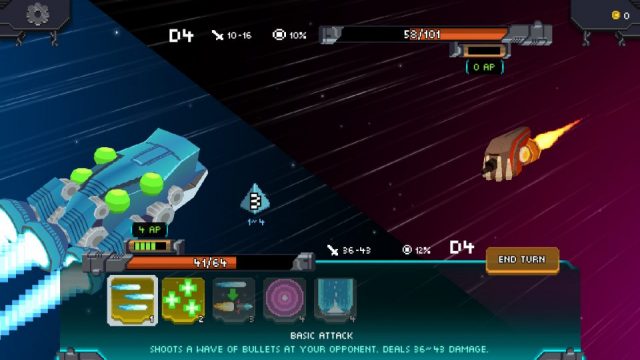 One issue regarding combat is the difficulty balance. While spaceship battles feel balanced, the turn-based battles do not. There are battles throughout the game where the difficulty spikes in ways that do not grow with the player. Some battles are hair-pullingly dreadful, but these are usually then followed up by battles that feel very trivial. While this may not be an issue for some players, it just seems a bit odd given how well the ship combat is presented in terms of difficulty.

Much like Behold Studios’ first foray with Knights of Pen and Paper, Galaxy sports vibrant and colourful 16-bit graphics, blending it with less-than-clean-looking 3D models for space and planetary exploration. It’s an interesting graphical balance that works for the game, even if it isn’t prettiest to look at. In terms of sound, the game offers a decent soundtrack, many of the tunes paying homage to popular science fiction franchises. Unfortunately, the soundtrack is quite forgettable, which is a shame given the game’s overall package of being a decent little time waster.

Although Galaxy of Pen & Paper isn’t a long game, clocking in at nine hours to just complete the main story, there is lots of side content to keep players coming back for more. I do wish Behold Studios had done something more to spice up the turn-based combat system into something more engaging, but I also appreciate the experimentation that went into the spaceship combat. While Galaxy of Pen & Paper doesn’t push any boundaries, it stays true to its 16-bit roots, offering a fun exploration into outer space, and a great excuse to hang with your friends, eat some pizza, and roll some dice. 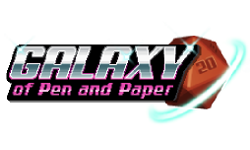