Alchemy is a powerful force that can be used to transmute one thing into another, but it is not without limits. The law of equivalent exchange punishes those who attempt to gain something without offering something of equivalent value in return. The Elric brothers, Edward and Alphonse, broke this law in order to bring their mother back from the dead; Al lost his body and Ed his leg. By sacrificing an arm, Ed was able to save his younger brother by binding him to a suit of armor. The action RPG Fullmetal Alchemist: Curse of the Crimson Elixir takes place years later as the two brothers investigate a prophet who appears to be using alchemy to gain influence in the city of Lior. Of course, the investigation quickly turns sour, and the brothers must rely on their ability to fight.

Players control Ed, though they have minor control over Al’s actions too. Ed can perform quick combos while adding in alchemy moves to cause slashing or piledriving damage as well. He can also create road blocks to ward off enemy ranged attacks, such as fireballs. As the game progresses, he also gains the ability to transmute swords, lances, and hammers out of the ground, each of which has its own uses. If that wasn’t enough, there are also random objects scattered about that can be turned into various weapons or bizarre items. As Ed levels up, bonus points are gained that allow players to customize him. While much of it is gimmicky and battles still consist primary of hack and slash, they’re still a nice addition to mix up gameplay and keep things interesting. 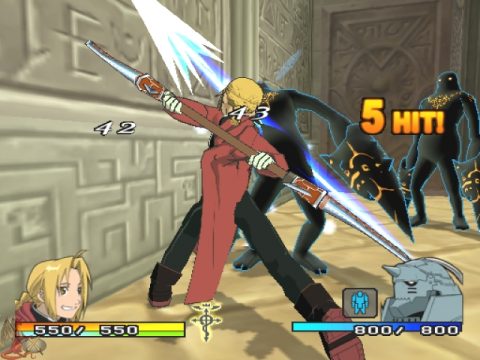 Plenty of interesting weapons to choose from

The battle system fixes many of the minor problems the original had, but the camera is still a bit of a problem at times, especially when fighting enemies that move at very high speeds. Enemies also have a habit of sneaking up on Ed due to camera issues. The artificial intelligence has been upped as well, but control of Al can still be problematic. One other minor problem is that items don’t appear on radar, so just as much time has to be spent checking the defeated enemies for loot as is spent defeating them in the first place.

Speaking of dropped items, enemies drop them with high frequency, especially with certain accessories equipped. Normal enemies are generally very easy and don’t require items. Bosses are a bit harder, but healing items are so abundant that it’s almost impossible to die against them unless the player neglects to pay attention to their health. Al can also be revived at almost any time using alchemy.

Despite the fact that it is an action RPG, Fullmetal Alchemist 2 focuses almost as much on the story as it does on the gameplay. While there aren’t any NPCs to talk to, the story unfolds at a good pace and is rarely lacking. Another chapter or two would have been nice, but it still manages to do a good job even though the game itself is on the short side. 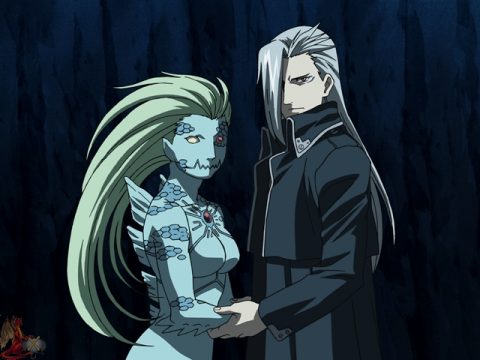 The main quest clocks in around a mere eight hours. Since there isn’t much to do in the game besides level up Ed and Al in order to try to get a higher rank, even those who spend quite a bit of time leveling up will probably beat it in less than twelve. The only thing resembling a sidequest is finding cats that appear in strange locations.

The visuals are, by far, the best part of the game. Cel-shading, frequent anime cutscenes, and detailed character portraits are among the main reasons the game looks good. Unfortunately, many of the enemies fought throughout the game are very similar in appearance and nature, but this is only a minor drawback in an otherwise beautiful game.

Unfortunately, the music isn’t nearly as good as the visuals. While some of the boss tracks and sound effects are quite good, most of the background tracks for dungeons and whatnot can get old very quickly, especially the track that is occasionally played in the presence of golems.

Fullmetal Alchemist 2‘s battle system isn’t great, but it does fix some of the problems the original had. The storyline is also one of the stronger aspects of the game, and the frequent cutscenes are a nice bonus. While none of the aspects, aside from the visuals, really stand out in the crowd, it’s still a decent choice for those new to the series and a good choice for fans. Due to the length of the game and only minor replay value, it’s really more of a rental game.