You Got Those Scrawny Little Arms Just for Huggin’ Your Mama?!

Finding strategy RPGs of the Japanese persuasion that venture outside the time-tested rubric of grid-based combat can be a challenge. Sometimes it requires traveling far from our comfortable shores to distant lands in Southeast Asia. This is a magical place where Japanese publishers are releasing games localized in English ready for adventurous souls who want to take the plunge on games that won’t otherwise come west. That’s how I managed to play Full Metal Panic! Fight! Who Dares Wins, a game developed by B.B. Studio, which is best known for the Super Robot Wars series. FMP! Fight! is based on a light-novel-turned-animated-property originally released in the early 2000s that is currently experiencing a revival. So is this a hidden gem that Bandai Namco has provided a backdoor for English speakers to experience? Not exactly, but FMP! Fight! is a competent anime tie-in that fans of the show will enjoy, even if the game isn’t ideal for enticing new entrants.

Full Metal Panic! primarily centers around two characters: Kaname Chidori and Sousuke Sagara. While she may look like an ordinary high-school girl, Kaname is a Whispered, a person who has knowledge of technology far beyond what should be currently available. Understandably, governments and other nefarious organizations are interested in people with this remarkable ability. Thus enters Sousuke, a member of a mercenary military organization called Mithril. Mithril orders Sousuke to go undercover at Kaname’s school to protect her from those — in particular a rival organization named Amalgam — who might threaten her. While Sousuke is around the same age as Kaname, he has grown up on the battlefield as a child soldier, leaving him with a lack of typical social experience that leads to numerous misunderstandings. The series balances slice-of-life antics with Sousuke’s military missions involving Arm Slaves (AS), this world’s version of mechs.

FMP! Fight! picks up where the third animated season — The Second Raid — left off. After suffering numerous setbacks at the hands of Mithril, Amalgam has decided to take the gloves off in its efforts to capture Kaname. Now she will have to decide if her freedom is worth the cost it may cause to her friends and loved ones. The first half of the game tracks the plotline of the fourth season — being broadcast at the time of writing — while the second half offers a satisfying wrap-up to the overall story. While the tutorial attempts to retell the first three seasons of the story in a few missions, it’s only really appropriate as a refresher for fans rather than a comprehensive on-ramp for newcomers. The plot is laced with references to earlier events — including some taken from the original novels and never animated — and players without prior knowledge will be left confused. Nonetheless, for fans, it is an engaging adaptation and the finale is well handled and satisfying.

The characters in FMP! Fight! are just as entertaining and engaging as they were in the show. Mao, Kurz, and Clouseau are there to join Sousuke in battle with enemy mechs. Teletha Testarossa, the sixteen-year-old submarine captain, is back to foil Amalgam plans. This even applies to new entrants, such as the particularly hilarious Commander Courtney, who obviously takes cues from R. Lee Ermey’s character Gunnery Sergeant Hartman in Full Metal Jacket. The story and characters achieved the balance of humor and seriousness that Full Metal Panic! is known for. 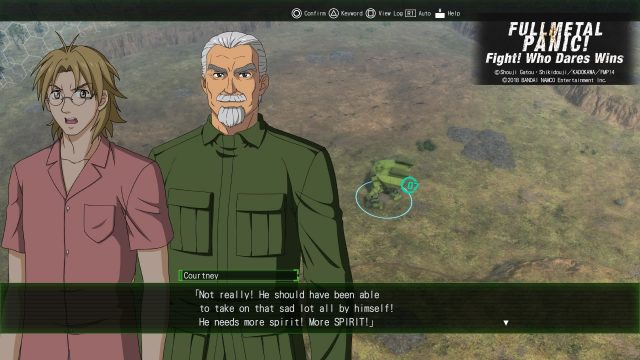 As mentioned earlier, FMP! Fight! is a tactical RPG. However, rather than employing grid-based combat, units are able to freely move around the battlefield. During each character’s turn, two circles will appear around the character’s mech: a red circle to show weapon attack range and a blue circle to show potential movement range. Even though these are ten-meter-tall mechs, they still use human-style weapons, sized up appropriately. Handguns, shotguns, sniper rifles, and missile launchers are all available to equip. While sniper rifles and missile launchers have the advantage of doing more damage from greater range, the game balances this by limiting ammunition and not letting players move and attack in the same turn.

Mechs, as well as the pilots, have significant customization options. Money is received after each successful mission, allowing players to upgrade hit points, armor, or other attributes such as the weapon-carrying capacity of the AS. Meanwhile, the pilots accumulate a shared pool of points that can be used to upgrade their stats as well as unlocking special battle skills. Levels and stats make noticeable differences to hit percentages and damage.

Besides free movement, the other unique feature of the battle system involves different parts of the AS having individual hit points. The mechs have overall (body) hit points as well as hit points for the head, arms, and legs. Each of these can be individually targeted and doing damage to the head and arms reduces accuracy and weapon damage while attacking the legs can cripple enemy mechs, thereby restricting movement. It’s an interesting system that FMP! Fight! unfortunately does a poor job taking advantage of. There are a few interesting missions utilizing this system, such as one where enemy mechs are carrying off supplies and so must be disabled but not destroyed, but the majority of missions are of the “kill everyone” type and only a few boss encounters truly reward strategic targeting of enemy parts. 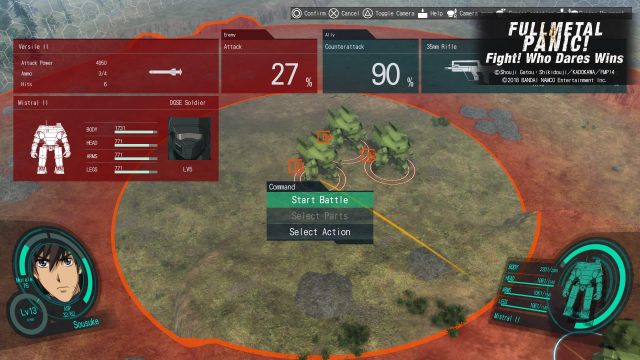 The maps sure are bland and boring.

The maps lack in visual flourish as well as anything that could be considered interesting tactical design. Most of the maps are single-colored open areas, with nothing of interest to catch the eye. This also contributes to the vapid nature of the majority of combat. With few obstacles on the maps and the enemies being fairly easy, most missions devolve into moving the party into enemy range and trading blows until it dies. Once again, there are a few exceptions to the tedium, like urban missions that give a tantalizing look at what could have been. After hours of enduring simple forest map after plain tundra map, these urban environs are an oasis in a desert of blandness. Thanks to weapons requiring line-of-sight, the tight streets between buildings introduce a welcome tactical consideration to movement. One of the better missions involved a rare time when Sousuke was outgunned by the enemy. Darting from alley to alley, engaging in a fighting retreat while moving from one side of a city to an extraction point was a fun challenge. These sorts of missions were simply too few and far between.

The graphically-underwhelming maps are a prelude to the graphics as a whole. The story portions are told in the traditional visual novel format of character portraits on backgrounds. The portraits are basic, with no movement, and they, as well as backgrounds, are reused too much. FMP! Fight! also has a limited amount of full-screen artwork, and this leads — especially in the later portions of the game — to times when it is unclear what exactly is happening just from the text. One character who was in a helicopter crash seemed to simply appear later in a facility out of nowhere. Only later was it explained that the helicopter crashed down a large elevator shaft in the facility. A piece of art showing that happening would have been handy to avoid confusion.

Music in FMP! Fight! is lifted from the show and is perfectly fine and forgettable. Bandai Namco managed to recruit the Japanese voice cast from the show for the game, giving all major characters voiced lines, and the performances are excellent. The great voice acting helps ameliorate the lack of visual storytelling and brings the story to life, even though it isn’t in English. The English localization also deserves note. While some earlier Southeast Asia English releases suffered from spotty translations and a lack of editing, nothing could be further from the case with FMP! Fight! The localization quality easily matches western localizers, with only the occasional battle quip that could be questioned.

Full Metal Panic! Fight! Who Dares Wins is so bound to the property it’s based upon that it is difficult to separate the two. The story is an adaptation of the fourth season of the show (as well as continuing beyond) with limited help for non-fans. The tactical gameplay, while having some interesting concepts, lacks in difficulty and execution that otherwise might have warranted strategy fans braving a story that isn’t suited to the uninitiated. FMP! Fight! gives fans an interactive way to experience the fourth season and have a satisfying conclusion to the overall story, but there probably isn’t enough here to warrant the general RPGamer public importing this game.