Poor Tingle. He never gets any love. Always a lover, never a fighter, silly Tingle thinks he can achieve greatness. What’s a poor thirty-five-year-old virgin to do? I suppose he could throw some rupees into a magical pond and make a few wishes. A trip to Rupeeland? Sounds splendid! But wait! There’s a catch? Well, crap. I guess Tingle has a lot of work ahead of him if he ever wants to make it to the Big Rupee in the Sky. Freshly Picked: Tingle’s Rosy Rupeeland is Tingle’s first spin-off adventure outside the Legend of Zelda series, and boy is it gonna cost you a few rupees and brain cells to get through.

Tingle’s story begins the moment he steps outside his door and finds a pond full of magic and wonderment. When a voice calls to him at the wishing pond, Tingle meets Uncle Rupee, a man with a rupee for a head, who offers Tingle the chance to experience paradise: a one way trip to Rupeeland. There’s a catch, of course: Tingle must continuously offer rupees to support the tower that will send him to Rupeeland. The more rupees he feeds the pond, the closer he gets to achieving true bliss, or so Uncle Rupee tells him.

Freshly Picked is an oddball of a game. It’s quirky, funny, and even crude at times. Its localization, while not the strongest in terms of dialogue, does its best to adapt the insane humor presented throughout Tingle’s adventure. While it’s fun to read what is going on in Tingle’s world, players never quite entirely understand what exactly is going on. Everyone has a crisis and it’s up to Tingle to help. Why? No real reason other than Tingle’s a good guy, and often rewarded with rupees.

This brings us to the game’s biggest issue: the importance of rupees. Rupees are everything in Freshly Picked. They are Tingle’s health and currency, and are needed to fund nearly every task performed in the game. Rupees are needed to progress to each new area, and the problem is that it never feels like players have enough. Part of the trouble comes from a lot of the guess work involved in terms of paying out for certain tasks; it’s impossible to know whether or not Tingle is overpaying someone for a service, which is why it may be integral to have a FAQ at hand to ensure that he is paying the best prices without being ripped off. The game will always inform Tingle when he is underpaying, but it’s hard to manage how many rupees is too much. Even if players overpay by a small margin, the problem then becomes not having enough for Tingle’s health, or to pay for other services, such as bodyguards who protect him from wandering enemies. 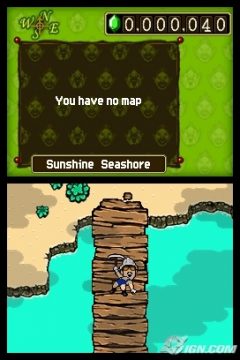 Speaking of bodyguards, they too come at a hefty cost. Considering players must first pay a commission to hire one, and then pay another fee on top of that, their services become extremely pricey as the game goes on. Players probably could have Tingle fight alone, except for the simple fact that he sucks at it. Tingle will get into scuffles when contacted by an enemy, and players need to tap the enemy with the stylus very quickly to ensure that Tingle doesn’t lose too many rupees in the fight. A bodyguard is pretty much mandatory to ensure that Tingle can conserve rupees for other tasks, but every time the companion faints, Tingle must then fork out more rupees than the original commission price in order to revive his fallen ally.

Another issue with the bodyguards comes from their incompetent AI. Tapping on the bodyguard will get them to huddle close to Tingle, but this becomes a nuisance when attempting to solve puzzles. Since nearly every puzzle in Tingle is stylus based, bodyguards tend to get in the way of performing actions such as moving objects to their correct placement. Even if you whistle the bodyguards away while solving a puzzle, they’ll return a second or two later to pester you further. Sometimes the bodyguards simply don’t respond to your commands at all, making them rather fickle at fulfilling their function.

One interesting feature is the stylus use in Freshly Picked. Although Tingle is controlled with the D-pad, everything else in the game uses the stylus. From attacking enemies to gathering items to cooking recipes, everything must be done via the stylus, and for the most part it works fairly well. Those who enjoy a looting aspect in their RPGs should take note that there is lots to collect and create in Freshly Picked. Another neat use for the stylus comes from being able to map landmarks for rupees. Each area has one that can be purchased and filled in. Once Tingle has found every landmark in that area, he can then sell the map to the cartographer for a hefty sum. This is one of the easiest ways to achieve rupees, and the rewards for map completion are always worth the extra work. 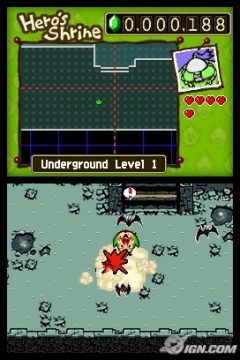 The only downfall to this collection aspect is that it is mostly mandatory and requires a lot of backtracking. Backtracking, while irritating, is important to ensure that Tingle gets the maximum number of rupees within each area. This plays heavily into the player’s rupee count, as each time Tingle approaches the wishing pond, he’ll be left with only a small handful of rupees to work with in the next area. However, considering that the majority of items respawn, it is possible to collect more rupees every time you backtrack, even if it’s in small quantities. Having to backtrack to ensure that Tingle has enough rupees to progress gets very tedious, but it’s a key facet in how the game must be played.

Another great use for the stylus comes in the form of Freshly Picked‘s boss battles. Every single boss battle has a stylus gimmick that is needed to win. In some cases, it may be used to drop Tingle Bombs on the boss’s head, or perhaps used to fling Tingle up a mountainside like a sling shot, or even having Tingle participate in his very own shmup. While there are only six boss fights in total, each one is packed with a new gimmick that works surprisingly well, making every fight a blast to discover.

For a DS title, Freshly Picked has some incredibly high quality visuals. Not only is the game rich in colour, but every environment fits the quirky atmosphere perfectly. Every item, enemy, and character is loaded with personality and plays nicely into the game’s overall presentation. Visually, the game feels like the result of the Beatles and the Village People going on an Absinthe-fueled tour of Ireland, and Tingle is the Green Fairy!

One feature where Freshly Picked falters is its audio production which lacks the same crispness of its visual counterpart. The audio quality is not the best and there’s not a lot of music to really critique. Tingle’s voice in particular is strange, as he mostly whimpers, whines and moans. Not that anyone expects him to have much of a voice to begin with, but it does become creepy fairly quickly. One other bit of failure on Freshly Picked‘s part is the lack of an autosave, and the game’s one and only save point which appears in Tingle’s house. Had this game had an auto-save function, it would be a much more portable friendly game, and having to backtrack to Tingle’s house to save becomes frustrating as dungeons become large and long as the game progresses.

Freshly Picked is a weird, odd, questionable little DS game. There are a lot of positive aspects to work with, considering it has a great collection feature and mostly responsive DS controls. The game does so many quirky things that it’s almost loveable in a way. The things that Freshly Picked fails at, however, are things that will frustrate and annoy players and force them into constant rupee-grinding. For all its eccentricity, Freshly Picked will drive most gamers into rupee-madness. Greed will consume even the most gentle-hearted into farming for rupees until it devours their very soul into mush.